There's evidence that it's possible to produce a change in genes through meditation. Although it's still early to draw definitive conclusions and establish the impact this may have on health, important advances have been made. 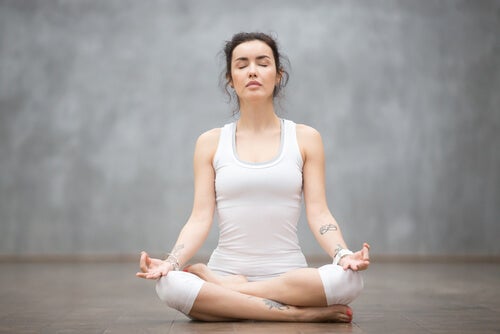 Dr. Susan Lee Smalley has argued that it’s possible to achieve gene changes through meditation. In fact, she isn’t the only one who has made a claim in this regard. However, Smalley is one of its most important advocates due to her extensive knowledge in the field.

Susan Lee Smalley is an anthropologist with a Ph.D. in medical genetics. She’s the director of the Mindful Awareness Research Center (MARC) and one of the first people to talk about gene changes through meditation. She claims that research shows changes in at least 15 genes in people who meditate.

Smalley has argued that neuroplasticity, the ability of the brain to change as it has new experiences, would also have effects at a genetic level. She’s stated that what’s most interesting about the change in genes through meditation is the fact that it would be a way to self-induce profound modifications through voluntary experience.

Some time ago, scientists believed that the genetic information each person was born with was unchangeable. They thought that it was a kind of definitive programming, decided from birth. Over time, they’ve re-evaluated this. These days, we know that genetic information is, in fact, highly flexible, and that this applies to all ages of life.

One of the research projects that proved that flexibility, and that later gave rise to the study of changing genes through meditation, was conducted by Michael Meaney, at McGill University in Montreal. He and his team observed epigenetic changes in the brains of rodents that hadn’t received sufficient maternal care during their first weeks of life.

This led to chronic stress in the animals from an early age. Females that had undergone this epigenetic modification also behaved carelessly with their own offspring.

However, if they were replaced by loving foster mothers, the young grew normally. This showed that genetics was flexible and, also, that mental experiences could produce changes in genes.

A revealing study of gene changes through meditation

The University of Wisconsin-Madison conducted a study on meditation, obtaining striking results. This is one of the pioneering works on the subject of gene changes through meditation and is of great value.

What the researchers did was analyze the bodily changes that occurred in two groups of people. One group mediated, while the other carried out silent activities not associated with meditation.

In the end, they discovered that those who meditated had experienced modifications in the genes RIPK2 and COX2. These are related to inflammatory processes.

The molecules that made these changes evident were analyzed at the Institute of Biomedical Research Barcelona (IIBB-CSIC-IDIBAPS). Perla Kaliman, the main author of the article, pointed out that they had detected an epigenetic alteration in the genome due to meditation. However, she clarified that it’s still too early to draw definitive conclusions.

Based on studies, it’s now possible to postulate the idea that stress produces epigenetic changes and that meditation can reverse them.

Likewise, Susan Lee Smalley claims that people who reach the state of so-called “full attention” experience more activity in the frontal cortex, which affects the sensation of serenity. If they keep this going for some time, then genetic patterns of stress change.

It’s important to note that epigenetic changes are modifications that can “silence” some genetic factors. Experts conclude that this is the reason why DNA doesn’t determine our “fate”.

For example, a person may be born with a gene that predisposes them to cancer but an epigenetic change can “silence” that gene. Hence the importance of all these studies and their possible conclusions.

Meditation Techniques for Beginners
Today, we'll share some meditation techniques for beginners that'll help get you started on your journey to a less stressful life. Read more »