Surprise: A Fleeting and Unexpected Emotion

Surprise is the most fleeting of all emotions. It comes on suddenly, and disappears just as quickly. 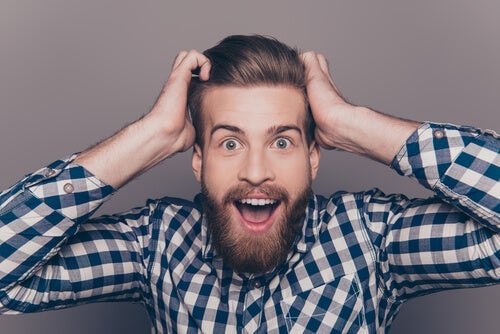 What if you didn’t react at all when someone threw you a surprise party or gave you an unexpected gift? You’d be missing out on one of the six basic emotions! Surprise is an often forgotten but intriguing and unexpected emotion that people experience when life catches them off guard.

The world of emotions is endlessly fascinating. When most people think of the basic emotions, they usually come up with happiness, sadness, anger, and fear. They tend to leave surprise and disgust off the list, although the latter has gotten more attention lately because of its role in the movie Inside Out.

In this article, we’re going to explore the most fleeting and unexpected emotion: surprise.

Surprise is a sudden emotion that you experience in unexpected situations and contexts. It comes on quickly and immediately ties in with other emotions that are relevant in the given situation.

But why does surprise quickly lead to another emotion? Well, imagine that you’re walking by yourself, and suddenly someone jumps out to rob you. Or you get home and someone is waiting for you with a bouquet of flowers. How do you react? The first emotion, in either case, is surprise, of course, but what follows depends on the situation. In the first situation, your surprise will be followed by fear or anger. In the case of the flowers, you’ll probably feel happy. Thus, surprise is consistent with the context.

In addition to your emotional reaction, you’ll experience an increase in cognitive activity. That allows you to analyze the factors associated with the surprise and connect it with the relevant emotion.

As we mentioned above, surprise, along with happiness, anger, fear, sadness, and disgust, is one of the basic emotions. According to Paul Ekman, a psychologist that specializes in how people externalize their emotions.

The characteristics of surprise

Surprise isn’t positive or negative. It’s actually a neutral emotion. Here are some of its primary traits:

Surprise is important because it encourages curiosity and learning. In addition, it can affect your beliefs about other events. For example, if someone takes an unexpected stance on an issue, their arguments become surprising and usually more persuasive.

The effects of this unexpected emotion

Surprise also helps you react and behave appropriately in an unexpected situation. It actually stops the residual activity of the central nervous system that could prevent you from having a reaction appropriate to the demands of the situation. It also has physiological and subjective consequences, which we’ll explain below:

The physiological effects are those related to the way your body functions. When you’re surprised, two kinds of activations occur:

Also, unique bodily expressions accompany surprise that you’re probably familiar with. You raise your eyebrows and upper eyelid, your pupils dilate, your mouth opens, and your jaw drops. Depending on the degree of surprise, you might bend your knees a little or learn forward. Sounds such as “Ah!” and “Oh!” are common responses.

These are the effects based on the judgments and feelings of each individual. Their duration depends on the moment in which the later emotional reaction happens. Consequently, they facilitate the movement towards the next emotion.

The main subjective effect is a phenomenon called “a blank mind”. It happens because a situation catches you off guard and it’s hard to give an explanation of what’s happening right at that moment.

Surprise is also a difficult feeling to define due to the number of stimuli that can cause it. On the other hand, surprise often acts as a prologue or prelude to other emotions. In other words, after feeling surprised, you’ll often feel happy or angry.

The prologue-like nature of surprise is perhaps what makes it so fleeting. That doesn’t, however, take away from its importance on an evolutionary level. Surprise facilitates attention-related processes, exploratory behavior, and curiosity in strange situations. It does that by directing your cognitive processes to the situation at hand.

Thus, while we might not talk a lot about surprise, it’s a common part of our lives. In fact, it’s one of the keys to viral marketing. A study by Alberto Dafonte Gómez published in the Revista Científica Iberoamericana de Comunicación y Educación (Iberoamerican Scientific Magazine of Communication and Education) analyzed the most shared videos on social media and found that 76% of the most successful videos use surprise as a marketing tool. Pretty amazing, right?

It’s also an altruistic emotion. It facilitates the emotional reaction and behavior that follows a novel situation. Therefore, it prepares you to move on to another emotion and, as you know, the perfect companion to surprise is happiness.

“The moments of happiness we enjoy take us by surprise. It isn’t that we seize them, but that they seize us.”

Disgust: The Forgotten Emotion
Disgust is a biological adaptation that protects us from rotten or toxic food. But we can also feel disgusted about ideas. Read all about it here! Read more »
Link copied!
Interesting Articles
Culture
15 Strategies for Excellent Team Leadership

There aren't many concepts as hard to understand and assimilate as the concept of excellence. It's a wonderful word, and it "sells" better than almost anything else. But what does it…