Sunday afternoon anxiety manifests because you have to face and finish your weekend obligations. Learn about its effects here! 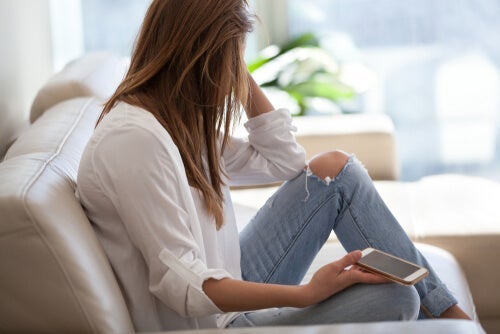 Sunday afternoon anxiety is an internal discomfort that often affects people on Sunday afternoons and evenings. Those who experiment it feel unease, sadness, nostalgia, and even an annoying sense of emptiness. But they can’t quite describe why.

Sunday afternoon marks the transition between the week that’s ending and the one that’s beginning. It means going back to facing daily obligations. It also signals the end of rest and the start of a new cycle. You have to pick up your responsibilities where you left them off and take care of everything you still have left to do.

For some people, Sunday afternoon anxiety is so strong that it causes insomnia. Between Sunday and Monday, they have difficulty sleeping, which increases their unease. They may also suffer from migraines, indigestion, or just general physical discomfort. How does all this happen and how can you confront it? Let’s take a look!

The origins of Sunday afternoon anxiety

Sunday afternoon anxiety is also sometimes called “Sunday syndrome”. It can affect anyone at any age. American psychologist Larina Kase first named the problem in 2006. She began several research studies on it at the Center for the Study of the Treatment of Anxiety at the University of Pennsylvania.

Kase’s studies and other similar ones show that the main cause of Sunday afternoon anxiety is a lack of job satisfaction. Thus, those who suffer from it have unresolved problems in their places of work or in their work-life in general.

Some people simply don’t want to work. They don’t like what they do, which is why they perceive the beginning of the week as torture. Others feel that kind of tension due to work tension. They haven’t managed to find balance or rapport with their co-workers or bosses. And when the week starts, the tension manifests again.

In addition, others doubt themselves and their work abilities. They’re never sure if they’ll finish their assignments on time or not. Also, they don’t feel that they can do what they need to do correctly. Thus, a new week leads to a sense of insecurity and incompetence.

In addition to this, that same discomfort can set in for people who don’t work as well. For them, the first part of the week represents another chapter in that fight to find a new job. Precisely that uncertainty of not knowing if they’ll accomplish what they need to can increase Sunday afternoon anxiety. After the weekend pause, they have to face that harsh reality once again.

Finally, others just don’t get enough rest. Some people have too much work to do. Sometimes, they have to dedicate their rest time to demanding activities, a second job, or to studying or housework. It’s frustrating for them to start a new week because they didn’t get enough rest. Sunday afternoon might just make them feel like they’re on an overly fast ride they can never get off of.

How to deal with anxiety

The real problem here is that, on Sunday afternoons, most people face their realities more crudely than in other moments. They see a line of solitary, frustration, and uncompleted expectations parade in front of their mind’s eyes. That’s why often, without looking for it, they wind up either in deep introspection or evading them all together. And that’s where, at the end of the day, that anxiety manifests.

These recommendations can help you manage Sunday afternoon anxiety:

Despite everything, don’t forget that you won’t solve your anxiety by running away from introspection when you have problems. Sometimes, you need professional help to digest these uncomfortable emotions, and that’s okay. And, sometimes, all you need to do is make a few adjustments or decisions.

Redirecting Your Anxiety and Tensions through Sublimation
Through sublimation you can release your tensions. It's an unparalleled way of redirecting our distress towards something that's healthier for you. Read more »
Link copied!
Interesting Articles
Emotions
Adults Also Have Tantrums

Emotions
Life Is Measured In Emotions, Not Hours

Life is measured in emotions, those moments in which intense psychophysiological reactions bring glimmers of true meaning to our existence.…