Three Signs of Dissatisfaction at Work

In this article, you'll discover three signs of job dissatisfaction, pointed out by a finance professional named Patrick Lencioni. 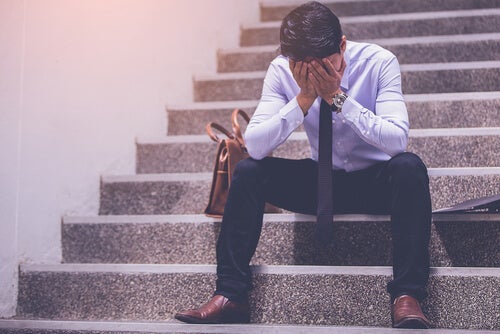 Unfortunately, many working conditions or situations can cause dissatisfaction at work. The problem is that we don’t always act in time to deal with them. It’s a situation that many people experience these days, and they openly say that they don’t feel at all satisfied with their jobs.

According to different studies, this dissatisfaction isn’t limited to a particular social sector. Nor is it always determined by working conditions that would first come to our minds, such as salary or vacation time.

These days, we can find people who feel miserable in all sorts of areas. These can include the service sector, manufacturing, and even at the highest levels of management.

Why signs of job dissatisfaction occur

There are many reasons why these signs of job dissatisfaction appear. The main problem is the lack of personal and professional fulfillment workers feel. As a result, this lowers their productivity and their level of happiness.

If we take a look at the book The Three Signs of a Miserable Job, by writer and speaker Patrick Lencioni, we’ll see that it isn’t just about whether you have a bad job or a good job. In many cases, people think that they have a miserable job, and that actually turns them into miserable people.

Thus, the job in and of itself isn’t bad, but rather how the worker perceives their job. Therefore, job dissatisfaction isn’t determined by salary, the number of hours worked, or other factors that, at first glance, could seem to be the cause. In many cases, the reason for this lack of satisfaction is when the worker doesn’t feel that their job is helping them to achieve self-realization. This is something that’s essential for well-being.

In addition, Lencioni states that this feeling isn’t rational. It’s a feeling of misery that knows no bounds. Even if someone is earning millions, their job could still be a living hell to them.

The three signs of dissatisfaction at work according to Patrick Lencioni

For Patrick Lencioni, there are three basic signs of job dissatisfaction. If these occur, then they can wear us down emotionally and physically. We often have little energy left to try to end the disenchantment that we’re feeling with our job.

The measures the person should take may seem very clear and simple from the outside. However, from the inside, they’re anything but clear.

These people often feel that they’re being ignored. They feel that their efforts aren’t being recognized in their workplace. Thus, if no authority figure appreciates and understands them for their specific qualities and their effort, then the employee can feel as if they’re invisible. They become just one more anonymous worker, a worker who has fallen out of love with their job.

Lencioni highlights another sign of job dissatisfaction: irrelevance. This happens when a person doesn’t know or understand the real relevance of their job.

According to this author, we all need to know that our work is relevant or meaningful in some way. If an employee is unable to perceive the importance of their work, whether on a large or small scale, then job dissatisfaction is very likely to manifest. In fact, one of the most perverse strategies for mobbing (harassment at work) is to ask a worker to fill their workday with totally unproductive tasks.

Let’s look at the third sign of job dissatisfaction mentioned by Lencioni in his book, one which is closely related to the previous one. This occurs whenever an employee can’t objectively assess their contribution to a particular project or task.

It’s important for a worker to be able to measure themselves on their own merits. We’re not just talking about their level of contribution to the company, but also their progress as an individual. This means that when a worker perceives some sort of progress in their performance, it’s much more unlikely that they’ll become disillusioned with their job.

Thus, when the success of a job ends up depending on the subjective opinions or whims of other people, whether or not they’re treating the employee correctly, then it’s difficult for them to feel fulfilled in their role.

Lencioni says that companies should implement tangible means of evaluating the success or failure of the actions that an employee carries out. If not, then motivation can be eroded, and the feeling of a lack of control can grow.

Have you noticed any of these signs of job dissatisfaction? If so, then it may be time to re-think certain aspects of your job or your work performance.

How to Overcome Chronic Dissatisfaction
One of the greatest evils of the 21st century is constant complaints In this article, we'll show you how to overcome chronic dissatisfaction. Read more »
Link copied!
Interesting Articles
Work
Work Overload and Its Consequences

Work overload is common these days as many people devote a lot of their time to it. They do so…

Holacracy is an organizational system characterized by horizontal authority figures and decision-making processes. In other words, it disregards the hierarchical…

Work
I'm Addicted to Work - What Can I Do?

Being addicted to work, also known as workaholism, is a problem that many people face in today's face-paced, stressful world.…