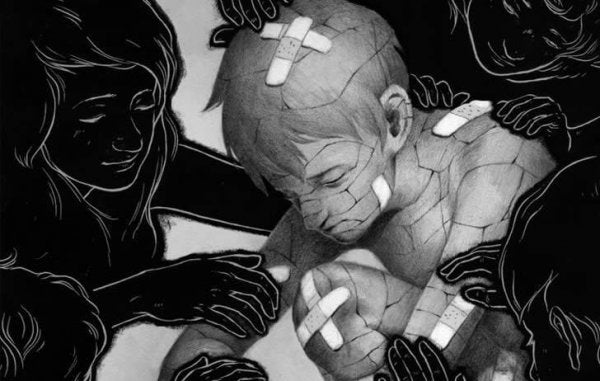 Bullying has unfortunately become an enormous problem in schools. Places where young kids mistreat their insecure classmates who have acne on their faces, or who aren’t the most attractive kids in the class. And this type of mistreatment isn’t always physical.

There are many reasons why kids bully others. Most of them are related to their own terrible insecurity, low self-esteem, or traumatic childhood experiences that might still be happening.

“One out of every ten students indicates having been a victim of bullying.”

This means that there are also different forms of bullying. So now we’re going to look at some of the ones outlined by the National Center Against Bullying. We’ll go into detail for each one so that you can better understand what each consists of.

This is the most visible type, since the bully uses their physical strength to terrorize the victim. With kicks, slaps, and other types of physical aggression, the aggressor attempts to humiliate and suppress the victim.

It’s important to mention that this type of bullying tends to occur in the company of other people, other friends who cheer for the bully and egg them on. In this way, the bully feels powerful, strong, like a leader.

Even if the strongest beatings don’t happen publicly, other “lighter” manifestations of this type of bullying might. Tripping them, pushing them, kicking their desk, stealing their backpack, can all be small warning signs that indicate a possible case of bullying.

This type of bullying is much more frequent, since many people consider verbal mistreatment to be a “kid thing.” But how can it be a kid thing when the person who receives the jokes, insults, and denigrating words winds up suffering and seeing their self-esteem destroyed?

Verbal bullying can be anything from insults to threats to jokes about their sexual orientation, physical features, flaws, tics, or race.

When bullies are asked why they humiliate, insult, and bully their classmates, the answer is usually “I don’t know” or “it was just a joke.”

For adolescents in particular, it hurts a lot to receive these comments, as this is a sensitive stage. That’s why it’s so important to cut the problem at its roots. Many people who are subject to verbal bullying have to struggle a lot to rebuild their self-esteem and believe in themselves again.

This is one of the least well-known, and possibly most frequently used types of bullying. Imagine you want to play in a soccer game, but nobody chooses you or makes excuses, saying all of the positions have been filled by your other classmates.

Or think about seeing your friends commenting on pictures from a party that you weren’t invited to. They’ve explicitly left you out, thrown you out of the group you thought you belonged to.

This is a subtle form of bullying in which you can’t count on the person you have to be in class and do work with. They turn their back on you and exclude you. The emotional pain that this can cause can be very hard to overcome, since rejection is one of most people’s biggest fears.

This type of bullying began because of social media, which is very important among young people, who dare to publicly share their experiences, private feelings, and everything they like and dislike.

Another example of cyber-bullying could be the victim posting a photo and suddenly, a bunch of people start posting negative comments on it, such as “you should lose weight,” or “gross!” This leaves the person who posted the photo feeling exposed and embarrassed.

Up to 37% of minors in Spain suffer from cyber-bullying.

There are also situations where the bully has a photo of the victim looking bad or doing something embarrassing, and threatens them with posting it in order to manipulate them. They do this by sending them private messages that cause them a lot of distress.

You’ve probably never heard of this type of bullying, perhaps because it involves really obscene behavior. This leads a lot of people to deny that there are children and adolescents who do this.

Among the behaviors found under this category are misogynistic, sexist comments that refer to the victim’s body. But in many cases, they also touch the victim inappropriately, without their consent, making them feel humiliated.

“I lied to my mom so I didn’t have to go to school, because I knew they might catch me in the entrance.”

You may have thought that bullying only comes in one form, but the truth is that there are various different types that don’t draw as much attention. Therefore, nobody who works at the school realizes that someone is being mistreated.

There are many schools today that still have to learn how to manage bullying, since they haven’t really been solving it in the best way. A recent news story tells the story of Diego, an 11-year-old who left the following note before committing suicide: “I can’t handle going to school and there’s no other way to stop going.”

Link copied!
Interesting Articles
Psychology
If You Settle For Crumbs, You Will Always Be Weak and Starving

Crumbs allow for survival, to go from one place to another over time. They allow you to keep living, but…