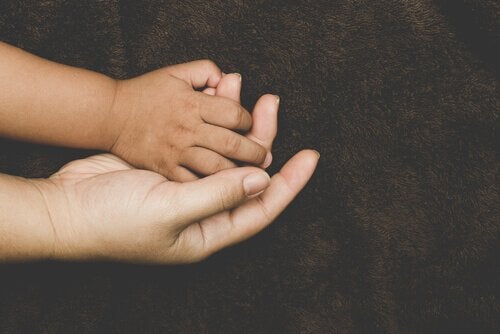 Attachment is the bond that exists between two people that’s characterized by intense emotion. Normally, it’s a lasting relationship with a special and binding component. Mary Ainsworth pioneered the development of the first tool to assess attachment in children. Her procedure is known as Strange Situation.

This mother-child bond doesn’t manifest exclusively in humans. It also manifests in many animals. However, humans require a longer time to form this bond. Attachment is consolidated when unconditionality exists between two people.

The goal of attachment

It’s essential for a child’s first attachments to be healthy. The purpose of attachment, therefore, is to achieve safety, comfort, protection, and the satisfaction of the baby’s basic needs. Thus, depending on the attachment style they develop with their caregivers, children can show more or less proximity, emotional refuge, protest against separation, and a basis of security.

This bond not only influences the child’s immediate well-being, but also marks their psycho-evolutionary development. Therefore, attachment deficiencies can affect them well into adulthood.

For the first attachment to form, the baby must meet a series of minimum conditions. These requirements guarantee that the attachment will develop appropriately:

The Strange Situation procedure is a laboratory process designed by American psychologist Mary Ainsworth in 1960. Its objective is to study the interaction that a mother or an adult (stranger) maintains with the child in an unfamiliar environment. It’s been so popular in the psychology of development that it’s still used today to classify and assess attachment styles.

The Strange Situation procedure tries to simulate certain contexts to analyze how children behave outside of their comfort zone. In other words, how children transition from the safe environment of their home and explore another unknown location. Through observation, the researchers study children’s reactions when they’re separated from their mothers and then when they’re reunited.

This simulation consists of eight episodes meant for children around the age of one. The relationship between baby and caregiver should be clearly established around this time.

With this, the psychologist evaluated the reactions and interactions that occurred between the attachment figure, the child, and the stranger.

A child’s attachment doesn’t fully determine their personality or the quality of their adult relationships. However, it can influence these factors and the interactions established at later stages of development.

Insecure Attachment – The 3 Different Types
There are many people who are only capable of forming insecure attachments. In basic terms, insecure attachment is a relationship style where the bond is contaminated by fear. This is expressed mainly as reluctance in the relationship and other mixed emotions, such as dependence and rejection. Read more »
Link copied!
Interesting Articles
Psychology
Tell Me What I'd Do, Not What You'd Do

Loneliness is a good thing when you are overwhelmed. It is bad when you finally want to talk and your…

Surely you have run into people who, after having a discussion, don't recognize their mistakes. They often say that famous…

Psychology
What Is Mindfulness? Focused Attention in Our Busy World

Being mindful of what is happening in the here and now isn't an easy task. After all, we live in…