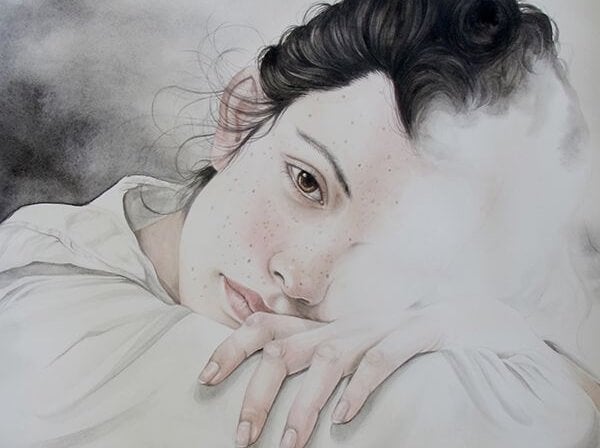 Affective inhibition can be defined, at first, as difficulty identifying and expressing one’s emotions and feelings. Some schools of psychology define this condition as “alexithymia”. This term has three Greek roots: “a” (without), “lexis” (word), and “thymos” (affection). It means “without words for affection”.

Many people who suffer from affective inhibition do experience emotions and feelings. The problem is that it is very hard for them to pinpoint them and, therefore, express them. Not everyone who has this condition experiences it to the same degree or with the same intensity. In some cases, this phenomenon is not very profound, while in others there is a complete dissociation with the affective world.

“Only two types of people can speak free of inhibitions: strangers and lovers. Everyone else is only negotiating.”
-Anonymous-

A person with alexithymia has difficulty knowing whether what they feel for someone is love or friendship. It would be very rude for you to ask them how they are doing or feeling. They will tell you they’re doing “good” or “bad”, but that doesn’t actually mean they are “good” or “bad”. They will not say they are “angry”, “excited”, or “sad”. In extreme cases, faced with the question, they simply remain silent or just say they’re “fine” automatically because they understand that this is the answer others usually expect.

The most prominent feature of affective inhibition is coldness. It’s as if these people don´t feel and, indeed, in the most extreme cases, these people really can’t feel at all. Their symptoms are similar to those who suffer from depression, but are even more acute. The most notable symptoms are:

There are two types of affective inhibition or “alexithymia”. One is the primary form, in which the individual behaves this way from the moment they are born. In this case, it corresponds with a neurological anomaly. The other kind is secondary alexithymia, which appears after physical or psychological trauma, or after prolonged periods of intense stress.

For many researchers, the majority of cases of affective inhibition are determined by sociocultural factors. There are common models of communication which induce these individuals to inhibit the expression of their emotions. There are also certain social environments in which saying what you feel is frowned upon. Often a model of “good and bad emotions” is imposed. People can talk about the “good” ones, but not about the “bad” ones.

The inconveniences of not expressing affection

The most severe cases of affective inhibition require therapy, which usually needs to be extended over a long period of time. It’s possible that these individuals will also require a neurological intervention. Everything seems to indicate that the root of the problem resides in a disconnection between the two cerebral hemispheres. This can eventually be corrected, but there are times when it is impossible.

In cases that are less severe, which is the great majority, these people can follow a different recovery plan. Sometimes an individual inhibits the expression of their affection simply because they haven’t learned how to express feelings. It’s very common for them to have been forced in the past to hide their affection, since in certain environments a lack of emotional expression is valued positively. It is considered a sign of self-control. Likewise, sometimes emotional silence is the “natural” response to unresolved trauma.

The truth is that the impossibility of defining and expressing emotions brings about serious consequences. In the first place, the intellectual functions decay. Emotions play a fundamental role mainly in the acquisition of new knowledge and in memory. Also, the affective world is the foundation of our investigative capacities and creativity. Therefore, a person with affective inhibition is intellectually weak.

On the other hand, obviously one’s social life will be reduced to a minimum. There is no possibility of establishing deep bonds with others. Life becomes arid and this, in turn, induces more inhibition. It is a dysfunction that is completely treatable. Affection and emotions are “the salt of life”. If you suspect that you or someone you know has these symptoms, don’t hesitate to seek help.

Learn the Best Exercises and Activities to Work Through Your Emotions
Unlike I.Q., which stays just about the same our whole lives, we can grow our emotional intelligence over time. Art therapy is an excellent strategy. Read more »
Link copied!
Interesting Articles
Psychology
Life Changes When You Change a Thought

Intuition and instinct aren't the same things. While the latter guides the behavior that helps you survive, the former describes a…

Imagine that your stroking a cat, and therefore also perceiving the taste of candy in your mouth. Or that as…