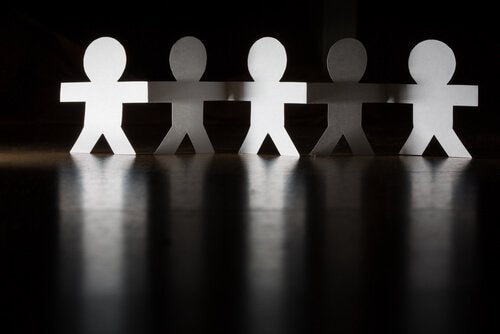 This model is based on the fact that personality can be divided into five independent traits. These traits include openness to experience, conscientiousness, extraversion, agreeableness, and neuroticism. Knowing how each one manifests in an individual allows us to understand their personality.

To understand the Big Five model better, we must consider two aspects. First, we must know what each personality trait means. Second, we need to analyze why it’s been criticized.

This factor evaluates an individual’s disposition in personal interactions. It refers to a person’s level of activity and stimulation when they relate to others. It’s also intimately related to the degree of pleasure or enjoyment acquired through social relationships.

An individual with high extraversion is sociable, talkative, people-oriented, optimistic, fun-loving, and affectionate. On the other hand, low extraversion means a person is reserved, sober, quiet, or withdrawn.

This factor helps us understand how we relate to other people. Agreeableness manifests along a continuum, which ranges from compassion to antagonism in thoughts, feelings, and behaviors. In other words, it has to do with the extent to which an individual is able (or not able) to put themselves in another person’s shoes and act according to their emotions and concerns.

If an individual has high agreeableness levels, they come across as compassionate, affable, confident, attentive, and not spiteful. On the other hand, people with low agreeableness tend to be cynical, rude, suspicious, competitive, vindictive, ruthless, irritable, or manipulative.

This trait evaluates the extent to which an individual actively searches for new experiences and enjoys different activities. Basically, it measures tolerance and the exploration of unfamiliar situations.

People with high openness to experience levels are curious, creative, original, imaginative, non-traditional, and have many interests. In contrast, people who score low in this trait are conventional, pragmatic, realistic, or have few interests.

This trait evaluates a person’s organization, persistence, motivation, and goal-oriented behavior. It shows the difference between people who care about their performance and people who don’t.

If you score high in conscientiousness, you’re organized, hard-working, punctual, orderly, ambitious, or persevering. But those who have low scores seem informal, lazy, careless, and undisciplined.

The first flaw involves self-reporting. Self-reporting is a type of test in which the subject gives answers explicitly. Therefore, this makes it easy to lie and respond according to social desirability.

Another possible flaw is the existence of biases when the subject is judging themselves. From social psychology studies, we know that we tend to be biased when we evaluate ourselves. Thus, in the Big Five model, the responses aren’t very objective.

However, and despite its flaws, this model may be useful in stable contexts when its limitations are taken into account. In addition, it may even have other uses, such as measuring a person’s self-concept. After all, it’s a very interesting model with statistical data that guarantees its reliability.

What Is Your Personality?
Read more »
Link copied!
Interesting Articles
Psychology
What is Musical Intelligence? How Can I Improve It?

Psychology
Helping Cancer Patients: "The Heroes of our Time"

Cancer knocks at our door when no on expects it. The disease enters the scene everyday. It is the face of…

"The human heart is an instrument of many strings; the perfect connoisseur of men that knows how to make all of…