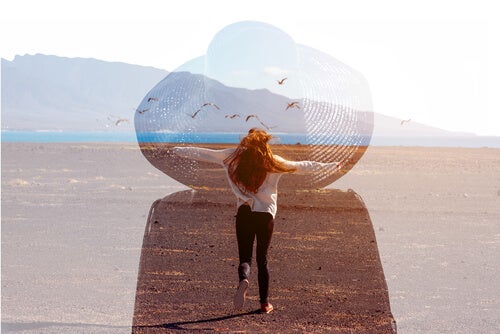 Imagination opens the door to fantasy, but it also distances us from reality and takes us out of the present moment. The creator of Gestalt therapy, Fritz Perls, talks about how this therapy invites us to live in the present. We can do this by getting rid of our assumptions about the future.

Only with our feet on the ground will we be able to connect to the present. Other things, however important their consequences may be, are not happening right now.

Gestalt therapy falls within humanistic psychology, which sees the human being as a global being. One that has a mind, emotions, and body that together form a whole. This type of therapy helps people take responsibility for what happens to them and encourages their personal growth. It is psychotherapy that goes beyond the clinic and into real life.

“Gestalt therapy is distinguished more by what it avoids doing than by what it does. It argues that it is enough to be conscious; that for a change to take place, nothing is needed other than presence, to be conscious and responsible.”

This style of psychotherapy was created in the 50’s by Fritz Perls, psychiatrist and doctor. He combined his approach with that of his wife, psychologist Laura Perls. It included the principles from Gestalt psychology, with concepts such as figure and background, to create a specific therapy.

Gestalt therapy puts great emphasis on the conception of the individual as a whole. According to Perls, man naturally tends to complete his existence, although the gestalt (in German, shape or form) may remain incomplete and repeat past problems without letting new ones surface.

Some of the influences that fed into Gestalt therapy were: psychoanalysis, with its study of defense mechanisms; eastern religions such as Buddhism; existential philosophy; phenomenology; theater; and psychodrama, among many others. Authors such as Paul Goodman and Isadore From also contributed. They have focused on going beyond therapy and extending it to different social and personal spheres.

What is Gestalt Therapy?

Gestalt therapy is an approach that focuses on the potential of each person. It sees the individual with his own resources and ability to self-regulate. It is a therapeutic approach that focuses more on progress than on content. The therapist usually won’t ask “why?” and instead will ask “how?” The idea is to understand the process and not necessarily the causes of the behavior.

Gestalt theory puts much emphasis on subjective physical sensations and emotions, trying to help unlock the issues the client is working through. This approach shares a lot with mindfulness practices, since it asks people to accept what is happening instead of trying to push against it.

In addition, one of the fundamental concepts is realization or “awareness.” That is, the awareness of the present moment. It puts spontaneity ahead of control. Living what one is going through instead of avoiding and resisting. For example, if you feel an emotion, Gestalt Therapy may encourage you to express it rather than holding it in.

The basic concepts of Gestalt Therapy

The main objective of Gestalt Therapy is to help people to support themselves better and be more aware of the responsibility they have for their own psychological wellbeing. Certain important concepts are used to that end. They are:

Awareness is a fundamental step. The individual needs to see how they think, feel, and act in specific circumstances. When these three axes are not aligned, there is significant discomfort. Circumstances can be changed in the present only if there is awareness.

The “here and now”

In Gestalt Therapy, the present is understood as the only possible scenario, since it is lived as a “whole.” Therefore, if a therapist and client work on something in the past, they approach it as if it were happening in the present.

For example, if a person was bullied in the past, the therapist will ask them to explain the experience as if it were happening right now. By doing this, the therapist gives them the opportunity to recall past emotions and work on them in the here and now.

The therapist invites the client to take responsibility for their behavior, their thoughts, and their emotions, even if they are negative. Taking responsibility gives more freedom and autonomy. This way they are better able to accept their mistakes and learn from them. One example that is used a lot is making the person speak in the first person and own their words.

What is the role of a Gestalt therapist?

A Gestalt psychotherapist walks alongside the person or client (they don’t usually use the word patient because they see the person as an active participant). They facilitate the growing process. In this approach, the therapeutic relationship is horizontal, meaning the therapist knows no more than the client.

The psychotherapist just facilitates. She does not give advice, but helps the person find the skills he needs to manage himself and become stronger. Thus, the person is the “expert” of his own life, and it’s no one else’s place to tell him what to do. So responsibility is given back to the client and personal autonomy is respected.

In short, the goal of Gestalt Therapy is to facilitate a process where the client can take responsibility for their emotions and accept the cost of living in congruence with them. Honesty, openness, and the present are fundamental values in Gestalt Therapy.

Say Goodbye to Your Anxiety With Mindfulness
Human beings have the ability of experiencing a different type of fear than animals, psychological fear. Mindfulness can help you overcome this anxiety. Read more »
Link copied!
Interesting Articles
Psychology
When Stress Becomes Pathological

The accelerated rhythm of the life we live produces a lot of stress. Every day, more people suffer from the stress…

The limitations and chains you encounter along your way are very often self-imposed. The frustration this makes you feel and the fact…

Depression is one of today's serious problems. We live in a world so inundated with technology that everything, good and bad,…

Who isn't familiar with the fear of rejection? This fear is probably with most of us every day, but we aren't even…