Stephen Hawking: The Man of The Stars 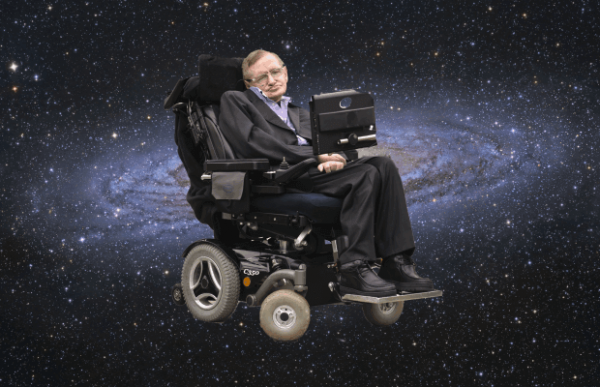 Stephen Hawking is perhaps the most famous living scientist of our time. His prestige is probably only comparable to that of Albert Einstein in his time. His fame is primarily due to his input on the origin of the universe and the laws of physics involved in this process.

However, his reputation is also due to his courage in the face of struggling with a genetic  disease. This condition has not prevented him from leading a full life.

One of his best-known books is The History of Time, which became a best seller in a short period of time and has sold over ten million copies. He later moved to films. Hawking is admirable not only for his intellectual achievements, but for having done it in the midst of many difficulties. No doubt his magnetism is the result of his vulnerability, his courage and his brilliance.

He born in January 1942 in London. Exactly three hundred years after the death of Galileo, an fact that Hawking often jokes about. He belongs to an “eccentric” family, according to the youngest of his siblings, Edward. His father worked as a doctor and spent most of his time in Africa, dedicated to research.

Hawking was just a teenager when he decided to study mathematics and physics. He enrolled at Oxford at the age of 17 years. He was popular among his peers for his intelligence and had a reputation for not devoting much time to studying. Instead, he played bridge and practiced boat racing with friends.

After several years of being unfocused and without showing a special dedication to his studies, his grades were good. The school Hawking chose was Cambridge. This required an outstanding average. He expressed his sincerity at the time of his interview by saying, “If I get excellent grades I’ll go to Cambridge. If I get okay grades I’ll stay at Oxford. I trust that you’ll give me excellent grades.” And that’s how it was.

As a scientist, his career began more than 25 years ago, precisely at the University of Cambridge. Perhaps he is the scientist who has done the most in bringing us closer to understanding the universe. His theoretical work about black holes, and advances in knowledge about the origin and nature of the universe are avant-garde and certainly revolutionary.

At twenty years old, Hawking was diagnosed with a degenerative disease known as “motor neuron disease” or ALS. This illness has confined him to a wheelchair for most of his life. Hawking did not allow the disease to be an obstacle for him in his scientific development. In fact, his illness has liberated him from routine tasks in order to devote his time to research.

Hawking shies away from talking about his physical disabilities and avoids talking about his personal life. He wants to be remembered above anything else as a scientist, as a writer and popularizer of science and as a person like any other, with dreams, impulses, desires and ambitions just like any one else who can walk.

When Hawking was diagnosed with the disease, he was told that it was more common in older people. However, he was only twenty years old. In any event, the illness quickly advanced and the doctors did not give him more than two years to live. The man of the stars then plunged into a deep depression and listened to Wagner all the time.

After two years, things stabilized for Hawking in terms of health. He decided to marry Jane Wilde, with whom he had three children. Hawking continued with his research, overcoming even the devastating physical deterioration that had generated his illness. In 1969, he was finally relegated to a wheelchair. This situation made him completely dependent on a third person.

A man who overcomes himself

In 1979, he was elected to assume the Lucasian chair of mathematics at the University of Cambridge. This chair had been assumed by Isaac Newton in his time. He later underwent an emergency tracheotomy in 1985 and completely lost the ability to speak. His only communication channel is reduced to a voice synthesizer adapted to his wheelchair.

Hawking tells, with a good sense of humor, an anecdote that happened to him at the Vatican. At the end of a congress of cosmology performed there, the speakers had an audience with the Pope. He expressed interest in studying the Big Bang Thoery and the subsequent evolution of the universe, saying it was creation and work of God.

Hawking says he felt joy because the Pope had not understood the speech he had made about “the possibility that space-time was finite but had no class of boundaries.” In other words, he says that the universe had no beginning and that there was no moment of creation. So he was glad that the Pope had not understood and said ” that he did not want to share the fate of Galileo”.

37 Phrases That Will Inspire You

Let’s rescue the trunk some of the phrases that have most inspired from history, both heroes and villains, to … More »

Illness and guilt is a bad combination that affects a lot of people. When some people face health problems, they…

In order for the brain to function as best it can, it's necessary to feed it the nutrients it needs.…

Culture
The Legend About Lies and Truth

Our view on lies and truth is really vague. As a general rule, we all prefer the truth. However, when…

Culture
Zero Contact: Deciding to Definitively Leave a Relationship Behind