Solomon Asch: One of the Pioneers of Social Psychology 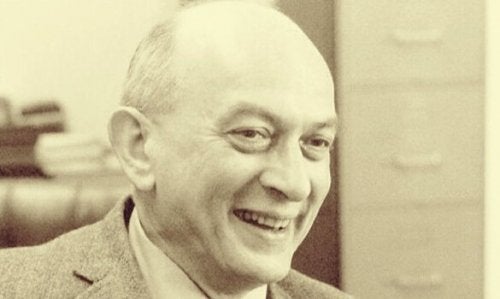 Many experts consider Solomon Asch one of the pioneers of social psychology. In this article, we talk about his life and contributions.

He was born in Warsaw, Poland in 1907. When he was 13, his family moved to New York. There, Solomon Asch completed his studies and obtained his doctoral degree in 1932. Over time, he achieved recognition for his original social psychology experiments. In particular, he tried to demonstrate the influence that others can have on a person’s behavior.

While he was studying at Columbia University, Solomon Asch was Max Wertheimer‘s student. This Gestalt psychology expert really impacted him. Namely, he helped him become interested in the phenomena of perception, thoughts, and association.

“Most social acts have to be understood in their setting, and lose meaning if isolated. No error in thinking about social facts is more serious than the failure to see their place and function.”

Asch worked as a psychology professor at Swarthmore College for 19 years. During his time at the institution, he established a strong relationship with Wolfgang Kohler, whom he always admired. In particular, his theories aroused his interest in research. Furthermore, they served as the foundations for his experiments. Asch became very famous due to his experiments and his 1952 book Social Psychology.

He revolutionized the studies of the human mind. Likewise, he also worked at the Massachusetts Institute of Technology (MIT) and the University of Pennsylvania. Furthermore, he also had a brief stint at Harvard University, where he directed the Ph.D. thesis of the famous and controversial Stanley Milgram.

In 1951, Solomon Asch conducted a series of experiments that are known as the Asch conformity experiments. Specifically, their main purpose was to prove that people yielded to a group.

One of his experiments consisted of forming a group of seven to nine students. All of them, except one, were accomplices of the researcher. The researchers presented the students two lines. Then, they asked the students to point out which line was longer. The correct answer was very obvious. However, the accomplices began to choose the wrong option. This put immense pressure on the non-accomplice subject. Consequently, the subject went along with the group, deciding against what logic was telling them.

Solomon Asch showed that many of the experiment subjects ended up agreeing with the majority’s responses, even though they were obviously wrong. This made Asch wonder if the subjects who gave ‘mob mentality’ answers were doing so because they were really convinced of their answers. The answer to this question was no. He discovered that the number of people who yielded to the majority’s answer decreased considerably when they were allowed to express their decision in private. Thus, the influence acted on the individual’s conscience and not on their judgment.

Other aspects of the Asch conformity experiments

To complement the main experiment, Solomon Asch introduced some variations. One of them was that he introduced a subject (also an accomplice) that broke a majority’s consensus. Asch found that the presence of that person who disagreed with the consensus drastically reduced the number of experimental subjects who yielded or conformed to the majority’s wrong opinion.

Asch’s experiments, although criticized, provided a different and original perspective of how a group can influence and condition us. In fact, many consider him one of the most important psychologists in history.

The Little Albert Experiment
John B. Watson is known as one of the fathers of behaviorism. In the Little Albert experiment, he manipulated a baby to prove his hypothesis. Read on! Read more »
Link copied!
Interesting Articles
Psychology
You Know Me Well But I Won't Tell You Who I Am Until The End

You know me very well. I'm here for you, I only have one chance to get you back, and I"ll…