Social Networks Could Be the End of Your Relationship 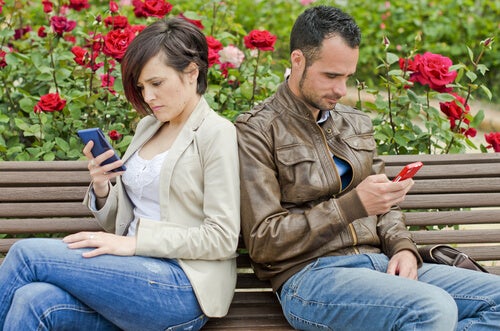 Gustavo Cerati once said that “seduction is almost never where you think” it will be. It seems like a similar effect occurs with social networks, which are not only tools of contact, but also of disconnection and the end of relationships.

Is it possible that social networks have become weapons of mass destruction in terms of relationships? According to different studies, it appears as though they have caused millions of divorces. This is not an exaggeration.

Let’s not forget that while we interact through social networks, we also make a large part of our lives public. Facebook and Twitter feeds showcase the private worlds of millions of people.

In addition, social networks have become a powerful way to communicate with people. In Spain alone, there are more than 20 million Facebook users, which is almost half of the population. This is frightening if you think about the entire world. The number of users exceeds 1.5 billion people. It’s easy to see the power that social networks have over our lives. For many people, they have become indispensable.

Although many studies analyze the impact of social networks on our lives, we’re going to focus on one in particular, performed by a prestigious North American journal of psychology.

According to recent data, Facebook has been the cause of around 28 million divorces around the world. This might seem exaggerated, but just a few years ago, the American Academy of Matrimonial Lawyers confirmed these figures when it established that Facebook was behind 20% of separations in the United States.

So far we’ve focused on Facebook, since it’s the most important social network in the world today. But remember that there are many more: Twitter, Instagram, Google+, Pinterest, etc. Some users have even used these to end their romantic relationships.

Why do social networks trigger divorce?

If your relationship is rock solid and you have a sensible attitude towards social networks, nothing is going happen. This data isn’t necessarily reason for alarm. However, there are certain factors that influence the relationship between social networks and divorce.

Apparently, couples who have reached a dead end in their relationship, who haven’t taken care of it, or who are simply unhappy for whatever reason, find in social networks a new way to meet people and enter into friendships that can turn into something more. But there are also more reasons:

It’s clear that social networks have changed our way of seeing the world, which includes romantic relationships. If they’re not treated with common sense and reason, they can provoke insecurity, fear, or sadness. So take care of the person you have by your side, and remember that social networks are mere entertainment, not a way of life.

The Importance of Good Communication

Every now and then, the world gifts a new great mind to us. Some of them are leaders in fields…

I am sure that you have at some point felt curious to know your level of intelligence. The most recent…

Culture
We're Too Young to Be So Sad

The marked, negative changes in society and the economy are affecting the young generation and making them sad. Everyone is affected by broader social and economic trends, but it can be difficult…

Culture
The Bizarre Days of the Black Death

One day, a contaminated cargo arrived in a port city of 100.000 inhabitants and of big commercial importance. In less…