Seven Keys to Teaching Your Children How to Share

Sharing isn't a natural skill, so children must learn to do it. But you must teach your children how to share by setting the example and showing them that there are positive consequences for them when they do it. 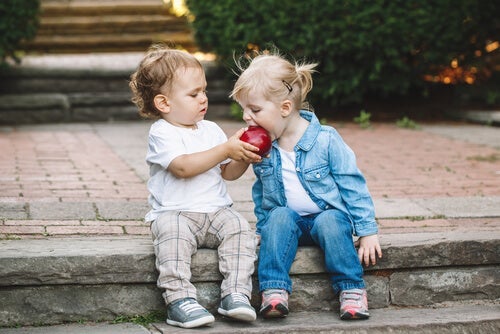 It’s normal for young children to refuse to share and it’s also normal for them to feel that everything they want belongs to them, even when it doesn’t. Even young children defend their things through violent and defensive attitudes. Despite this, you must teach your children how to share by showing them there are many rewards to doing so.

This is because sharing isn’t natural; it’s a learned skill. But it isn’t easy for young children to understand what it means to give and receive, especially since they lack a clear understanding of time and language. For example, telling a two-year-old that they’ll get back their toys in a few minutes means nothing to them.

Young children are in an egocentric stage of development and only recognize themselves as individuals who have things. They’re beginning to explore what it means to own something and don’t grasp the idea that some things belong to other people.

The good news is that, even though this isn’t easy to achieve, children can learn to share. However, it requires patience and proper training from their parents and educators.

Children generally understand the concept of sharing around the age of three. But it’ll be a while before the child is ready to do so. Even though the child is developing empathy and can wait for their turn, they aren’t mature enough to resist all of their impulses. Most three and four-year-olds will put their most immediate interests first.

A young child may not understand enough to realize that, even if they don’t have a toy now, they will soon. Despite the outbursts that may occur, their sharing skills are maturing below the surface.

Here are some keys to teaching your children how to share and help them develop those skills.

If you want your young child to learn to share, you must set the example by being a good role model. You can do so by sharing something to eat or letting them help you with something you’re doing. It’s also good for them to watch you sharing things with other people and saying “please” and “thank you”.

2. Don’t forget that their things mean the world to them

Children’s things are their world. If you force them to give them up, you’ll only negatively reinforce their obsession with keeping them safe. The child must learn that sharing doesn’t mean they’re losing or giving them up. This way, they’ll see that sharing with other children just makes games a lot more enjoyable.

3. Monitor how they use what others share with them

Point out when other children share something. This way, your child can see what happens when others share and then retrieve their belongings. If the toy is for team play, they can play for a while and then give it back when they’re done. Thus, the child can see there’s no danger and that sharing is actually fun.

4. Try to understand why your child doesn’t want to share and teach them how to do it

Your child may not want to share something because it has a special meaning for them or because they fear that others might spoil it. They may even have a reason to think so, even if they don’t know how to express it. Perhaps because the other child already did it.

Offer positive reinforcement when your child has a positive attitude and shares. Acknowledge it and congratulate or reward them with something they like.

7. Teach your children how to share and show them that doing so is more than the mere exchange of objects

In addition to exchanging and sharing objects, you can also share your time by telling them a story or simply by giving them your attention. Add the word “sharing” to your vocabulary whenever appropriate to the circumstance. This is because it’s very useful for a child to integrate it into their daily actions.

It’s important to teach your children how to share

Learning to share can be a challenge for young children. But it’s a challenge they must confront and overcome. It’s an important ability they need to be able to play nicely with others and to benefit from their interactions with other children.

Unfortunately, not all children learn this skill. Surely you know co-workers, friends, and relatives who, even as adults, haven’t yet acquired sharing skills. These adults are rather difficult to deal with. The bad news here is that it’s almost impossible to acquire this skill as an adult. This is why it’s very important to acquire sharing skills during childhood. Thus, don’t underestimate the importance of teaching your children to share.

How to Teach Children Gratitude
To teach children gratitude is about more than saying "thank you". Helping them live with a grateful spirit is something else entirely. Read more »
Link copied!
Interesting Articles
Educational Psychology
What's Positive Reinforcement and How to Use It?

How can we ensure that someone repeats certain behavior patterns? How do we increase their frequency of occurrence? It's all…

Educational Psychology
Flipped Classroom - What Exactly Is It?

A flipped classroom is a pedagogical model that transfers the work of certain learning processes outside a classroom. Meanwhile, teachers…