After reading these Terence quotes, you may feel that he wrote them yesterday, even though they're more than 20 centuries old. However, their wit and universality are timeless, meaning that their vitality and validity remain intact. 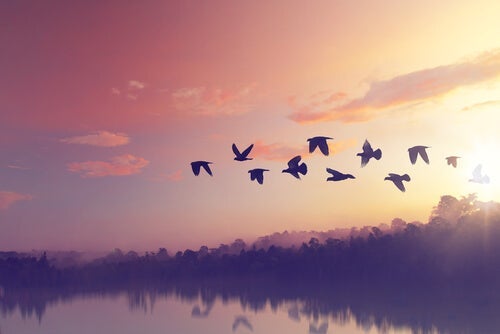 These Terence quotes were written in the context of ancient Rome but their content and scope remain as good as new. Publius Terentius Afer mainly wrote comedies. There isn’t a lot of information about his life but the six works he wrote are perfectly preserved in their entirety.

These interesting Terence quotes came precisely from these six works, and people continue to quote them to this day. It’s amazing how his writings survived the passing of time. Most of the works of his contemporaries didn’t have the same fate.

It’s also remarkable that Terence was a mere slave. In fact, he bears the name of the person whom he served as a slave. The same one who appreciated his qualities and granted his freedom. It allowed him to dedicate himself to writing. Now, more than 21 centuries later, people are still talking about him. These are some of Terence’s most popular quotes.

1. Nothing is alien to you

“I am human, and I think nothing human is alien to me.”

This is one of Terence’s most beautiful and profound quotes. There are several translations from Latin, but the essential meaning is present in all of them. It’s about the essence that’s common in all human beings.

By saying that nothing human is alien to you, he states that every human being can accomplish anything. Both positively and negatively, every human has the same potential.

2. One of the Terence quotes on truth and hate

There’s a hint of bitterness in this statement but it’s overwhelmingly realistic. Much more if you take into account that Terence lived in the imperial era of Rome. Convenience and treason were the norms in that environment.

Pleasing others gets you a lot of “friends”. Thus, you obtain the goodwill of others, even if it’s only superficial. Instead, many people can’t tolerate the truth. Thus, it usually produces animosity and rejection.

“It isn’t good to grab a wolf by its ears because you don’t know whether to release it or retain it.”

This is one of Terence’s quotes that reveals his comedic side. It’s sarcastic and one can apply it to all kinds of phenomena that occur within the framework of power. Thus, it’s a metaphor that tells you about the problems that certain relationships can cause you if you don’t know how to handle them.

The wolf caught by its ears is a representation of having partial control over an attacker or an attack. In that case, the one who gets caught is the one who grabbed the other by its ears because it can’t let it go but it doesn’t want to be around it either.

“I hold this as a rule of life: too much of anything is bad.”

This quote derives from the Stoics and is a declaration of moderation as the maximum virtue of life. Any excess is harmful, regardless of what it is.

The Stoics rejected nothing, especially pleasure. However, they did emphasize that excess always led to pain and damage. Thus, they simply advocated balance and moderation.

“Fortune is always conducive to strength.”

There are many versions of this quote. In it, Terence talks about what humans commonly refer to as “luck” and how it always seems to be on the side of the strongest.

This is because luck has nothing to do with chance. It’s the spiritual strength of logical chains that lead to circumstances that favor strong people, although they appear to be adverse at first.

“You can’t do anything great and memorable without taking a risk.”

This is a call not to stop experiencing fear but to confront the situations you’re afraid of. Staying in a safe place and not taking risks only leads to mediocrity.

Therefore, Terence points out that you must take risks if you’re looking for something memorable. It also means being prepared to lose, or not to achieve something, at least in the first instance.

“Whoever believes that they establish a most lasting authority by force rather than by a friendly pact is deeply mistaken.”

There’s a clear pacifist declaration in this Terence quote. You can’t impose authority by force because, if you do, it’ll surely be weak and fleeting.

Similarly, pacts are very powerful. They involve agreement, so their effects last longer. A friendly pact considers the interests and needs of all involved and gives it solidity.

Terence was a dedicated intellectual and keen writer. He was very popular, both during ancient times and the Middle Ages. Many generations enjoyed, and continue to enjoy, his writings and lessons.

5 Historical Novels that Will Broaden Your Horizons
Historical novels are capable of transporting us to another time and place. A good historical novel shows past realities. Read more »
Link copied!
Interesting Articles
Sayings
Honoré de Balzac and His Best Quotes