People who have an intense craving for love often lacked affection in childhood. If this goes untreated, it could lead to many heartbreaks. 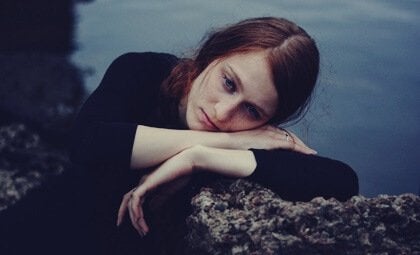 People who crave love often do so because they grew up without affection or emotional intimacy. We’re talking about people who need to be held in someone’s arms and hear loving words or have simply never felt affection from those around them.

People who grow up with a lack of affection go through life waiting for the wound to heal. The issue is that they think they need others to heal. But only self-acceptance and self-love can truly help them heal.

People who crave love often create situations that actually just increase the emptiness they feel inside. This is a complex psychological issue that requires psychological help.

Here are seven characteristics of people who feel this urgent need for love.

The seven characteristics of people who crave love

People who crave love put a huge importance on affection. They may even think nothing else matters. Thus, a kind of fire lights up inside them when someone else shows them affection.

They have a really hard time letting affection come and go naturally. The mere thought of receiving it makes them anxious. They feel both excited and terrified by it and they often become obsessed with it.

2. They try to control people

It’s also common for people who crave love to become possessive and controlling with people who show them affection. They’re not necessarily trying to control the other person’s life. They do this just because they want to avoid their own pain.

These people tend to have an unconscious belief that if they keep this person in sight, they’ll never lose them. The fear of abandonment and betrayal (a product of their emotional wound) makes them crave control. But this often leads to a falling out or a breakup.

People who haven’t received genuine love have trouble believing in it later in life. So, they demand constant displays of affection. They can become very demanding with partners or anyone they have an emotional bond with.

For example, they might say things like: “I needed you to be there, but you weren’t” or “I was hoping you would do something special, but you didn’t”. They consider love something absolute and unconditional. But not even a mother can give you that.

4. They beg for affection

People who crave love are demanding but also tend to let too many things slide. To them, anything is better than losing the person they love. Consequently, they often ignore their own needs and well-being.

If they think the other person is becoming distant, they’ll do just about anything not to lose them. They feel worthless and think that the other person’s love gives their life value. This means they’ll even put up with abuse if they have to.

5. They make too many sacrifices

These people also make love out to be much more dramatic and painful than it needs to be. They feel so thankful someone loves them that they’ll make all kinds of sacrifices to please them.

Love does mean having to make sacrifices at times, we aren’t denying that. But these people take it to the extreme. They act like the other person is the only one with rights and privileges, like they’re the only ones who have to give.

6. They don’t trust the other person

No matter how hard they try, people who crave love can’t bring themselves to trust others. They’re constantly suspicious, and that gradually weakens their bonds. They’re always expecting to be abandoned or hurt, so that’s what they see.

Their mistrust is so intense that they can even start seeing good things as bad or vice versa. They look for ulterior motives, hidden agendas, and conspiracies everywhere. It’s all part of their massive fear of being hurt.

7. They accept the unacceptable

Abuse, in any of its forms, is unacceptable. Unfortunately, lack of affection often pushes people into a cycle where they’ll accept that kind of behavior from people they have an emotional bond with.

They can’t tell the difference between a disagreement or conflict and an abusive situation. They might get angry over nothing but also accept physical and mental attacks.

It’s a very paradoxical situation. People who crave love seek it from others to try to fill the gap inside them. But because they lack self-love, they run into heartbreak after heartbreak. That’s why professional help is so important in these cases.

Sacrificing For Love: An Exhausting Behavior
When it comes to love, you shouldn't sacrifice everything, because sacrificing for love doesn't mean total selflessness or forgetting your values. Read more »

Have you ever found yourself doing something you didn't want to do only to please someone else? There are some…

The psychoactive substance we know as ecstasy is a synthetic drug. That means that it is made in a lab via chemical synthesis. People usually produce drugs this way to…