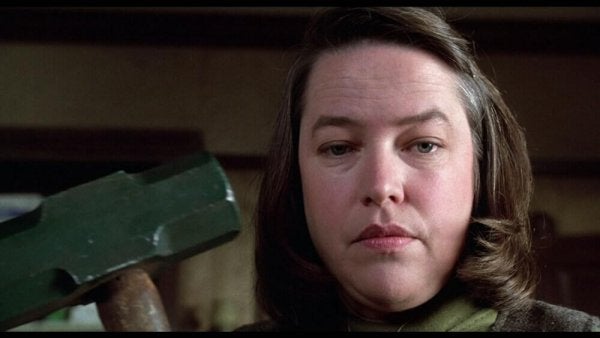 If we review Kathy Bates’ films, we encounter titles as famous as Titanic or Fried Green Tomatoes. However, the American actress’ biggest success is Misery. Bates won the Academy Award for Best Actress for her brilliant portrayal of the psychopathic Annie Wilkes.

Who is Annie Wilkes?

What makes Annie Wilkes so special? Oftentimes, villains intrigue, disturb, and fascinate us. They usually attract public interest and also experience rejection. But Annie Wilkes’ appeal is unlike what we often see in most villains. It seems so real, so true, so terrifying. Who would expect that a retired nurse who has been head of a maternity ward is actually evil?

Annie Wilkes is a character with a complex, aggressive, obsessive, and bipolar personality. However, what she projects to the outside world is different. The movie Misery (1990), directed by Rob Reiner, is based on Stephen King’s novel of the same title. The novel delved on the character’s past and mentioned some facts omitted in the film version.

However, Kathy Bates’ portrayal is so sublime that she acted the perfect image of this villain. It awakens public interest and keeps us in constant agony as if we could feel the tortures suffered by well-loved writer Paul Sheldon. Bates’ acting received a lot of good reviews from both the public and film critics. Besides being the first woman to receive the Academy Award for Best Actress in a thriller, Bates’ portrayal has been one of the best female performances of all time.

We suggest that you watch the movie Misery or read King’s novel before reading this article. This is because we’ll delve deep into the disturbed Annie Wilkes. Paul Sheldon, the famous writer of the novel Misery had an accident in the middle of a blizzard. Annie Wilkes, his self-proclaimed number 1 fan, rescued him. In a dreary place, a suffocating and atrocious real horror story begins.

Wilkes is a heavy-built, serious, middle-aged woman. She has a very simple appearance. We could easily say that she’s a conservative woman due to her appearance: she wears no make-up, has a simple hairstyle, and the only thing that’s striking about her clothing is a small gold cross hanging from her neck. This cross is a common symbol that we’ve seen countless times and may give us a clue on Wilkes’ personality.

However, that little symbol associated with Catholicism and, therefore, with the values of religion contrasts with Annie’s real personality. She seems to be a simple and calm person living on a small farm. Weirdly, she has a collection of small porcelain figurines. Wilkes is able to notice even the slightest change in them. This may be an indication of an obsessive personality.

The start of the ordeal

At first, Paul Sheldon believed that he was safe. After being injured in an accident, he woke up at the house of a retired nurse who turned out to be a fan of his work. She promised to take care of him and to help him recover. She told him that she has already informed his family and the hospital about what happened. Also, she told him that as soon as they open the roads, she could take him to the nearest hospital.

But nothing could be further from the truth. Little by little, Wilkes shows signs of bipolar disorder: from a kind tone and excessive kindness to hysteria, anger, and aggressiveness attacks. Wilkes became furious when she discovered that Paul Sheldon killed Misery Chastain in his latest novel. This aggressive and obsessive personality may have existed since childhood.

Wilkes has a huge childish side. She’s a fan of fictional characters. She discovered Paul’s novels when she was trying to avoid bad times. Annie Wilkes became so obsessed with the stories that she ended up kidnapping the author.

When she discovered that the main character was killed in the last book, she became cold. She turned her small farm into hell for writer Paul Sheldon. She became one of the best villains we’ve ever seen on screen.

The exposure to fame

Unfortunately, fame can be very dangerous. Being a public figure, our private life becomes open to debate, discussion, or criticism. A single mistake, a bad comment, a wrong answer, or a simple reaction may turn our lives into hell. Also, there are those who become obsessed with famous people. These obsessions can be very dangerous.

Annie Wilkes loves Paul Sheldon. She’s in love with her ideal image of him. Her obsession with him and her many mental problems led her to torture him. How could a person torture the man she loves? Her ideal love turned into an obsession.

The story of Annie Wilkes is chilling, yet very real. It’s not the first time that a person has been this obsessed with an idol. Remember that Mark David Chapman, John Lennon‘s fan, was the one who murdered him.

The artist’s freedom is questioned in this movie. Are artists really free to choose what to write? The answer is no. During the process, we see the advice and guidance Sheldon’s literary agent gave him to ensure more commercial success.

Sheldon and the publishing world

The author no longer wants to continue writing Misery. He wants to try something new. This bothered the publisher for fear of reduced sales. At the same time, it will also annoy the fans. The world of publishing will always choose the most profitable option, the most appealing one regardless of the quality of the work.

Misery shows us the other side of the writer’s life when he loses his creative freedom. Wilkes becomes Sheldon’s new “adviser” when she forces him to write what she wants. We learn that she has killed many people and became wicked. She’s a dreaded character.

“I am your number one fan.”

Cinema, Television, and Psychology
The Gender Gap and the Bechdel Test

A little over a year ago, actress Robin Wright spoke against Netflix for paying her less than her co-star Kevin…