Humans start to develop senses even before birth, while they're still in utero. Read more to learn about this fascinating process here! 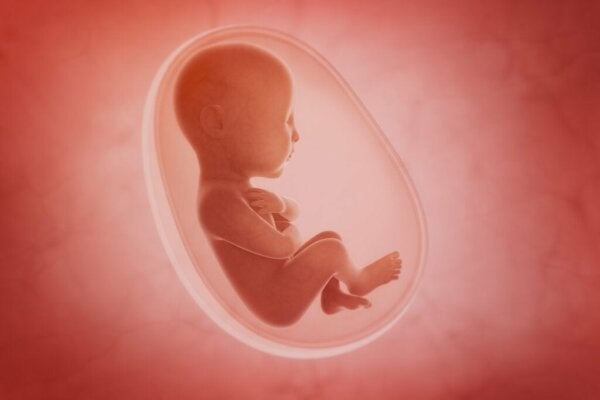 For the 40 weeks that babies grow in utero, their sensory development is on overdrive. Not only are they busy developing physically so they can function in the outside world, but they also perceive the world around them from a very early gestational age.

This fascinating process forms the basis of the baby’s early attachment to their mother. Unsurprisingly, the uterus is the perfect setting for fetal development.

The development of the senses during pregnancy plays a crucial role in brain development in utero. In today’s article, we’ll explain which senses develop first in the fetus. You might be surprised by what you learn!

Touch is the first sense that a fetus develops in utero, starting around week eight. The sense of touch starts with the sensory receptors in the face, primarily in the lips and nose.

Over the next few months, the tactile receptors start to develop in other body parts as well. At around 12 weeks, the palms of the hand and the soles of the feet develop these receptors. When babies are 17 weeks, they develop in the abdomen.

At around 12 weeks, the fetus can experience tactile sensations all over their body. The exception is the top of the head, which remains insensitive to touch until birth.

Interestingly, brain scans suggest that fetuses can’t feel pain until around 30 weeks. That’s when the somatosensory neural pathways are fully developed. Nevertheless, in the middle of the third trimester, the baby can perceive a wide range of sensations, including heat, cold, or pressure.

The sense of taste and smell

Taste and smell are closely linked; your sense of taste is actually 90 percent smell. Studies show that some flavors, such as vanilla, carrot, garlic, anis, and mint, are actually transmitted through the amniotic fluid.

In utero, the taste buds appear at around eight weeks. Between 13 and 15 weeks, fetuses already have taste buds similar to those of adults. Whatever the mother eats while the baby is in utero will permeate the amniotic fluid the baby ingests.

The sense of smell develops along with the sense of taste. From the moment a baby is born, it can identify its mother by smell alone. The baby can also easily identify the unique smell of its mother’s breastmilk.

In fact, if you place a baby on its mother immediately after they’re born, it’ll actually wriggle and scoot its way up to the nipple, guided by the smell of the colostrum. This is known as the “breast crawl”.

The auditory system is fully developed by 20 weeks. At approximately 23 weeks, the baby can respond to loud noises.

A 2014 study of premature newborns showed that playing a recording of the mother’s voice while the babies sucked on a pacifier was enough to improve oral feeding abilities and shorten their hospital stay.

Life in utero is mostly dark, but human skin does allow some light to pass through. Researchers have found that fetuses are twice as likely to track the movement of patterns of light that look like human faces. They’ve also seen the same pattern and preference in newborn babies.

This suggests that the preference for human faces could be innate, and not simply the result of experiences that happen after birth. It’s also a clear sign that the fetus responds actively to the outside world long before it leaves the womb.

Newborn babies are extremely near-sighted; they can only see things about eight inches away from their faces.

They can’t see colors the way we see them as adults, and they can’t identify shapes until they’re six months old. Newborns’ eyes are sensitive to bright light, which makes them close their eyes to avoid it. At one month, newborns can see colors but they often prefer to look at black and white images and toys.

At around seven months, most babies have a mature sense of sight. They also have the hand-eye coordination and depth perception necessary to reach toys out of their immediate reach. Their focus improves over the next two or three years as their eyes mature and they can see everything more clearly.

The evidence of early sensory development in utero opens up the possibility of stimulating the fetus during pregnancy. The choices a pregnant mother makes about what to eat and what kind of music to play could affect her unborn baby in surprising ways.

That being said, a significant portion of sensory development occurs after the baby is born. Consequently, the most effective sensory stimulation is that which babies receive after birth when it’s accompanied by cognitive development.

The Mind of a Baby – What’s it Like Inside?
Do you ever wonder what the mind of a baby is like? Is it the same as that of an adult or an older child? Actually, this is a rather fascinating subject. Read more »
Link copied!
Interesting Articles
Culture
The Best Quotes by José Ortega y Gasset

José Ortega y Gasset's quotes encourage you to reflect and ask yourself questions. They're a gift for anyone who wants to…

To learn more about misophonia and everything it entails, here's a story: "I've been like this almost all of my…