Scribbling: The Secret Language of Children

Scribbling can be a door to the secret language of children. Understanding it can be the key to unlocking that door. 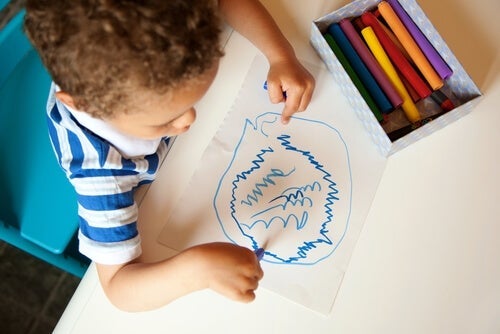 Children amaze us with their creativity. Since they have no internalized standard way of communicating, they can be very inventive with this in the context of social interaction. One way they do this is by scribbling. Scribbling here refers to markings with a particular and concrete meaning. However, scribbling may be more than just mindless markings and may represent a form of communication.

As children get older, their ways of communicating become more structured. As this happens, scribbling transforms into drawings, words, phrases, and stories as their new tools for communication.

In this article, we’ll show you what children’s scribbling means. You’ll see that this is a sort of secret language. You’ll also learn some other things about this world of expression.

Scribbling: What is it?

Scribbling refers to creative markings that tend to become more complex as a child gets older. In the beginning, it can seem disordered and impulsive. That’s because the infant hasn’t developed fine motor skills. Nevertheless, every marking does hold some significance. We would understand that if the child could explain what they have scribbled out or if we had the resources to interpret it.

So we’re talking about a form of communication. That’s why psychologists and psychiatrists interpret scribbles in their work. In other words, they use these as instruments to analyze the child’s problems. These could be biological, as they reflect the child’s stage of development. On the other hand, they could be psychological, as they allow the child to express their internal world. Scribbling is essentially made up of two components:

Thus, scribbling is related to sensory and motor aspects. The first reflects what the child perceives as well as the stimuli that they’re sensitive to. As for the second, the motor element is what allows them to act on their external world.

The secret language of children

Scribbling is a type of language. That’s because it’s a way in which children express themselves. Even though this is a very basic act, it can be charged with emotion. With this, we mean that scribbles are manifestations with which the child lays down communication bridges with others. This is especially important as they may not know how to communicate with words or may prefer not to do so.

As lecturer and psychologist Evi Crotti and physician Alberto Magni, who specializes in psychotherapy and psychosomatic illnesses, suggest in their book Scribbling: The Secret Language of Children, “the act of scribbling on a piece of paper makes communication between child and adult possible” (pg. 19).

Language can take on different forms. One dictionary definition is “the ability of a human being to express and communicate with others through articulated sounds or other signaling systems”. Based on this, you can see that this isn’t just about speech. It also includes writing, nonverbal communication, and symbols. As such, there’s room within the realm of language for scribbling, as it’s also a form of expression. It’s a way for children to tell us something about their internal world.

In order to be able to interpret scribbling, you have to take two fundamental aspects into account:

In the following section, we’re going to show you some interpretation patterns. However, you should remember that every child is unique. A few descriptions that we present here aren’t enough to get a complete and integrated interpretation of an individual child’s scribbling. These are merely typical interpretations that might help you if you feel or discover that something is happening. In any case, don’t hesitate to go to a professional if you think it’s necessary.

It’s important to pay close attention to details in order to be able to interpret children’s scribbles. Keep the following in mind:

The meaning of colors

Colors can also hold meaning. They can reveal traces of aggression, joy, love, etc. The psychology of color tries to categorize these possible meanings. For example, red could be representative of impulsivity, yellow of joy, black of fear, sadness, or aggression, and white of tranquility.

Scribbling can be a window into a child’s internal world. Paying attention to these scribbles can help you know how they’re feeling. This is really a marvelous language that becomes more and more elaborate as time goes by. However, even though it’s “secret” because we don’t understand it at the beginning, we can come to discover meanings in it. That way we also come to be more aware of the child’s personality and also what’s happening in their life.

The Broca Area and Language Production
Language production is the ability to communicate using language. Problems in the Broca area can have serious consequences in using language and communicating. Read more »
Link copied!
Interesting Articles
Theories
Color Vision in Humans - How Does It Work?