A Child's Drawing: Stages and Development 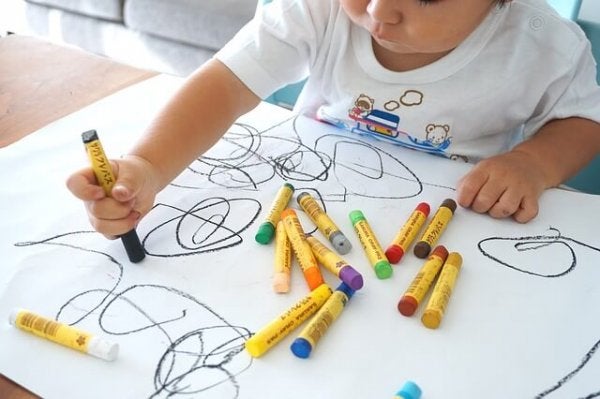 Kids love drawing and it’s a way they express their reality. They may choose to express something from their imagination or their particular vision of the world. If we look at a child’s drawing, we get a peek into how they see the world around them.

The relationship between the images that exist in a child’s mind and their drawings is very close. The mental images are internalized imitations, but they come out in drawings. Therefore, if we investigate the qualitative development of a child’s drawing, we will get a better understanding of their symbolic capacity.

The stages of a child’s drawing

In this article we are going to talk about studies that Luquet did on the development of a child’s drawing. First of all, he stated that a child’s drawings are realistic. The reason is that children are more focused on drawing the characteristics of reality than its artistic beauty.

The stages of a child’s drawings are: (a) fortuitous realism, (b) failed realism, (c) intellectual realism and (d) visual realism.

The act of drawing begins as an extension of the child’s motor skills. That’s why a child’s first creations will always be what we know as scribbles. These scribbles are his first experiments using his motor skills. They provide the basis for the stages to come.

Very soon the child begins to find a similarity between their drawings and reality around them. They will often try to capture it, even though they may lack the ability to do so. If you ask them what they are drawing, they may at first tell you that it is nothing. However, as soon as they find a similarity between their drawing and reality, they will consider it to be a true representation.

This stage is called fortuitous realism, since the representation of reality comes after or while the drawing is done. There was no real intention to draw what they eventually considered it to be. The resemblance is a coincidence. The child, however, welcomes the fact with enthusiasm. Once they see the resemblance, they may actually try to improve it.

In this stage the child tries to draw something he has in his mind. Unfortunately, due to certain obstacles, his intentions are frustrated and he fails. The main obstacle is his motor skills. They are not sufficiently developed with enough precision to be able to reproduce what the child wanted.

Another problem is a child’s attention span. He doesn’t pay enough close attention to what he is doing and overlooks certain essential details the drawing should have had.

According to Luquet, the most important aspect of this stage is “synthetic incapacity“. This is the child’s difficulty in organizing, arranging and orienting the elements of a drawing. When drawing, the relationship between the different elements is very important. Proper organization of these elements is what will make the drawing a success or a failure.

However, at this stage of their development, children have problems with this. For example, if they’re drawing a face, they may put the mouth above the eyes.

In this next stage the child has now overcome the obstacles of the previous stage. Nothing can now prevent the child’s drawing from being completely realistic. However, it is important to point out that childish realism does not resemble adult realism. The child does not capture reality as he sees it, but as he knows it to be. This is why Luquet called the stage intellectual realism.

It is possibly the stage that best represents a child’s drawings. It is also the most interesting one for the purposes of research and study. Throughout this stage we will see two essential characteristics represented by the child’s drawings: “transparency” and “avoidance“.

When we talk about “transparency” we are referring to the fact that the child draws things that are hidden. They take away whatever is obscuring certain objects and make them transparent. For example, they draw a chicken inside an egg or feet inside the shoes.

The other process, “avoidance”, consists of when children ignore the object’s perspective. An example of this is to draw the facade of a house vertically and the interior of the rooms as seen from above.

These two characteristics show us how visual factors are not relevant when expressing things in their drawings. Instead, the child refers to his mental representation and tries to capture what he knows in his drawing. That is why “errors” appear, such as the transparency of opaque things or the lack of perspective in certain objects.

From the age of eight or nine, a child is able to draw almost like an adult. Now the child can draw reality as he sees it. To do this, the child adheres to two rules: perspective and adherence to the visual model.

The characteristics of intellectual realism disappear completely. They eliminate non-visible objects, adopt a single perspective and maintain proportion on dimensions. They now adopt visual realism. Because of this, children’s drawings lose that childish look. Many children begin to lose interest in drawing because they start to feel that their drawings will never look realistic.

As we conclude, we should mention that while we can show these stages in a child’s development through drawing, we have to be cautious. Since this development  is not as linear as we might think, we will find some who are more advanced and others who lag behind in any one particular phase. Some children who find drawing far too difficult will often decide to adopt the strategy of an earlier stage.

The 6 Most Important Theories on Development
Development psychology is the study of humans over all their stages of life. It looks at how cognition develops and how behavior changes over time. It is an interesting discipline that contributes a wealth of knowledge to the field of applied psychology. Read more »
Link copied!
Interesting Articles
Psychology
Today I’ll Go Find All the Good That Life Has Ready for Me

Rafael Santandreu offers a valuable viewpoint regarding happiness and well-being.  He suggests that all fears are due to thoughts that…