Rosa Parks was a civil rights activist. She refused to give up her seat to a "white" passenger on a segregated bus in Montgomery, Alabama. 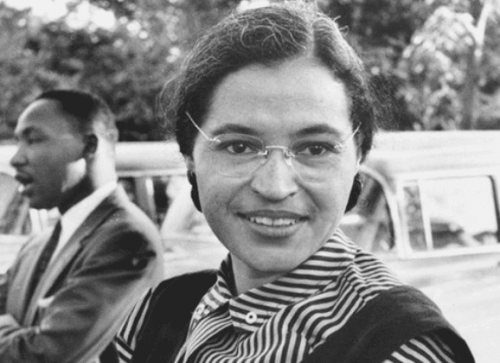 Rosa Parks was the woman who unleashed one of the largest protests in the framework of the African American Civil Rights Movement in the United States. In fact, she did it with a simple yet powerful action. She basically refused to give up her bus seat to a white passenger.

The police arrested and jailed her for it. This sparked the Montgomery Bus Boycott. Encouraged by Martin Luther King, these protests, an act of civil disobedience, finally helped abolish segregation laws.

The racial segregation law dictated that African Americans should occupy the back seats on public buses. The front seats were exclusively for whites. They could use the middle seats interchangeably although Caucasians had the preference. So, of course, any African American had to give them up at any given moment. The result of Rosa Parks’ refusal to yield her seat was the creation of the Civil Rights Act of 1964.

Who was Rosa Parks?

The daughter of a teacher and a carpenter, Rosa Parks lived during the era of racial segregation in the United States. She graduated from Alabama State Teachers College and married Raymond Parks. Rosa’s childhood unfolded in the middle of racial segregation in public toilets, schools, transportation, and restaurants. Rosa always remembered her grandfather at her front door with a shotgun, as the Ku Klux Klan paraded down the street.

Along with her husband, she joined the cause for the defense of the Scottsboro Boys, a group of black men falsely accused of raping a white woman. She also joined the NAACP, the National Association for the Advancement of Colored People. During her youth, Rosa worked at Maxwell Air Force Base. Since it was federal property, there was no segregation there. She used to say that Maxwell opened her eyes.

Racism is part of the process of categorizing people. Certain characteristics are attributed to a certain group from the perspective of another group that considers itself superior. There are three main concepts in the analysis of racial discrimination and prejudice:

How does one become a social activist?

As you can see, oppression and inequality go hand in hand. Thus, the factors that influence people to become social activists are mainly the perception of injustice they experience when belonging to a social group. Inequality and other social emotions play a role as well.

Some psychosocial theories attempt to explain the phenomenon of the Montgomery Bus Boycott but it seems that emotions explain it best (Ruiz-Junco 2013 and Bosco 2007). This is because shared humiliation develops in oppressed people along with other contrary emotions such as courage and determination.

A. Jasper (2011) concluded that negative and positive emotions must manifest in a person at the same time before they become social activists. It wouldn’t exist with negative emotions only. Emotions play an essential role in identity and social behavior.

When asked, Rosa recounted that she refused to give up her seat to the white passenger simply because she was tired. And it wasn’t just the physical exhaustion of that day. She was tired of being treated as a second-class citizen; tired of the injustice and unequal treatment. Furthermore, courage and determination also motivated her social disobedience.

Rosa Parks fought for civil rights throughout her entire life. Indeed, she taught the world how change can occur with a simple action. On the day she died in 2005, all operating Montgomery buses had a simple black ribbon on their front seats. Why? Because they were reserved for Rosa Parks.

Martin Luther King Jr. and His Quest for Civil Rights
Martin Luther King Jr. was an inspiring man who embodied one of those humans that only come by once in a lifetime and represent the best of human beings. Read more »
Link copied!
Interesting Articles
Biographies
The Life of Caravaggio: A Contrast in Light and Shadow