Emmeline Pankhurst and the Suffragette Movement

Emmeline Pankhurst was a charismatic leader of women's suffrage movement and fought tirelessly for their right to vote. In this article, you’ll learn about her life and her political and social achievements. 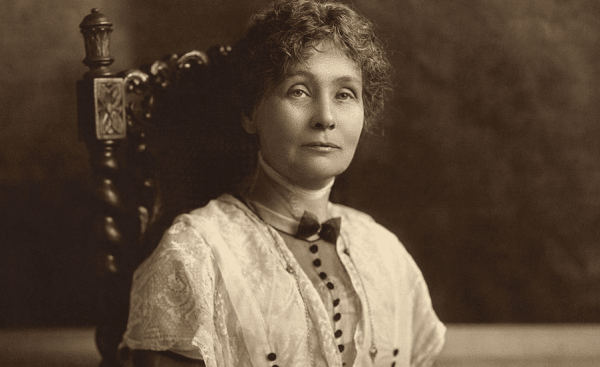 Today, we’re going to explore the life and achievements of a political activist and suffragette. Emmeline Pankhurst was at the forefront of the movement that fought to give women the right to vote.

Emmeline Pankhurst has gone down in history as the personification of the passionate belief that women deserve the same civil rights as men. She struggled tirelessly her whole life for women’s suffrage and fought to eradicate poverty and ignorance.

Time Magazine considers her one of the 100 most important people of the 20th century. She was a charismatic leader and a gifted speaker. She inspired many people to join her in the fight.

So how did her struggle play out? How did she influence future generations? In what ways did she manage to change her present, which in turn changed our future? In this article, we invite you to discover a little more about the incredible Emmeline Pankhurst.

Emmeline Pankhurst was born on July 15th, 1858. Her father, Robert Goulden, came from a family of political activists. Emmeline’s mother, Sophia Crane, was also a political activist from the Isle of Man. When Emmeline was a little girl, both of her parents supported the movement to abolish slavery.

When she was 20 years old, she met and fell in love with a lawyer and political activist who was in favor of women’s suffrage and educational reform. His name was Richard Pankhurst, and he was 24 years older than Emmeline. They married and had five children.

The suffragist organizations of the time had begun to give in to the idea of allowing only single women and widows to vote. Emmeline and her husband, however, rejected that proposal completely and started a new group, the Women’s Franchise League.

This new movement advocated for the right of all women to vote without exceptions and equal rights to divorce and inheritance. Shortly after its inception, the movement radicalized to the extreme left and many of its members quit.

After a time in London, Emmeline Pankhurst went back to Manchester. That’s when she started to get involved in political activism on her own. Emmeline finally joined the Independent Labour Party after being rejected several times for being a woman. She then got involved in distributing food through the Committee for the Relief of the Unemployed.

The state of poverty and helplessness that she saw people in affected her deeply. The experience inspired her to get involved in the worker protection reform movement. After several incidents, Richard fell ill and died. He left Emmeline with significant debt and in charge of their entire family.

Pankhurst got a job at City Hall and started to denounce women’s social conditions in the region. At the same time, her by-now grown daughters were also involved in the suffrage movement.

Disappointed in political parties and suffragist organizations that weren’t achieving anything, she decided to leave all of those groups. Then, she founded the Women’s Social and Political Union (WSPU). This union was open only to women and its motto was “Deeds, not words”.

It didn’t take long for the WSPU to radicalize and start to use violent tactics. Their goal was to get attention and revenge. They popularized window breaking, attacks on private property, and prison hunger strikes.

The men in Pankhurst’s party and the authorities attacked her and others on more than one occasion. The government also imprisoned her several times. During this period, she had sold her house in Manchester and was traveling through England and the United States, giving conferences about her work.

Emmeline Pankhurst and the Women’s Right to Vote

At the beginning of World War I, Emmeline negotiated with Parliament to secure the release of women from WSPU. In return, she promised a truce, that she wouldn’t do any more violent things. The agreement also included the support of women from the organization that was supporting the British fight against Germany.

This agreement created conflict within the movement. It was so controversial, in fact, that it created an insurmountable division between Emmeline and one of her daughters. After the war, she became disillusioned with leftist politics and actually joined the conservative party.

At the time, the conservative party was the most popular political party. Pankhurst wanted to use that energy for the women’s suffrage movement. Her years of dedication and hard work paid off just a few weeks before she died at the age of 69. Pankhurst lived to see women win the right to vote.

The Violent Side of Women’s Suffrage

Pankhurst was a controversial, energetic, and radical activist. She attacked some political ideas and promoted others, never losing sight of her goal. People hated her and loved her in equal measure. Pankhurst was an inspiration to women from all walks of life.

In conclusion, Emmeline Pankhurst represented the more radical side of women’s suffrage. Not everyone in the movement supported her violent methods, but these traditionally “masculine” strategies ended up being the ones that drew attention to the women’s’ cause. Pankhurst dared to speak the only language that the patriarchal system seemed to understand: violent protest. Whether or not you agree with her tactics, one thing is certain: the system listened and changed.

Mary Wollstonecraft: The First Feminist
In this article, we're going to tell you a bit about Mary Wollstonecraft, a fascinating figure who some people consider the first feminist. Keep reading! Read more »
Link copied!
Interesting Articles
Culture
How We Explain Other People's Behavior

Although it's hard to believe, and even though you see it in others but not in yourself, it's a very…

Psychological tests come in all shapes and sizes, and some of them are really interesting. And this one definitely awakens our…

Culture
Intelligence and Sense of Humor

A good sense of humor, the one that knows how to apply irony and wit to a reality that's often…