The Psychology of Corruption

In this article, we'll discuss corruption from a psychological perspective. Corruption is widespread in our current societies and a betrayal of entrusted responsibility. 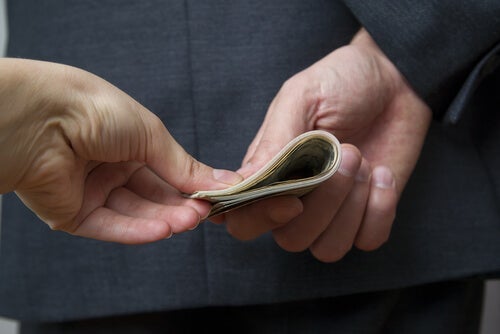 Corruption has become a recent area of interest within the field of psychology. Here, we discuss what it is and the various types that exist. Finally, we delve into the topic from a psychological perspective.

Nowadays, we hear the word “corruption” with much greater frequency than we like. For instance, take the never-ending stream of news media in which public officials are implicated in corrupt acts. In the words of Mexican poet and peace activist Javier Sicilia:

“If we don’t have honest, courageous, and efficient police, judges, lawyers, and prosecutors; if they surrender to crime and corruption, they’re condemning the country to the most despairing and heinous disgrace.”

Corruption is a form of authoritarianism characterized by the use of public assets for personal gain (Benbenaste, 1999). Furthermore, there are two distinct types:

Corruption stems from the influence of commercial value on the judgments of those in power. In other words, politicians are corrupt when they use their position to obtain more money than legally allotted by their jurisdiction.

Corrupt officials seek to gain from the market beyond their legal income. However, unlike a business, they aren’t producing goods or services nor competing in market dynamics.

Therefore, the corrupt aren’t productive for the State and can’t sustain themselves in the competition inherent to a healthy market.

“Whoever votes for the corrupt, legitimizes them, justifies them, and is just as responsible as the corrupt.”

Corruption also occurs in pre-capitalist societies. It’s predominant in developing nations or in countries whose political systems are outdated.

The unconditional dependence between leader and supporters creates a partisan split, either loyalty or betrayal.

When the leader obtains a position of political power, they recruit loyal followers to perform duties for which they’re often unqualified.

When people think of corrupt acts, most often, they think of the first scenario. However, surveys conducted in Argentina since 1999 show that this second type of corruption is often not considered as such in pre-capitalist societies. Additionally, citizens in pre-capitalist societies view government inefficiency as just as bad, if not worse (Benbenaste et al., 2005).

“If a robot can be created capable of being a civil executive, I think he’d make the best one possible. By the Laws of Robotics, he’d be incapable of harming humans, incapable of tyranny, or corruption, of stupidity, or prejudice.”

Political psychology and the corrupt

Anderson and Tverdova conducted a study in 2003 on the impact of political alliances and corruption on societies. They reported that the citizens’ attitudes toward their governments were negative when corruption was high.

Furthermore, the study stated that the citizens criticized their governments and didn’t trust local authority, even despite the fact that these countries have systems of self-governance, such as democracy. On the other hand, criticism and mistrust were much less common amongst those in power.

In conclusion, this study showed that, while government practices that inhibit democracy are key indicators of the political climate, corruption doesn’t necessarily reduce the electorate’s support for political institutions in matters of politics, culture, and economics.

The outcomes of this research are interesting in drawing conclusions on the analysis of corruption from a psychological perspective.

Gender and Corruption: Are They Related?
Are women less corrupt than men? The simple answer is yes. However, the relationship between gender and corruption has many nuances. Read more »

Link copied!
Interesting Articles
Psychology Today
The Projects and Dreams the Pandemic Took Away: How to Face the Future