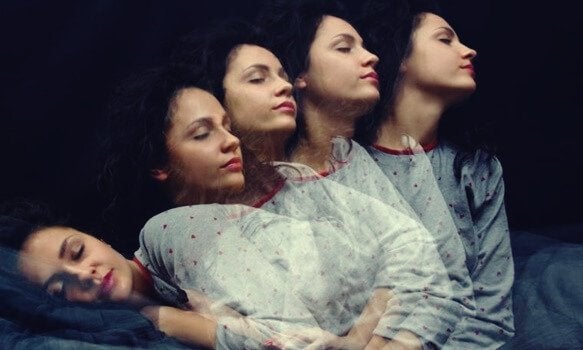 Sleepwalking is a sleep disorder that makes a person get up from bed at night and even talk while they’re sleeping. In fact, the person may act normal, as if they were awake, and family members are usually scared that something may happen to them in this state. For example, if this person goes outside, they could get hit by a car.

Despite what we know about this disorder, today we’ll bust some myths about sleepwalking that we thought were real. Some of them have made their way into society as common knowledge, although they’re not true. However, many sleepwalking myths have resulted from certain beliefs that we haven’t questioned nor confirmed.

1. It’s dangerous to wake a sleepwalker up

A popular sleepwalking myth states that waking up a sleepwalker is very dangerous. Some people say they can have a heart attack and die, while others say that the sleepwalker may go crazy due to the situation. However, neither is true.

What happens when we wake a sleepwalker up? Sometimes, we have such detailed dreams that they may seem to be real and, when we wake up, we feel disoriented. Well, something similar happens to someone when they’re sleepwalking and wake up in a different place from where they fell asleep.

A heart attack is a possibility if that person has cardiac problems, but that rarely happens. Something that really does happen often is that the person feels very confused, disoriented, and may be somewhat cranky or short-tempered. What you should do at that moment is calm them down and tell them what happened. It’ll be very likely that they know about their condition and will go to bed again.

2. They can’t get hurt in that state

Another myth is that the sleepwalker cannot feel pain or get hurt when they’re having a sleepwalking episode. That is why the people who redirect the sleepwalker back to bed don’t worry if they trip or hit something.

Sleepwalkers don’t lose sensibility, nor do they suddenly become immune to any stimuli. They can still get hurt. That’s why it’s important to be careful when taking them back to bed. In fact, if they hit something hard enough, they may even wake up.

Sleepwalking episodes tend to happen to young people, more specifically children between the ages of 3 and 13. As they get older, the episodes become less frequent.

3. Sleepwalkers always have their eyes closed

We’ve all seen horror films where sleepwalkers have their eyes closed. But, as we said earlier, this only happens in movies. In real life, the situation is very different.

Sleepwalkers don’t always have their eyes closed. How could they see if the door is open or not? How would they go up or down stairs if they can’t see them? They can do all this because they have their eyes open and can see where they’re going and what’s happening around them, even if their brain is in deep sleep.

4. It happens every night

This is another myth about sleepwalking that has penetrated modern culture. People tend to believe that sleepwalkers have an episode every night. In other words, that every time they go to sleep they must be taken care of because it’s very likely that they’ll get up from bed. This is a misconception about this condition.

Sleepwalkers don’t get up in their sleep every night. This tends to happen when they’re going through a stressful period in their lives. Stress is what makes a sleepwalker have episodes during a week, month, or just a few sporadic days. This is why it’s important to treat stress.

A person will have more sleepwalking episodes the more stressed they are. However, these will subside if they reduce their stress levels.

5. You have to lock them in

Family members tend to worry about a sleepwalker to the point that they may lock them in or restrict them physically. However, this isn’t a positive thing to do. It’s more likely for a sleepwalker to hurt themselves when they’re locked in or are restricted to a small space.

The ideal action is to close doors and windows. Having window blinds is a good idea because, if the person opens them, they’ll wake up from the sounds they make. It’s equally important to be careful and not leave any sharp objects in their reach, nor anything they can hurt themselves with. For example, objects like knives or lighters should be kept in difficult places to reach.

Some security measures are needed, which will be different for each sleepwalker. Some patients tend to go outside while others go to the kitchen to eat something and may even cook something. That’s why experts recommend keeping all potentially dangerous objects out of their reach.

Although there’s still no specific treatment for sleepwalking, it’s recommended to have good sleeping habits. Here are some things that can help:

Culture
Believe in Yourself: The Power of Self-Confidence

When nobody believes in you, you have to believe in yourself. When someone says you're not worthy, that your moment has…

There are many forms and manifestations of life. Human beings are only one of them. Our capacity to think abstractly…