People often ignore the psychological aspects for diabetes sufferers, and in this article we're going to highlight a number of them. 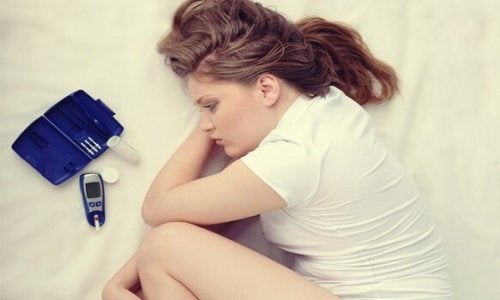 Experts have largely ignored the psychological aspects of diabetes since the illness was first discovered. However, those who suffer from this disease often experience stress, anguish, and even depression.

Thankfully, now there’s a new approach that takes all these multiple factors into consideration. Doctors now place more emphasis on these vital aspects of a patient’s life.

The metabolic changes involved in diabetes mellitus completely alter a person’s day-to-day life. Because of this, a fact that’s sometimes neglected is the close link between type 1 and 2 diabetes and mental health problems.

There’s evidence that the risk of depression is higher in diabetes patients. Thus, the psychological aspects are there; they’re obvious and can’t be neglected. Ignoring the psychosocial factors in people with diabetes translates into not guaranteeing the correct treatment tailored to the needs of each diabetic and their family.

The professionals’ empathy and adequate training will help them prescribe the correct psychological treatment that’ll improve these people’s quality of life.

While type 1 diabetes usually manifests in childhood, type 2 diabetes is the most common form of diabetes in the world and accounts for approximately 90-95% of all cases. It manifests in adulthood, and in a big percentage of cases can be linked to an unhealthy way of life, including eating habits. In such cases, our bodies stop producing enough insulin to be able to use glucose as a source of energy.

Apart from the causes that can lead to the manifestation of this common metabolic disorder, we must keep other factors in mind. A holistic approach to this disease is necessary. Many doctors focus their attention on the physical-organic changes that diabetes can produce. Although they should do this, there’s something that medical professionals often neglect: mental health.

A Disease that Overwhelms Many Patients

The psychological factors that diabetes often causes are pressure, fear, and stress. This is an unusual condition that patients have to deal with on a daily basis.

The patient must monitor their glucose readings and make decisions about what to do. Apart from the injections, there’s the constant daily pressure involved in managing the disease itself.

This constant need to monitor the illness often affects the self-esteem of diabetes patients in a very negative way. They often suffer from emotional distress and even eating disorders. In addition, they often feel helpless.

The Psychological Aspects of Diabetes and Mental Health

Regarding anxiety disorders, the incidence rates are equally striking. Diabetic patients have a 40% more chance of suffering from anxiety in comparison to those who don’t suffer from the disease.

As research has revealed, this condition also causes metabolic changes. Studies suggest that the inflammatory changes associated with diabetes itself can be linked to the development of depression.

It was discovered that pro-inflammatory cytokines interact with a different area of the brain and with the neurotransmitters that are responsible for this disorder.

The Need for a Holistic Approach to Diabetes

The psychological aspects of diabetes shouldn’t be taken lightly. A person who isn’t well psychologically won’t be able to adequately control their own condition.

We need another type of approach, a holistic approach where doctors, psychologists, nutritionists, and social workers all work together to help meet the person’s needs.

Diabetes won’t limit a person’s quality of life as long as there are sufficient resources and support in every aspect of the disease.

In many different countries, universal health coverage remains something isolated and punctual, pretty much a luxury. The reality is that…

Interestingly, most of the good times often take place around a table. Unfortunately, for many people, this poses the eternal…