Read all about false pregnancy or pseudocyesis in this article! 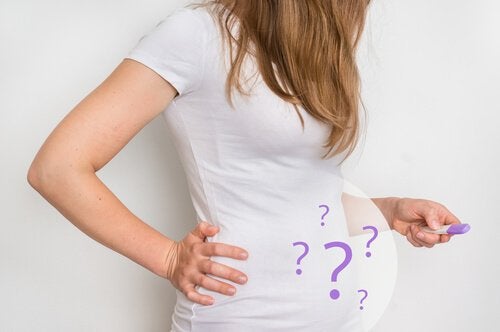 False pregnancy is also known as pseudocyesis. John Mason Good first coined the term in 1823 and experts now consider it the most distressing psychosomatic condition in medical literature.

Pseudocyesis is the only psychosomatic condition whose psychological etiology doesn’t leave room for doubt. On the other hand, men can experience it too. False pregnancy has been put into different categories of psychiatric disorders, such as conversion disorders or hysterical conversion disorders.

Pseudocyesis is a somatoform disorder, meaning that those who have a hidden emotional need, such as anxiety or lack of affection, manifest it through physical symptoms.

Pseudocyesis is when a woman thinks she’s pregnant without really being pregnant. In fact, she might even show signs and symptoms of early pregnancy.

This is a very important characteristic of somatoform disorders. It’s highly common in those who have problems identifying their feelings and talking about them (a personality construct called alexithymia) and that’s why they express it with a “hidden language.” In this case, through a false pregnancy.

“Whether your pregnancy was meticulously planned, medically coaxed, or happened by surprise, one thing is certain — your life will never be the same.”

According to psychiatry experts, pseudocyesis affects 1 to 6 women in 22.000. Paddock divided women who suffer from pseudocyesis or psychological pregnancy into three categories:

Signs and symptoms of false pregnancy

After studying a series of reported cases, Barglow and Brown summed up pseudocyesis symptoms:

Sometimes, the symptoms can be so real and similar to those of real pregnancy that they may even deceive doctors.

“Making the decision to have a child – it’s momentous. It is to decide forever to have your heart go walking outside your body.”

It’s not easy to convince a woman that she’s not pregnant when she’s been thinking she is for months. In general, it’s hard to make her see that she’s living in an illusion she created in her own head. More often than not, pseudocyesis is the escape route her brain found to deal with psychological difficulties.

Thus, it’s convenient to diagnose this issue as soon as possible. It’s necessary to do different blood tests and sonograms to convince the patient that she’s not pregnant. The treatment in these cases is more psychological than pharmacological. Specialists have to analyze why the patient invented the pregnancy and what internal conflict led her to that situation.

Gynecologically speaking, there’s no need for treatment, unless the patient still believes that she’s pregnant.

Couvade Syndrome or Sympathetic Pregnancy
Couvade syndrome or sympathetic pregnancy is when a partner experiences of of the same symptoms of their pregnant partner. Read more here! Read more »
Link copied!
Interesting Articles
Culture
The Seven Keys to Maintaining Your Energy

Energy is that vital strength that depends both on our physical and emotional state. It's not easy to maintain energy…

Culture
The Importance of Poetry

Something surprising just happened. A poet has won the Spanish equivalent of the Got Talent television contest. César Brandon, a 24 year old, has managed to captivate the public simply with…

Culture
The Legend of Sakura: A True Love Story

The legend of Sakura takes place hundreds of years ago in ancient Japan. At that time, the feudal lords fought…