Have you experienced post-coital tristesse? Read this article to learn more! 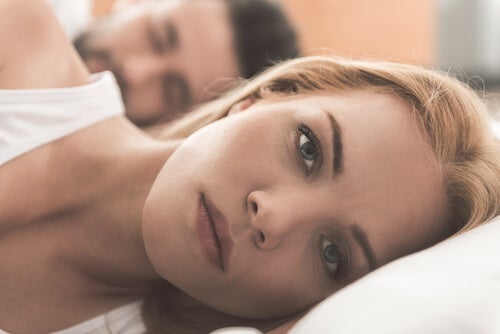 Some people feel depressed after having sex, which is called post-coital tristesse. This is completely normal if the act ends fast and the person doesn’t orgasm.

Some studies indicate that ten percent of the population experience post-coital tristesse. This is an inexplicable sadness after having sexual relations. However, it isn’t related to the act per se. Even though it was a pleasant experience, the person feels depressed afterward.

Actually, post-coital tristesse isn’t an illness or a dysfunction. In most cases, it’s a type of emotional state that doesn’t cause major consequences. However, if this state continues for a long time, it could indicate a deeper problem.

Up until now, science hasn’t shed light on everything about this emotional state. There are various theories concerning this. We must say that none of these theories can explain all of the cases because what applies to some people doesn’t apply to others. This is due to the fact that post-coital tristesse may be due to many factors.

The International Journal of Sexual Health published a study that talked about depression after having sex. Even though it can vary from one person to another, the main symptom is sadness that occurs just after intercourse. However, this feeling is said to be inexplicable, since it doesn’t seem to correlate with the pleasure of the experience.

This emotional state usually lasts a few minutes. Nevertheless, some people keep feeling that way for several hours, and some even feel depressed for several days.

People describe the feeling as emptiness. They feel like crying, but can’t explain why. Also, they feel irritable and in a bad mood and want to isolate themselves.

According to doctors Brian Bird, Robert Schweitzer, and Donald Strassberg, who’ve studied this condition, a type of hormonal change occurs during sex. Later, the body tries to stabilize after climax. This dynamic causes hormone levels to drop abruptly, bringing about depression.

Dr. Richard A. Friedman is the director of the Weill Cornell Medicine’s Department of Psychiatry. According to him, during an orgasm, there’s a strong decline in amygdala activity. This area of the brain regulates the feeling of fear.

Thus, during sex, the feeling of fear and everything associated with it notably declines. After an orgasm, the brain wants to recover quickly from these sensations, since it’s essential for survival. That’s why these emotions rebound, which produces that strange feeling of emptiness.

The psychological causes of post-coital tristesse

The human being isn’t merely biology. Because of this, what happens to us can’t just be explained with hormones and neurotransmitters. If this were the case, everyone would suffer from post-coital tristesse. However, there are notable variations regarding this aspect. This is due to the fact that symbolic elements also translate into feelings.

Some psychologists have indicated that post-coital tristesse is more intense in those who have mixed feelings about sex. Sometimes, people feel guilty about experiencing pleasure from sex due to a very strict upbringing or personal traits or trauma.

Similarly, this condition could be due to not being able to reach an orgasm. Thus, the person feels frustrated, which manifests with depression.

When should you worry?

This condition is more common in women than in men. As we’ve mentioned, it’s normal in most cases. When it disappears after a few minutes, there’s no reason to worry.

The length of this emotion is a definite factor, as well as the intensity of the feeling. If it lasts a long time and the experience is intense, it’s likely that there are other underlying problem s. This could be just a manifestation of a more serious state of depression that requires professional help.

Likewise, maybe the sadness derives from bad sex or your sexual partner’s attitude. If this is the case, the depression can be a warning sign of an issue in the relationship. The best course of action is to consult a professional if the problem continues.

In July of 2015, UN member states reached a final agreement about the Sustainable Development Goals (SDGs). They committed to…

Oftentimes we think that being too impulsive or “telling it like it is” is negative. We think it makes us look…