Studies show that becoming a father is a complex and wonderful experience that can even trigger hormonal changes. 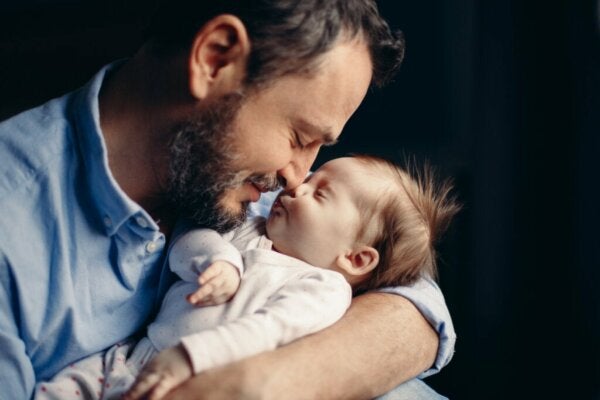 Becoming a father is a very intense experience for some men. So much so that some dads experience a similar situation to what women experience when they become mothers. Several studies show that fathers can also undergo physiological changes.

The studies found that, on a biological level, men come into the world with the tools that enable them to be fathers and enjoy the experience. Thus, the fact that some aren’t very involved in raising their children is more related to cultural factors.

Just as being a mother means different things to different women, men have a broad range of experiences when it comes to fatherhood. What we know for sure is that nature gives both men and women what they need for parenthood to be meaningful and gratifying.

“Becoming a father, I think it inevitably changes your perspective of life. I don’t get nearly enough sleep. And the simplest things in life are completely satisfying. I find you don’t have to do as much, like you don’t go on as many outings.”

The hormones of fatherhood

A study conducted by researchers at Emory University and published in the journal Hormones and Behavior studied the relationship between the experience of becoming a father and hormonal changes. They recruited a group of volunteers who all had healthy, one- or two-year-old children.

They discovered that, when the participants saw photos of their children, the neural activity in their brain systems associated with reward and empathy increased. That’s due to an increased production of oxytocin, the famous “love hormone”. Previous studies have shown that the same occurs to mothers.

This data corroborates the conclusions from a 2014 study that was published in the journal PNAS. It also found that fathers who become the primary caregivers for their children demonstrate brain activity very similar to mothers.

Postpartum depression is the feeling of sadness, emptiness, and apathy many women experience after giving birth. According to some estimates, it affects as many as 30% of mothers. For some postpartum women, the experience is so intense that it’s often confused with psychosis.

Nevertheless, a study published in the medical journal Pediatrics by Dr. Craig Garfield showed another side of that story. The study found that a significant number of fathers also showed signs of postpartum depression. Researchers concluded that the symptoms were more visible in men who didn’t spend time with their children.

According to the data, up to 10% of first-time fathers experience these symptoms. They also found, in fathers, the equivalent to postpartum depression starts between the third and sixth months of the baby’s life. For mothers, it usually begins soon after they give birth.

According to Canadian psychologist Francine de Montigny, another expert on the subject, one out of every 10 men experience postpartum depression. She believes that what triggers these symptoms is the fear of failing as a father and the competition for the mother’s love and affection.

The studies we mentioned above corroborate these ideas. In fact, they show that the experience of being a father triggers positive hormonal changes. The increase in oxytocin production that the first study mentioned implies a mood close to happiness.

In the second study, the factors that lead to postpartum depression are more psychological than physiological. What we know for sure is that they exist and are often ignored.

Becoming a father can be wonderful. If you take full responsibility and immerse yourself in fatherhood, it can boost your well-being. Nevertheless, the data shows that men also need support and understanding to be able to enjoy this beautiful experience.

A Father Who Cares For His Baby Is Not Just “Helping”
A father who attends to the cries of his baby, rocks him, changes his diapers and teaches him his first words, he isn't "helping" the mother. Read more »

There's no doubt that having a child is a blessing. But the price of parental stress that raising a child entails is a completely different matter. In fact, you may…

A family is an organized system and the basic nucleus of society. In other words, it's a collective with rules, values, and certain behavior standards. There are also hierarchies and…