The subject of today's article is the first stage of Piaget's theory of development: the sensorimotor stage. 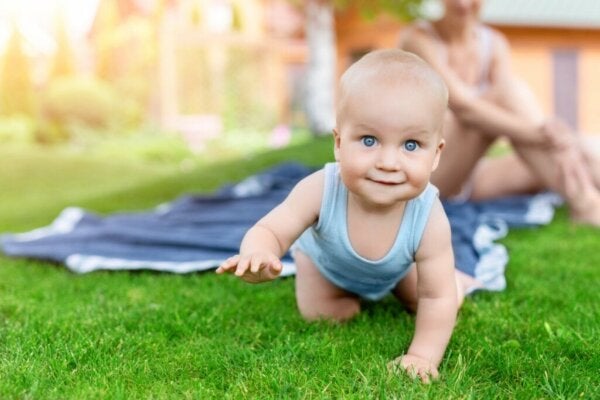 Parents, teachers, and anyone who has spent significant amounts of time with children have observed the developmental process that happens in the first years of their life. That process is the basis for Piaget’s theory of development. The first phase of that process (the sensorimotor stage) is the subject of today’s article.

Psychologist Jean Piaget was the author of one of the most important theories of childhood development ever written. He divided the process by which children develop their cognitive abilities into four stages. The first one, which starts at birth and lasts until the child is about two years old, is especially important due to the impressive amount of progress children make at that age.

Characteristics of the sensorimotor stage of development

Exploration and discovery of their surroundings

During the first two years of life, children start to explore and get to know their surroundings using their senses. Piaget highlights assimilation and accommodation as the primary learning processes. However, to understand these concepts, it’s important to know that children’s brains function on the basis of cognitive structures that change based on their experience.

Therefore, assimilation happens when the child uses their existing cognitive structures to relate to a new object or event. For example, when they suck on a bottle for the first time, they’re using the movement they’ve used to nurse at their mother’s breast.

Accommodation, on the other hand, happens when the new experience doesn’t fit into any of the preexisting cognitive structures. In that case, the structures have to change. This happens when, for example, a child whose concept of family includes father, mother, and children meets a family without a father because the father passed away.

Another fundamental element of the sensorimotor stage is egocentrism. Children this age are incapable of understanding things from a different point of view. In other words, the child believes that everyone sees, thinks, and feels the same way they do. That means they’ll have to learn to understand their individuality, separate from others and their surroundings.

One of the major developmental milestones of the sensorimotor stage is object permanence. That is, the understanding that objects, people, and events continue to exist even when the child can’t see, hear, or perceive them in any way.

Substages of the sensorimotor stage

During this entire stage, you can observe the mechanisms that the child uses for cognitive development.

The sensorimotor stage: the beginning of a fascinating journey

This first stage lays the foundation for the child’s future cognitive development. The lessons and skills they acquire in the first two years allow the child to engage with the world. Consequently, this is an enormously important phase of child development. Nevertheless, once this stage is over, a long and fascinating journey of cognitive development still awaits them.

5 Piaget Quotes About Infancy and Learning
Jean Piaget was a well-known constructivist psychologist who worked in the fields of child psychology and learning. Read on to discover his best quotes! Read more »
Link copied!
Interesting Articles
Theories
Existential Positive Psychology According to Paul T.P. Wong