Trypanophobia or the Irrational Fear of Needles

Do you know about trypanophobia or the irrational fear of needles? In this article, we'll be talking about its most frequent symptoms, as well as the most used treatments in therapy to fight it. 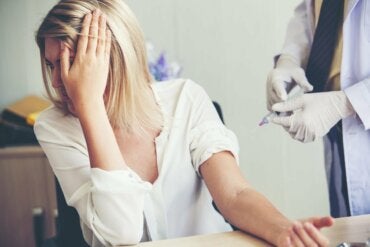 What’s this fear all about? What are its symptoms and possible causes? We’ll be answering these questions. In addition, we’ll talk about the two most effective psychological therapies when treating specific phobias like this one.

Trypanophobia or the irrational fear of needles

Trypanophobia is a specific type of phobia (an anxiety disorder). Its main characteristic is that it involves an excessive, intense, and irrational fear of needles and injections.

While it’s true that needles can cause harm if used improperly, the reality is that this phobia (as in all specific phobias), the fear is disproportionate.

As you can see, one of the symptoms of phobias is that they interfere with the person’s daily life in some way. In addition to this, the irrational fear of needles also produces high discomfort for the person suffering from it.

Where does this phobic stimulus come from?

The phobic stimulus, in all specific phobia, is the one that causes anxiety or intense fear. In the case of trypanophobia, the feared object is needles, but also syringes or the possibility of receiving a vaccine. Also, it’s important to note that, in some cases, the individual fears elements related to needles or syringes. For example, hospital-like smells, stretchers, and surgical materials, among others.

According to the criteria of the DSM-5 (2014), the symptoms of trypanophobia are the following:

We can further specify the symptoms of this phobia and group them into three categories:

But when do the symptoms appear? Basically, when the person thinks, visualizes, or touches needles. It can also happen when they go to the doctor’s office. In short, the symptoms will rise to the surface whenever the person goes through a situation related to needles.

Depending on the intensity of the phobia, the symptoms will or won’t appear in certain situations. For instance, for some people, it’s more than enough to think of needles for the symptoms to show. However, others need to be in actual contact with the needle for this to happen.

Different causes can explain trypanophobia or the irrational fear of needles. One of the most common causes is a traumatic experience related to needles. For example, being hurt while getting blood drawn.

In fact, it’s possible to explain this by using associative learning (classical conditioning), where the mind ends up associating a stimulus with a negative response. One of the key figures in this type of learning was American psychologist John Watson. In the 1920s, he made a boy named Albert be incredibly afraid of white rats.

However, like all phobias, it can also be acquired by vicarious conditioning. For example, having a relative who suffers from trypanophobia and seeing how much it affects them. Finally, some authors claim that human beings are biologically programmed (or predisposed) to developing certain types of phobias, especially those that allowed our ancestors to survive.

According to these theories, we develop certain phobias in order to manifest the fight or flight response, which would save us as a species. As a matter of fact, fears are latent in very primitive areas of the brain.

Treatment of the irrational fear of needles

From clinical psychology and according to the Guide to Effective Psychological Treatments by Pérez et al. (2010) and Caballo (2002), the two preferred treatments (the most effective) when it comes to treating specific phobias are:

It consists of exposing the patient to the phobic stimulus in a progressive manner. The therapist is in charge of doing this alongside the therapist

In the case of the irrational fear of needles, the person would be exposed to the phobic object in question. First by thinking about needles, then through images and videos, and so forth, so that they could touch them little by little, until they’re able to receive an injection, for example. The ultimate goal is for the person to face the situation without anxiety.

Through cognitive therapy, more specifically cognitive restructuring, the intention is to modify the irrational and catastrophic thoughts that the patient shows in relation to their phobia. In the case of the irrational fear of needles, these can be, for instance, “I won’t be able to stand the pain of the needle” or “It’ll hurt me”. It’s about replacing these thoughts with more realistic and functional ones.

The fear of needles and other related fears

The irrational fear of needles is often linked to other phobias as well, such as hematophobia (fear of blood) or aichmophobia (fear of sharp objects). In other words, if you suffer from trypanophobia, it’s likely that these other fears will also appear because the association is very simple.

In the case of hematophobia or aichmophobia, the psychological treatments used will be the same as for trypanophobia but adapted to this specific phobia.

On the other hand, although cognitive therapy and exposure therapy have proven to be the most effective therapies in these types of disorders, other alternatives can also help fight phobias, such as psychoeducation, mindfulness, and cognitive-behavioral therapy, among others.

Keep in mind that, if you feel your phobia is interfering with your daily life, your best bet will be to go to a professional who specializes in the matter (ideally, a clinical psychologist).

8 Strange Phobias You’ve Probably Never Heard Of
A quote from the famous Livy: “Fear is always ready to see things as being worse than they are.” We dedicate a few words today to the 8 strangest phobias. Read more »
Link copied! Next
Interesting Articles
Clinical Psychology
Hearing Voices and Seeing Things