Persepolis: The Other Truth

In general, people who live in the "Western" world are woefully ignorant about the history and culture of other places. Persepolis tells the story of a young Iranian girl who lives through the revolution and deals with Western ignorance firsthand. 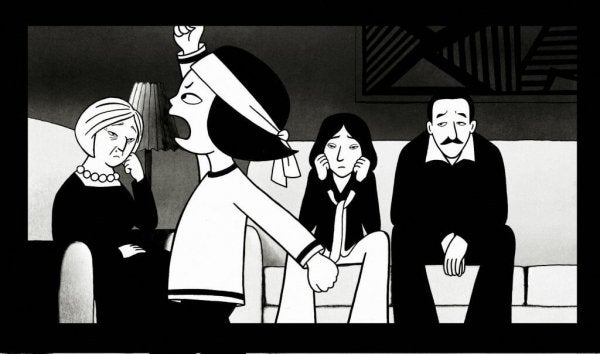 There is a pretty clear tendency in our society to ignore what happens outside Western culture and the Western world. You could almost say that, on a large scale, people in the Western world know almost nothing about the reality of other countries. For most people, anything from Western culture is “good” and is the example the whole world should be following. Marjane Satrapi captured that idea in Persepolis, her autobiographical animated film based on her graphic novel of the same name.

In the novel, Satrapi narrates what happened to her and her native Iran at the end of the 1970s. Persepolis premiered in 2007 and was well-received at the Cannes Film Festival. Marjane Satrapi grew up in a middle-class, progressive family in Iran. She was a child when the Iranian Revolution started in 1979. She was a student at the École Française de Téhéran (French High School of Teheran) in Iran and later continued her studies in Vienna.

In Europe, Eurocentrism has ruled for centuries. Europeans believe that they’re the center of the world, the origin of history and culture. “Western” isn’t just a geographical reference anymore. These days, we use the term “Western” to describe any country that has adopted a primarily European culture after colonization.

The story is told from Marjane’s point of view. Through her eyes, we learn about events that few people in the West even know about. The movie shows how Iranian society evolved, how it became the Islamic country we know today, and the consequences of war.

Although the main character is a young girl, the fact that the movie is in black and white gives it a more serious tone. As Marjane grows and the revolution advances, Persepolis becomes more dramatic and tragic. As Marjane becomes aware of what’s happening in her country, the audience realizes how little they know and how much they have yet to learn.

In the movie, we see some of humanity’s cruelty from an innocent girl’s perspective. Persepolis is an artful commentary on the danger of ideas, the pain of repression, and the ups and downs of revolution. The story shows what happened to ordinary people during these historical events, not just what happened to political and military leaders. The truth of the film is subjective. After all, the story is told from one point of view: young Marjane’s.

Discovering another reality in Persepolis

Marjane shows us a 1970s Iran that’s very different from what we might imagine. What surprises most Western viewers is that it’s very similar to any European country. Marjane’s family is progressive and they believe in revolution and the fall of the Shah. None of the women use a hijab and everyone drinks and goes to parties.

Even though Marjane has always been religious, she goes to a secular, co-ed school. Marjane’s family is well-off, so the life that she leads is probably somewhat different from the rest of the population.

At first, Marjane doesn’t understand the revolution. At school, they teach the students that God chose the Shah and she doesn’t understand why her family doesn’t support him. Her confusion leads her to research her family history. The revolution was a way to put an end to hereditary succession and promised freedom. Those who believed in it saw it as a path to freedom. However, what actually happened during the revolution and immediately after was far from what many had imagined.

The Satrapi family has a young and illiterate live-in maid. She comes from a poor family and has taken care of Marjane since she was very young. They grew up together and Marjane always feels ashamed that she can’t eat with her family. For Marjane, the revolution means the end of social classes and equality for everyone. As a child, she isn’t weighed down by her parent’s prejudices. She feels ashamed driving around in her parent’s Cadillac while other children have to work.

The revolution took an unexpected turn and became an Islamic revolution. Many Iranians feared for their life and their freedom. Thus, Marjane had to say goodbye to some relatives and friends who fled to other countries to escape the new regime. Shortly after the fall of the Shah, the secular, co-ed schools closed. In their new schools, girls were required to wear hijabs.

These changes, along with the Iran-Iraq war, make Marjane quickly lose her childhood innocence. Her parents then decided to send her to Europe to keep studying. Her privileged social position and her years in the French High School made it easier for her to get into a French school in Vienna.

Marjane struggled when she arrived in Europe. She didn’t speak the language and was fleeing from war. The most progressive students showed a certain fascination for her story, but it was superficial. They wanted to satisfy their curiosity, but they didn’t want to leave their comfortable, European bubble. At the same time, Marjane faced criticism from the more conservative faction. They were close-minded and reticent to learn about other cultures. Sometimes Marjane lied about her nationality to avoid conflict.

Marjane never fit in in Europe, so she returned to Iran. She didn’t fit in there, either. This is because she didn’t live the worst of the war and didn’t suffer what her neighbors and friends suffered. Her problems were “Westernized”. She graduated and tried to start a life in Tehran, but she never found her niche. Thus, she decided to move to Paris.

In Persepolis, Satrapi captures her perspective on the revolution and the war. She shows how difficult it was to adapt to a country where the people and the culture made it hard for her to integrate.

In Europe, she tries to find people who share her ideals. However, she finds that life there is so different from everything she knew and the same ideas take a much different form. Europeans are comfortable and their ideas are more superficial.

A story that makes us reflect

Persepolis isn’t an objective story about the Iranian revolution. It’s an autobiographical, reflective movie. It invites the viewer to think about the utter lack of awareness in the West about the rest of the world. She questions the deep-seated prejudices and ignorance of Western culture.

The story also shows the commonalities that people of many cultures share. Marjane’s parents, for example, are supposedly progressive, but they supported those who robbed them of their freedom. They also preached equality in spite of the fact that they had a maid and countless privileges.

Persepolis is a movie we can all learn something from. Just like Marjane, who forms her opinion as she moves from childish innocence to cruel reality, the viewer’s eyes open up to the rest of the world. Maybe, just maybe, the world would be a little simpler if all of us still had some of the childish innocence that we lost.