The Frenchman Paul Gauguin lived his life in quite an irregular way, painting and working on a piecework basis. Besides his friendship with Van Gogh, do you know what made him so famous? Discover the origins of Gauguin's Tahitian inspiration in this article. 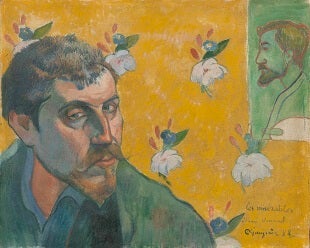 Eugene Henri Paul Gauguin, better known as Paul Gauguin, was a prominent French artist. His work has been classified as post-impressionist, synthetist, and symbolist.

As a post-impressionist artist, his work went beyond painting, as he was also a sculptor and a writer. However, his work became renowned and sought-after only after his death.

The artist is particularly known for his creative relationship with Vincent van Gogh. He also abandoned his family by opting for a self-imposed exile in Tahiti, French Polynesia.

Gauguin, famous for his bold colors, simplified forms, and strong lines, had no formal artistic training. The painter followed his own vision, going against the artistic conventions of the time. His artistic experiments influenced many avant-garde developments in the early 20th century.

He was born on June 7, 1848, in Paris, France, into a well-to-do family. His parents were Clovis Gauguin and Aline Maria Chazal. His father was a journalist.

The maternal family deserves a special mention, as his mother was the daughter of the feminist and proto-socialist leader Flora Tristan. Her maternal grandfather belonged to an influential family in Peru.

In 1849, his father’s political activities forced the family into exile, fleeing from Louis Napoleon Bonaparte. The Gauguin family left for Peru on a journey marked by tragedy, as their father died during the trip. Gauguin’s mother and her two children moved in with one of the painter’s great uncles.

He lived in the city of Lima, in the aristocratic mansion of the Tristan and Moscoso families for several years. From that time on, Spanish was his first language.

His stay in Peru marked him for life, to such an extent that he named himself the “Peruvian savage”. The family returned to France when Paul Gauguin was seven years old.

For three years, he was at the Catholic boarding school in La Chapelle-Saint-Mesmin. He started to serve as a sailor when he was 17 years old and later joined the French navy, where he served for two years.

In 1871, when he was 23 years old, he returned to Paris. He got a job as a stockbroker and became a successful businessman. At this stage, Paul Gauguin lived in prosperity.

He began painting as a hobby in 1873. He forged a great friendship with the artist Camille Pissarro, and his work attracted the interest of the impressionists.

The Impressionists were a group of revolutionary artists who challenged traditional methods and themes. However, most of them had been rejected by the academics of French art.

Gauguin was invited to exhibit his work at the group’s fourth exhibition in 1879. Thus, his work appeared alongside the works of Pissarro, Edgar Degas, Claude Monet, and other great artists.

Over time, he became disillusioned with impressionism and traditional European painting and was intrigued by the art of Africa and Asia. During that time in Europe, the art of other cultures was in vogue.

By 1889, his art had evolved into Cloisonnism after being influenced by popular art and Japanese art. That year, he produced his most famous work: The Yellow Christ.

Wanting to escape European society, Paul Gauguin traveled to Tahiti in 1891. There, he hoped to explore his creative freedom. During this period, he painted By the Sea and We Hail Thee Mary (also known as La Orana Maria), along with other paintings representing Tahitian life.

He returned to France in 1893 and painted Day of the God in 1894, in which he portrayed the Tahitian religion. Later, he moved to Punaauia, on the west coast of the island of Tahiti, in 1897. Here, he painted Where do we come from? What are we? Where are we going?

His painting The Yellow Christ is undoubtedly a key work of symbolism. It shows the crucifixion of Christ in 19th century France. For its development, he used bold lines and bright colors such as red and green in the background, which contrast with the yellow he used to depict Christ.

The painting Where do we come from? What are we? Where are we going? encompasses the existential questions that arise in the minds of human beings for which they seek spiritual answers. The painting is marked by thick brushstrokes and bright colors and experts consider it to be a masterpiece of the post-impressionist painting movement.

“Art is either plagiarism or revolution.”

By 1891, Gauguin dipped into the culture around him and managed to create truly innovative works. In La Orana Maria (We Hail You Mary), he depicted a Tahitian mother and child as the Christian figures of the Virgin Mary and Jesus.

According to several art historians, Paul Gauguin’s work was an inspiration to the painters who later developed Cubism. Pablo Picasso, in particular, admired Gauguin’s thick brushstrokes.

His personal life and legacy

At the age of 25, he married a Danish lady, Mette Sophie Gad, an amateur painter. With her, he had five children in the following 10 years. After losing his job at the stock exchange, the family moved to Denmark in 1884.

There, he tried to earn a living by working as a salesman. However, this effort wasn’t successful and his wife had to take over and become the main breadwinner of the family.

Paul Gauguin decided to abandon his wife and children and devote himself fully to painting. From this moment on, his path became a veritable procession of misfortunes and ups and downs. He also began his long list of lovers and abandoned children.

In 1886, he moved to the region of Brittany, where he came to enjoy recognition in the community of young painters. At Pont-Aven, his unrequited love for 17-year-old painter Madeleine Bernard influenced his decision to travel to Arles, invited by Van Gogh.

Living with Van Gogh resulted in one of the darkest episodes in the lives of both painters. This was when the tragic event of Van Gogh losing his ear occurred. In fact, some people believe that Gauguin may have been the trigger of Van Gogh’s madness.

He had a continuous stream of lovers. He left one of them, Juliette Huet, pregnant, and he later abandoned her.

Afterwards, he began his adventure of traveling to Panama and the French Antilles. For a brief period of time, he worked as a laborer for the Panama Canal Company.

Later, in 1887, Paul Gauguin moved to Martinique. On the island, he produced his first works impregnated with the indigenism that later led him to fame.

At this time, he had a relationship with a 13-year-old girl, Teha’amana, who was sold by her own parents. He had a daughter with her and she also served as a model for his paintings.

After abandoning her, Paul Gauguin has a multitude of lovers of similar or even younger ages. This tendency to pedophilia aroused enormous controversy.

He was continually plagued by economic precariousness at this stage of his life. His painting was neither understood nor appreciated in his time.

Before departing for Panama, he already suffered from tuberculosis, and also syphilis. Throughout his life, he suffered attacks of depression and alcohol addiction, and had even attempted suicide on one occasion.

Recently, the painter’s life was depicted in the film Gauguin, Journey to Tahiti, by Edouard Deluc. In the film, the little Indian girl who inspired several masterpieces, who in real life was only 13 years old, is played by an older actress Tuhei Adams, 17.