Vincent Van Gogh and the Power of Synesthesia in Art 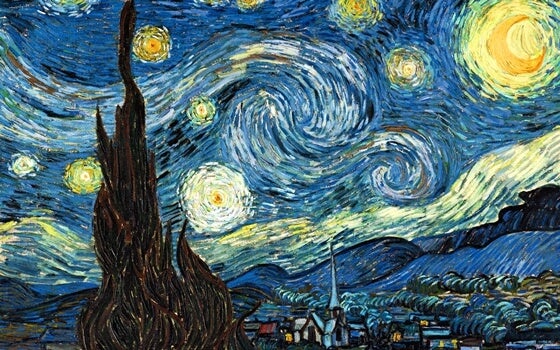 Vincent Van Gogh explained in his letters that for him, sounds had colors and that certain colors, like yellow and blue, were like fireworks for his senses. His paintings Sunflowers and The Starry Night are still palpitating canvases endowed with life and movement. It’s clear now that the famous post-impressionist genius was synesthetic.

This may be new information for many people. However, it has long been evident through the analysis of many letters that Van Gogh sent his brother Theo, or even in the analysis of his paintings. The American Synesthesia Association (ASA), for example, showed how he had”photisms” in his style. They’re a type of sensory response experienced by those with chromesthesia.

“What color is in a picture, enthusiasm is in life”
-Vincent Van Gogh-

Chromesthesia is a sensory experience where the person associates sounds with colors. The sharpest tones, for example, provoke perceiving more intense, vivid and shining colors. In turn, color can also create auditory or musical sensations.

That was what happened to Franz Liszt while composing. It was also what Van Gogh experienced, that genius halfway between madness and manic-depression. He left this world without knowing what would happen or how his creations would transcend time.

Vincent Van Gogh and the world of colors

In 1881, Vincent Van Gogh wrote a letter to his brother from The Hague. In the letter he explained that each painter had his favorite color palette, and that those favorite tonalities were a way in which the artist could go through the darkness of his heart to find light. He also commented that some painters had the majestic quality of using their hands with the virtuosity of a violinist and that certain works became pure music.

A few years later, in 1885, Van Gogh decided to study piano. However, that experience was short-lived and ended in the worst way for him. Shortly after starting the classes the artist declared that the experience of playing was overwhelming: each note evoked a color. His professor, alarmed by what he said, threw him out of the center after declaring that he was “crazy”.

It makes you smile a little. After all, the “craziness” of Vincent Van Gogh, his experiential association of chromatic sensations with music, would undoubtedly becomes his biggest gift. It is a nuance that perhaps gave his art an exceptional expressiveness and sensitive richness rarely seen until that moment.

His vigorous paint strokes, for example, gave movement to every detail. Yellow gave him an experience of joy, a jingle of that hope that Van Gogh missed so much in his life.

“When I have a terrible need of — shall I say the word — religion. Then I go out and paint the stars”
-Vincent Van Gogh-

Experiencing life differently than others

Many of his colleagues complained that his colors had nothing to do with reality. But this did not matter at all to Van Gogh. Colors were for him the expression of and the search for certain emotions and sensations.

As he explained one day to his brother, he felt unable to copy reality. His hands, his mind, his eyes never managed to agree with nature or with everything that others saw clearly. For Van Gogh, the world beat to a different rhythm; he had other perspectives, other forms that he had to shape in his own way. Because synesthesia allows a person to experience life in an almost privileged yet strange way.

Synesthesia is not a disease; we must make this clear from the beginning. It is a neurological condition where communication between the senses is unusual, in that it that allows a person to see sounds, taste colors or hear shapes.

Elisabeth Sulser is a good example. She is the only woman in the world who has all of these characteristics: she perceives colors when listening to music or any sound, and she can also taste them.

Neurologists say that when we come into the world we are all synesthetic, but as our neuronal structures mature these senses get specialized to differentiate one from the other.

Synesthesia, for example, is very common in musicians, as well as painters like Van Gogh and writers like Vladimir Nabokov. In fact, the latter explained that a large part of his family also had this gift, but he felt like they didn’t take advantage of it as much as they should have — especially because they didn’t understand it.

This was what Vincent Van Gogh himself had to experience: the sensation that the world before his eyes, before his ears, was instantaneously chaotic and disconcerting. He felt that it was just part of his madness in the eyes of the world. However, today we know that synesthesia puts a special type of glasses over a person’s eyes to see a fantastic reality.

How to Train Your Brain to Be More Creative
Are you someone who believes that being more creative is overrated? Or do you think that humanity needs great ideas? Read more »
Link copied!
Interesting Articles
Biographies
Mary Shelley: A Troubled Life

Knowing how to be patient is a true art. Whoever has developed that skill proves that they've reached a higher…

Culture
Do You Have Any of These Circadian Rhythm Sleep Disorders?

Do you know what circadian rhythm sleep disorders are? Don't worry, we will explain it here. Surely you have suffered from…

Culture
Why Does Religion Exist?

Right now, just looking at Western culture, religion is considered something private. It is something that everyone keeps for themselves. This is secularism. People can be religious, but behind closed doors. However, this…