The Stages of Alcoholism According to Jellinek

The stages of alcoholism according to Jellinek help us understand that not everyone who drinks is an alcoholic, and not all those we call alcoholics are ill. 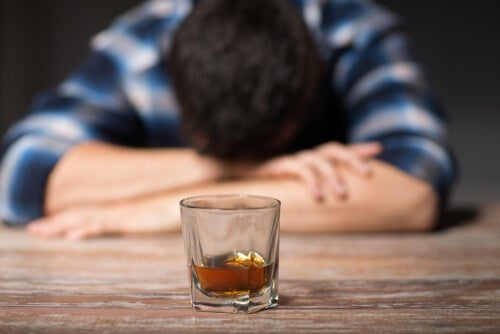 Elvin Morton Jellinek was an American physiologist and biostatistician who most consider the father of scientific studies on alcoholism. In fact, his research has contributed to a better understanding of this disease. In this article, we’ll talk about the stages of alcoholism.

Jellinek was born in New York in 1890. Between 1908 and 1910, he studied biostatistics and physiology at the Freie University of Berlin. For two years, he studied philosophy, anthropology, philology, and theology at the Joseph Fourier University in Grenoble. He also studied linguistics, cultural history, and various languages. In fact, Jellinek spoke nine languages.

In the 1930s, the physiologist worked at a hospital in Massachusetts, where he was commissioned by the Alcohol Research Council to study alcoholism. From this research, he wrote his first book in 1942, Alcohol Addiction and Chronic Alcoholism.

In 1941, he started working at Yale University and was editor-in-chief of the Quarterly Journal of studies on alcohol. Later, he was hired by the WHO as an alcoholism consultant in 1952 in Geneva. During this time, he made important contributions on alcoholism for the Expert Committee on Mental Health.

In the late 1950s, he retired from the WHO and returned to the United States. There, he worked at the Universities of Toronto, Alberta, and Stanford. In 1952, Jellinek stated that alcoholism was an illness that evolved in phases and that we could identify them with some ease.

His most famous book

His most famous book is The Disease Concept of Alcoholism (1960). In it, he describes various types of alcoholics according to different types of drinking patterns and phases.

Jellinek didn’t try to classify the largest number of people with the illness of alcoholism. Quite the opposite. He stated that those in his classification are alcoholics, but not all of them are alcoholic patients as such.

Thus, in order to consider an alcoholic ill, they must be unable to abstain and unable to control their drinking. These two factors don’t occur in all alcoholics.

The stages of alcoholism according to Jellinek

Jellinek affirmed that alcoholism develops in four distinct phases. These are pre-alcoholic, prodromal, crucial (or critical), and chronic, each with a series of characteristic symptoms. Here are the stages of alcoholism:

These are individuals who suffer from a physical or psychological illness, and their alcoholism is a consequence of this. They’re symptomatic drinkers who consume to mitigate the effects of a mental or medical disease. These are people with epilepsy, schizophrenia, paranoia, or very unsure of themselves, among other conditions.

As a result, this type of person has a continuous psychological dependence to neutralize the physical or emotional pain. In addition to this, they’re often undisciplined in their alcohol intake, often not following social rules regarding times, occasions, amounts, and the effects of drinking.

They don’t have a lack of control or an inability to abstain, nor do they have any type of withdrawal symptoms to the suppression of alcohol. However, they can evolve to gamma alcoholism.

People with beta alcoholism don’t have a real physical or psychological dependence. As a result, there are no withdrawal symptoms when they stop drinking. However, it is true that there are certain bodily repercussions due to their habit (like alcoholization) and complications like polyneuropathies, gastritis, or hepatic cirrhosis.

This type of alcoholism can lead to gamma or delta alcoholism, and there’s often a general deterioration in health and a reduced life expectancy.

We could call this periodic alcoholism or dipsomania. These are people who can abstain from drinking alcohol for long periods until, suddenly, they turn to binge drinking.

Epsilon alcoholism is associated with twilight states, semiautomatic behaviors, and amnesia. There’s also a link to epileptic or cyclothymic dysthymia.

This pattern of alcohol consumption has the following characteristics:

The defining fact here is the tendency to drunkenness. In fact, these people have a real problem controlling how much they drink, and this doesn’t usually end until the appearance of health or financial problems that prevent further drinking.

In gamma alcoholism, there are periods of daily drunkenness for weeks or months on end, along with periods of abstinence or moderate consumption. It’s common in countries where liquor is drunk, such as the United States and Great Britain, and, as a result, it’s often called Anglo-Saxon alcoholism.

In this type of alcoholism, there’s an evident tolerance of alcohol, along with physical dependence and withdrawal syndrome. It’s characterized by a high volume of daily alcohol consumption, but without intoxication, and without compulsion to exceed the amount.

There aren’t usually any changes to the person’s capacity to control the amount of drink they consume. This type has the characteristics of gamma, with the added inability to abstain.

However, this type of alcoholism differs from gamma in that the individual has to drink, and will always show symptoms of abstinence.

Gamma and delta drinking patterns are the only ones that experts consider to be illnesses, as they present physiological dependence, tolerance to alcohol, and withdrawal symptoms.

The stages of alcoholism according to Alonso Fernandez

In addition to Jellinek’s stages of alcoholism, we’ve found a similarity in Professor Alonso Fernandez’s classification, which we’ll now summarize.

This is a chronic alcoholic drinker who will have health problems as a result of their drinking. Any of the three previous stages can converge here.

This would be similar to Jellinek’s beta classification due to the health complications.

We’ve looked at the different stages of alcoholism, and now we need to look at treatments. The different types of treatments for alcoholism can involve interventions at various levels. Therapeutic intervention is directed at both alcohol dependence and abstinence. It includes psychotherapy, both at an individual and group level, with psychopharmacological intervention (disulfiram or naltrexone, among others).

These therapy programs are multidisciplinary, with a long-term treatment that aims to achieve satisfactory abstinence. As far as possible, they don’t only focus on the person who has an alcohol problem, but also on their family and partner.

From a cognitive-behavioral standpoint, experts assume that alcohol is a powerful reinforcer, which, in turn, depends on its historical context and current availability. However, this perspective doesn’t necessarily aim for complete abstinence for life – it all depends on the individual situation.

Psychological treatment focuses on changing behavior patterns that are directly related to alcohol use. This way, the individual has to take responsibility for their problem. In addition to this, they learn social and coping skills, as well as relapse prevention.

During the first phase, the person learns how to manage situations that may trigger their desire to drink. They will acquire this knowledge through training in social skills and preparation for change.

Later on, the therapists can work on relapse prevention. In this phase, a distinction is made between the concept of having a momentary lack of control (drinking once) and a relapse (re-establishing the drinking habit). This way, you avoid the effects of violating the abstinence.

As we can see, the treatment seeks to decrease the person’s interest in alcohol. At the same time, it increases their preference for other activities and helps them deal with situations that tend to cause them problems.

This type of therapy takes into account a dimensional continuum between substance use and abuse. Therefore, in some individuals, it may be appropriate to advocate a strategy of controlled drinking rather than complete abstinence.

It’s worth pointing out that these treatments aren’t carried out in a hospital regime, but, rather, in the person’s own environment. However, when the person decides to stop drinking and has been consuming in large quantities, then they’ll suffer from withdrawal syndrome. For this reason, it may be necessary to carry out an inpatient or outpatient detoxification first, normally with tranquilizers.

An important aspect in all of this is the support of the partner or family in the case of an outpatient detoxification, both to help with the physical symptoms and the cravings.

Self-Deception and Alcoholism
A few years ago, a fellow psychologist said she was unable to understand alcoholics and didn't understand that self-deception and alcoholism go hand in hand Read more »
Link copied!
Interesting Articles
Clinical Psychology
All about General Adaptation Syndrome