Living fully beyond sixty is possible, and the current generation of older youngsters is doing it. Discover why here! 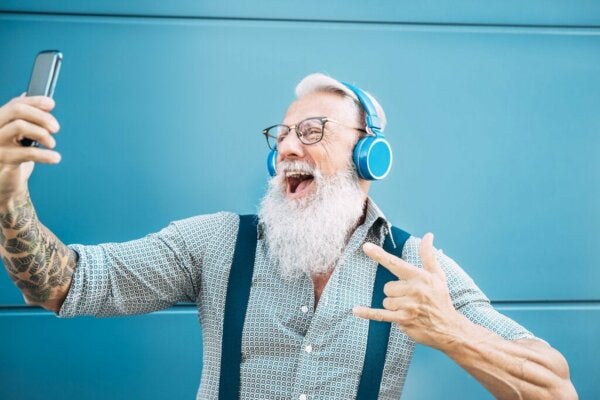 People over 60 years of age aren’t in the last stage of their lives. That’s why we shouldn’t talk about the elderly – but rather about older youngsters.

Until about forty years ago, old age started at 60. People would retire, run their morning errands, and take care of their grandchildren. It was common for married couples to gradually stop going out and abandon themselves to home comforts and TV. Nowadays, however, there’s been a huge shift in the way older adults go about their lives.

In the old days, elderly men would proudly display their gray hairs, and elderly women didn’t wear pants or make-up. Their style consisted of dark and neutral colors which are commonly associated with death or mourning and conveyed a sense of decay: brown, black, gray, navy blue… Design and fashion were completely besides the point. Instead, austerity was key.

If an older person used jeans or sneakers, then they were “trying to pretend they were younger”. If an older woman wore make-up or heels, she was seen as out of place, or even worse, as trying to compete with her own daughter. How dare she use bold colors and flattering clothes? Furthermore, in the press, people over 60 or 65 were referred to as “elderly people”.

Luckily, times have changed. These days, old age is seen differently, and those “elderly” 55 to 70 year-olds are almost extinct. People over 60 are no longer old. In fact, many find that 60 is the perfect time to be young again.

These “older youngsters” refuse to abandon the center stage in their professional, personal, and social lives. Instead, their life experience and free time allows them to move on to new endeavors. They’re happy to take on new challenges, start new projects or companies, or even go back to college.

With an average of 20 to 25 active years ahead, people over sixty can now enjoy a new perspective on life, where projects, love, sexuality, work, pleasure and enjoyment, and being aware of their personal strengths are key.

This generation has become aware of the importance of physical health. That’s why they exercise and play sports three or four times a week, they go jogging, or, at least, they try to walk for at least 30 minutes per day. But they can also be found at the gym, toning their abs or their glutes. On the other hand, healthy, low cholesterol diets are increasingly popular among them, making them live longer.

Older youngsters belong to a generation that was brought up with very different social norms to the ones we have today. They lived in a society where roles were rigidly established, and both fear of others’ opinion and moral prejudice were the order of the day. Still, they’ve been brave enough to break away from these structures and carve out new roles for themselves.

They’re tech migrants. They’ve had to learn how to use new technologies, from cell phones to computers and smartphones. This is worthy of admiration, because they aren’t digital natives. Most likely, they learned to count with an abacus in First Grade. Thus, they’ve had to go the extra mile to adapt.

Besides this, progress in medical science means that not only is their life expectancy higher, but their quality of life is also better. Longevity is a result of medical, pharmaceutical, and technical progress, which makes it possible to prevent, detect, and cure diseases on time.

Furthermore, it’s also possible to retain a youthful appearance: plastic surgery makes it possible to have a flat stomach, perky breasts, or tight and youthful eyelids, while botox treatments stop the appearance of wrinkles and improves skin tone. Anti-aging creams and hair coloring treatments are also very popular among men and women alike. And, unlike the old days, their clothes are no longer austere and dark. It’s not so strange, either, to see an older person getting a tattoo. Therefore, in general, their style is very different from past generations.

In addition, older people who are single, divorced, or widowed have entered the love market and their love lives are increasingly important to them. When they look in the mirror, they like to feel sexy, and they like to flirt when they interact with others.

Sexuality and active life after 60

For a few years, sildenafil, more commonly known as Viagra, has revolutionized the sex lives of  people beyond 60, and it’s made it possible for many people to rekindle passion and find love. Couples and, therefore, family life, is also evolving: till death do us part becomes, rather, till life do us part. On the other hand, longevity entails having more time to engage in a romantic relationship, but also more risks.

Older youngsters don’t think about retiring for a second. What’s more, they plainly reject that idea. They have no desire in becoming part of the “passive class” of society. Instead, many of them turn to study in order to stay active. While some of them find a new hobby, many begin a new degree, perhaps turning to their unfulfilled dreams. This way, they feel active, useful, motivated, and find a new sense of joy in living.

Older youngsters: full of life, but often surrounded by prejudice

Despite all of the above, prejudice often means that older youngsters’ behaviors are seen as a way to deny the passage of time. People might consider an older man with tattoos simply ridiculous. Granted, these labels respond to social mandates and prejudiced thoughts about what each life stage should look like. However, nothing could be further from the truth for older youngsters.

Behind a youthful appearance lies a more intelligent approach to life, as life experience can pair up with a body that still has a lot of energy in it! However, not all people over sixty feel young. Some studies point out that older youngsters are easier to spot in more densely populated urban areas, which typically have more opportunities for development, people to see, and stimulating things to do.

Older youngsters are building a unique generational view. It’s definitely possible to be optimistic and have a positive, energetic, and dynamic attitude towards life, even while being aware of physical limitations. Therefore, it’s all a question of attitude: taking the bull by the horns and building the life they want. That’s the question they ask themselves – how do I want to live the next twenty years of my life?

Optimism and a positive outlook on life creates beneficial neurotransmitters, such as serotonin and endorphines. Outdoor living and sports produce BDNF, the neurotrophic factor that protects the production of braincells. Intellectual and physical activity produce and increase neuroplasticity.

Furthermore, it’s important to note that longevity has also created a new life cycle: the Fourth Age. This new conception has resulted in having to rethink the entirety of our life cycles. Understanding that life isn’t over at 60 has had a deep impact in the way we see adulthood. For example, the age at which people settle into a serious relationship or have children has changed. In turn, this affects how we define adolescence. In other words, our lives have changed as a whole.

However, it isn’t just about physical survival in terms of age, but about the quality of life that people can have throughout those years. What would be the point of experiencing decrepit, old age for a long time? It seems that this generation of older youngsters has instituted their own culture and philosophy, promising younger generations – those who are in their 30’s, 40’s and 50’s – a brighter future, a more positive look on life, and, above all, a better quality of life.

Don’t Let the Past Stop You from Starting New Relationships
Why shouldn't you let past experiences prevent you from starting new relationships? How do changing expectations affect couples today? Read more »