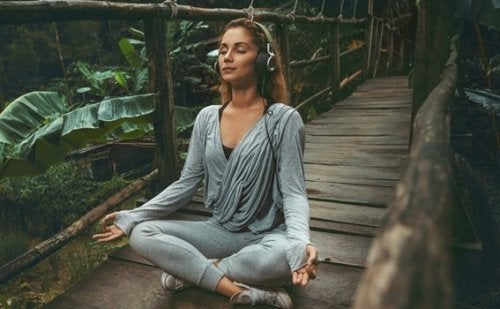 Serotonin is a neurotransmitter that our neurons produce in order to communicate amongst themselves. It’s in different parts of our central nervous system. This substance acts as a mood stabilizer. It also regulates and balances our appetite and sleep cycles, among other things.

Serotonin also plays an important role when it comes to sexuality, temperature, and pain. According to some studies, there are natural ways to raise serotonin levels. This, in turn, could improve mood and social functioning in healthy people. Let’s delve deeper into this.

The first habit that generates serotonin is healthy eating. However, it’s not enough to just eat fruits and veggies.

In fact, fermented foods and drinks greatly aid digestion and the assimilation of the nutrients needed to generate this hormone.

Additionally, we recommend any food that has tryptophan. Now, you do have to pay attention to the carbohydrates, because those can cause mood destabilization. They raise tryptophan levels but can lead to a crash later.

Another often recommended habit that generates serotonin is listening to classical music. According to Dr. Joel Robertson, Bach’s compositions are especially good choices. They have a certain mathematical order to them that stimulates the brain into a harmonious state. He also recommends Chopin, Handel, and Haydn.

The third recommended habit is to get some sun early in the day. Vitamin D is essential, performing a fundamental role in our health. It raises serotonin levels and helps us get good rest.

Prolonged stress can produce adrenaline and cortisol. These two hormones interfere with serotonin. This can happen when we get overwhelmed at work or are concerned about a particular problem that you keep thinking about.

Chronic stress is the mortal enemy of well-being. Change your lifestyle and find ways to relax during the week, and you’ll see a difference. Live in peace, not stress.

Another habit to effectively generate serotonin is developing a workout routine. It’s not a myth that exercise makes you happy. It’s been demonstrated that sweat raises the production and re-uptake of this neurotransmitter. The most effective activities to get your cardiovascular system working are running, swimming, or dancing.

Additionally, physical activity also raises levels of tryptophan, which, as we mentioned earlier, is a core component of serotonin. This produces an effect in the brain that lingers even after you’re finished exercising.

However, combining physical exercise with mental relaxation is the best option. To do this, take a walk through the woods or swim in the ocean.

“Happiness depends more on the inward disposition of mind than on outward circumstances.”

Practicing positivity is another key to generating serotonin. Optimistic thinking is central to good health and well-being. It plays an important role in managing daily stress as well.

Positivity is fundamental when it comes to raising serotonin levels. Even recalling good memories can increase its production. However, there are many other tools you can use for this purpose as well.

Alcohol is a central nervous system depressant. Therefore, it’s related to low energy levels, sour moods, and depression. In fact, according to the latest studies, alcohol consumption is related to lower serotonin levels.

Massages are wonderful ways to reduce stress, pain, and muscular tension. In addition, they’re a marvelous tool for promoting happiness, health, and well-being.

A massage raises serotonin levels by 28% and dopamine levels by 31%. On the other hand, it lowers cortisol levels (the stress hormone).

The final habit to raise serotonin levels is meditation. Overthinking things isn’t just a distracting habit. It can also have a negative effect on our spiritual development and happiness. Above all, it leads to complaints and negativity.

Some recent studies have shown that practicing mindfulness produces an increase in serotonin levels in our brains.

As always, the habits on this list aren’t the only ones that could help you raise your serotonin levels. However, these are the ones that have been shown to be the most effective. Try whichever one appeals to you the most. You’ll see your mood improve in no time at all.

We’re sure you’ve heard of kung fu, the ancient martial art of self-defense, but have you ever heard of cane…

Healthy Habits
Creating a Vegetable Garden at Home during Lockdown

During this confinement, many people have decided to try home gardening and create a vegetable garden. Now, there are small…

We know that having a healthy self-esteem is the best foundation for a well-functioning mind. However, society and its computer-retouched…

Healthy Habits
Your Brain Will Thank You for Eating Healthy

The greatest link between your body and the food you eat is not your digestive system, but your brain. Your diet…