Researchers found that physical contact has many health benefits. For one, it increases your power of persuasion and sympathy. Also, it brings people emotionally closer. 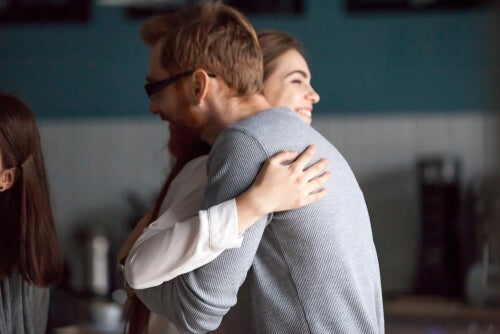 The countless studies on the health benefits of physical contact basically came to the same conclusion. They found that touching is key to well-being. No wonder it’s the most developed sense from the moment a person is born!

Unfortunately, this culture seems to invite you to do just the opposite, especially in denser cities. It seems that any contact is either suspicious or annoying. You mainly connect with others remotely, through a device. But society is slowly losing the valuable health benefits of physical contact, and yet people wonder why there’s so much psychological discomfort in the world.

“Sometimes, reaching out and taking someone’s hand is the beginning of a journey. At other times, it is allowing another to take yours.”

The skin is literally an extension of the human nervous system. Therefore, tactile perceptions almost automatically translate into physiological states of the brain. Skin-to-skin contact affects your well-being and is a valuable source of mental health. Continue reading to find out more!

Good health, one of the benefits of physical contact

Science verified that the skin emits a signal to the brain after a friendly touch. The main effect of this is a reduction in the production of cortisol, the stress hormone. It, in turn, disinhibits the production of lymphocytes, which are the immune system’s first line of defense.

Likewise, studies found that another benefit of physical contact is that it increases the production of serotonin, dopamine, and oxytocin. All these hormones play an important role in well-being.

For example, there’s a study in women who frequently suffered from migraines. Some of them were given a simple massage. All those who had access to physical contact noticed that their pain decreased. In another investigation, an electric shock was applied to some volunteers; it wasn’t as intense in those who took their significant other’s hand.

Dr. Nicolas Gueguen, from Université Bretagne Sud, studied the health benefits of physical contact in detail. He was able to verify through his experiments that giving a subtle touch to the upper arm of a person greatly increases their chances of accepting another person’s requests.

Research also verified that, for example, waitresses get better tips when they establish that kind of physical contact with customers. Science refers to it as “the Midas touch“. Likewise, another study found that people were more willing to give a cigarette to those who asked for it if the person who asked touched their upper arm.

In another study, researchers proposed a false street survey. The results indicated that only 40% of passers-by were willing to respond when there was no physical contact. Similarly, the percentage went up to 70% when they introduced a subtle touch.

The bond with others becomes closer

In other investigations, physical contact was found to activate the cerebral cortex area. This region plays a role in feelings of conformity and trust. The conclusion from these results was that humans perceive those who relate through touch as more honest and trustworthy.

One of the experiments tested the value of physical contact in a different way. They deliberately left piles of garbage scattered on the street. Someone was there asking passersby to help them pick up the waste. 63% agreed to provide aid. However, the proportion rose to 93% when the person doing the asking introduced a contact gesture.

People feel more sympathy for those who establish physical contact with them. In France, users rated vendors who shook hands or patted their shoulders a lot higher than those who didn’t. Of course, the results vary depending on the culture.

Sexologist Javier Sánchez studied self-touch. He found that there are strong prohibitions, especially on girls, to touch their own genitals. This has an effect on their adult life: many feel as if their own sexuality doesn’t belong to them.

In the case of men, families often repress and even punish tactile expressions of affection. Many times, they urge them to “be tough” and not feel what touches their skin. Otherwise, the world around them classifies as fragile and lass than manly. This is the reason why many men find it difficult to touch others.

Do you know how to communicate through touch?

Emotional Distance: More than Just Physical
Sometimes distance isn't measured in miles. Sometimes it's not between bodies, but between souls. I could be physically close to you but feel far away. Read more »
Link copied!
Interesting Articles
Friendships
Friendships - How They Develop Over a Lifetime

Friendships play a fundamental role in our lives. We all want to have emotionally significant relationships with people we can trust.…