Atelophobia: The Fear of Imperfection

Although it's similar to perfectionism, atelophobia is an actual mental condition characterized by the fear of imperfection and not being good enough. Learn more about it in this article! 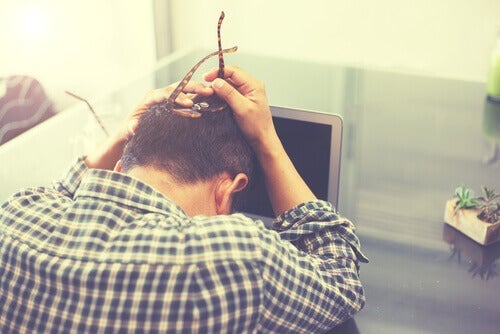 Perfectionism is something people often consider more of a strength than a weakness. But can that constant desire for perfection become unhealthy and irrational? The simple answer is yes. Atelophobia is when perfectionism starts to paralyze you.

Atelophobia is the fear of imperfection, doing something wrong, and not being good enough. It’s when your expectations don’t line up with reality. Basically, it’s an irrational, obsessive form of perfectionism that can paralyze you and cause countless stress-related health problems.

People with atelophobia can never reach the standards they set for themselves. This condition also seriously impacts their relationships. When they realize they haven’t achieved their goals, they tend to be overcome by negative emotions.

Atelophobia makes you terrified of messing up and making mistakes without even realizing it. Even the simplest of tasks can torture you because you use up many of your resources monitoring yourself. This leads you to take very few risks or none at all.

Many psychological symptoms accompany atelophobia, such as avoidance, feeling powerless, anxiety, intense fear, fear of losing control, confusion, irritability, and an inability to focus. There are potential physical symptoms too, such as rapid breathing, dry mouth, heart palpitations, nausea, headaches, and excessive sweating.

No one knows exactly what causes atelophobia. It could have a genetic origin or stem from a traumatic event. What we do know is that, in the majority of cases, it’s the result of a learned response from an early age. As the years go by, it gets worse and becomes chronic.

Atelophobia is a specific phobia centered on non-social factors. Specific phobias tend to stem from childhood trauma and are often related to physical harm.

A person’s upbringing can also play an important role. We’re talking about things such as warnings from parents about a direct threat.

Researchers also think that genetics and hereditary factors might play a role in specific phobias, especially those that are linked to the threat of physical harm. They believe that some people have a genetic predisposition to go into their “fight or flight” response more quickly than others.

One thing that’s true of all phobias is that certain experiences and information can reinforce or worsen a fear. For example, that could happen if you see a friend or family member impacted by it. In more extreme cases, indirect exposure could be as distant as hearing something in a conversation or just learning about a piece of news.

Like most phobias, atelophobia stems from a subconscious overprotection mechanism. It can also come from unresolved emotional conflict, like many other phobias. Parents who demand perfectionism and strict teachers are sometimes the root causes of future mental disorders, including the fear of not being good enough.

The Difference between Atelophobia and Perfectionism

Atelophobia and perfectionism have a lot in common, but they’re not the same. There’s one major difference between them. It’s true that people with atelophobia make perfection their goal, a goal they never reach because it’s impossible. But atelophobia is about more than just setting high standards for yourself.

The real problem is that it’s paralyzing, not motivating. Most perfectionists respond to their stress by working harder. People with atelophobia, on the other hand, do nothing to avoid making any mistakes.

Perfectionism can also be a side effect of a person’s desire to be successful. Although it has its issues, it can sometimes help a person become better and be more successful.

Learning to work hard and be “good enough” generally leads to wellness. Journalist Olga Khazan has written about this: “It can be hard, in our culture, to force yourself to settle for “good enough”. But when it comes to happiness and satisfaction, “good enough” isn’t just good—it’s perfect“.

But when it comes to atelophobia, perfection is a threat that’s hard to get away from. It tends to paralyze you and stop you from making any attempt to reach your goals. Not only do your standards lead to frustration, but they’re also very destructive for your self-esteem. They just end up overwhelming you and making you feel trapped.

Being Paralyzed by Fear: Why it Happens
Have you ever been paralyzed by fear in the face of a shock or a threat? Discover why this happens in our interesting article! Read more »
Link copied!
Interesting Articles
Clinical Psychology
Food Phobias Aren't Due to Fear of Gaining Weight