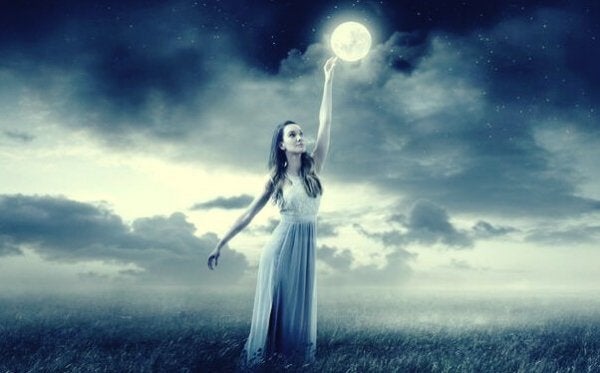 Humans have been talking about the influence of the moon on emotions since the dawn of time. It came up all the time in the Ancient world and Middle Ages. Today, American researcher Mark Filippi has taken the subject back up — this time from a neuroscience perspective.

Mark Fillipi also took a lot of his inspiration from other researchers, like Irving Dardik, Joel Robertson, and David Goodman. He has theorized that there’s a clear relationship between lunar cycles and human moods.

He uses a method called the “somatic method” and inferred some interesting things from it. He says that the different phases of the moon affect our brain’s production of neurotransmitters. In short, each different phase changes the way we produce these substances, and that’s why they change our mood.

This New York-based researcher also says there’s a link between our internal biological cycles and the cycles in the external world. In his words: “Not all Thursdays are the same, even if you do the exact same things.”

He’s talking about how what happens in the physical universe also influences us, our emotions and actions. Now we’re going to explain exactly what relationship Mark Filippi sees between the moon and our feelings.

The first phase of the moon: the first quarter

The first phase of the moon is the one where it just starts to be visible in the sky. This phase lasts around around a week, and the moon gets bigger and bigger as the days go by. It starts to grow, which is why they use the word “waxing” for the early phases. They call it a “quarter” because it’s the first of the four phases.

According to Mark Filippi, this is the phase where people become more and more sensitive. We also become more receptive to other people, and make more of an effort to find company. We have a lot of energy, but not much focus. It’s a time of inspiration, but it’s not very good for detail-oriented work.

Filippi says that all these changes come from the fact that this lunar phase increases our acetylcholine production. It’s a neurotransmitter that plays a part in memory, pain perception, learning, and REM sleep. He also says that other neurotransmitters are at lower levels during this phase.

The influence of the full moon

The moon starts to become bigger in the sky, almost like it’s “filling up.” Now it’s a full moon. During this phase, the whole circle is complete, and it’s generally brighter than normal.

According to Mark Filippi, this is the phase where serotonin takes over. That leads to more energy, creativity, and concentration. That also makes it great time to look inward and try to find answers to internal questions. We get more of a feeling of fulfillment and satisfaction, but we’re also more likely to fantasize.

Once the moon has finished the full moon phase, it starts do a reverse version of the process. Instead of growing, it starts to get smaller, it “wanes.” Every night you see less of it in the sky. This is the phase we call the “last quarter.”

Mark Filippi says that the last quarter is dopamine phase. Dopamine is the neurotransmitter linked to pleasure and enjoyment. That’s why this is the best time to do social activities. You’ll have a much better understanding of people during this phase.

We call the last phase the “new moon.” It’s the part where the moon starts at half its size and gets smaller and smaller until it disappears from the sky. According to Mark Filippi’s theory, this is the hardest phase of the month for us.

The big neurotransmitter during this phase is noradrenaline. Noradrenaline puts you in a much more defensive attitude towards everything. It makes us more vulnerable to fear than other times, and more irritable too. It’s also the phase where we’re the most nervous and insecure. We make decisions during this phase because we’re usually eager to solve things during it.

Mark Filiippi’s theory has become popular, and other scientists agree with it too. But we still can’t look at it as a completely valid theory. His ideas come from very detailed, empirical observation, but there are still some things left to explain about the relationship between the phases of the moon and neurotransmitters.

Neuroscience: A Way to Understand How the Mind Acts
The goal of neuroscience has traditionally been to understand how the nervous system functions. Both functionally and structurally, this discipline wants to know how the brain is organized. Read more »
Link copied!
Interesting Articles
Wellness
Pride Is the Origin of Many Conflicts

Because there are no definitive categories or absolute definitions in life, there are multiple ways to look at pride. Psychology…

Wellness
How to Trick Your Brain into Being Happy

Did you know you can trick your brain into being happy? It's true! Happiness is an emotion that we can almost induce,…

Wellness
4 Ways to Promote Self Awareness in Children

Helping children get to know themselves, understand their emotions and assess their attitudes lays the foundation for emotional health throughout their lives. Self awareness…

"Anybody can become angry, that is easy - but to be angry with the right person, and to the right…

Wellness
How Can I Help My Child If He Has Depression?

Children can suffer depression just like adults can. It is perfectly normal for our children to tell us or show…