Neural Language Network Models: What Are They?

Our left brain hemisphere is responsible for producing language. However, does that mean that only one part of the brain is in charge of this ability? Find out here! 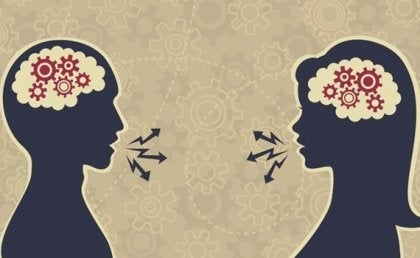 Language is a great instrument that humans use to think and communicate with one another and multiple areas of the brain represent it. That being said, brain injuries that affect these regions can cause language disorders. This explains why, for a long time, plenty of authors have been interested in studying neural language network models.

Some functions of the brain, including language, don’t only occur in one area of the brain. For language to occur, a whole group of cortical and subcortical areas work together. Each of these areas contributes to the final result, which is the production and development of language.

Thus, an injury to only one component has the power to affect the whole system. The dominant hemisphere (the left) contains the main component of language. Thus, in terms of neural language network models, we can distinguish between ancient and new. Let’s expand on this a bit more.

In 1836, a French doctor named Marc Dax shared his scientific work on the relationship between patients with aphasias and injuries in the left hemisphere of the brain. He concluded that language was, in fact, lateralized (left hemisphere).

A little later, anatomist, doctor, and anthropologist Paul Broca made a great contribution to this field. This doctor presented a patient with injuries to the frontal lobe of the left hemisphere. As a consequence, the patient presented problems in the production of language.

Likewise, Wernicke was another neurologist who was recognized for his work in developing neural language network models. In 1874, this neurologist and psychiatrist discovered a relationship between injuries to the first left temporal gyrus (Wernicke’s area) and the loss of language understanding.

A few years later, American neurologist Norman Geschwind proposed a neo-connectionist model. On one hand, this scientist proposed that the linguistic ability to name objects involved the confluence of semantic representations of various modalities. In addition, he observed that the lower parietal lobe had properties unique to the human species. He concluded that the foundation of the ability to name objects was in the lower parietal lobe.

As research progressed, it became clearer that language is a very complex system. The classical model focused on Broca’s area, Wernicke’s area, the angular gyrus, and the arcuate fasciculus. On the other hand, current models include language processing at different levels and according to currents organized in “routes”.

This model consists of an input (ventral route) and an output (dorsal route). Basically, the ventral route is in charge of:

In turn, the output or dorsal route would consist of:

The functional neuroanatomy of language

Additionally, language isn’t just found in one lobe of the brain but in several. That means that each lobe records the information in different regions following a gradient structure. Basically, phonological information is recorded in the dorsal areas, while syntactic information and semantic representations in the most ventral part.

Moreover, the temporal lobe is responsible for storing new words and retrieving them. The parietal lobe is responsible for the most analytical processing. Meanwhile, the frontal lobe has an important synthesizing function. In other words, it’s in charge of expression and understanding. Finally, we must mention that aphasia is when an alteration occurs in the ability to use previously acquired language.

In conclusion, it seems clear that, although language is lateralized in the left hemisphere, several parts of the brain work together to produce, develop, and understand it. The result (language) occurs thanks to the integration of several areas, which are all key to its correct production and comprehension.

The Left-Handed Brain: Difference and Advantages
In a right-handed world, the left-handed brain has to make a number of adaptations. Find out the advantages and disadvantages for left-handed people. Read more »
Link copied!
Interesting Articles
Culture
Three Absolute Truths about Life

A person with an intellectual disability has fewer or less developed cognitive resources than what is normal for their age.…

Life specializes in putting you against the ropes. Yes, we're talking about problems that all of us have. Sometimes they're…

The words that Isabel Allende spoke and that we've gathered here, are full of passion and commitment. The same goes…