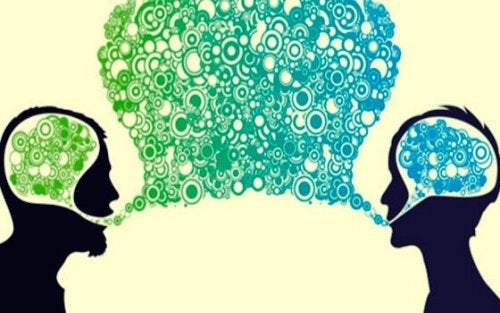 Language comprehension is the human ability to process and understand written and spoken language. This ability has been significant over the course of our evolution. The ability to communicate in an effective way allows us to collaborate and create complex societies. In these societies, we are able to confront a hostile world. That’s why we find biologically rooted structures in the brain that, like Wernicke’s Area.

One key aspect of the neural disposition of language is lateralization. That means that we find the vast majority of brain structures related to language in the left hemisphere. That being said, there are some studies that show that processes like jokes, pragmatism, and sarcasm come from the right hemisphere. But Wernicke’s Area, which is responsible for language comprehension, is located in the left hemisphere. Specifically, it is found in zones 21 and 22, according to Brodmann’s Areas.

In this article, we will talk about two aspects that are fundamental to understanding Wernicke’s Area and language. The first will be its anatomical and functional aspects. The second will be about Wernicke’s aphasia, which happens when there is an injury to the area.

Anatomy and functionality of Wernicke’s Area

Brodmann’s zones 21 and 22 make up the neuralgic center of Wernicke’s Area. In addition, other structures are important for language comprehension. When we talk about the extended Wernicke’s Area, we also include zones 20, 37, 38, 39, and 40. These participate in the association of words with other types of information.

Wernicke’s area is intimately linked to the primary auditory cortex. This makes sense, considering its role in the comprehension of spoken language. On an anatomical level, it is important to point out the connections that this system has with Broca’s area. This area is responsible primarily for language comprehension. These two areas (Wernicke and Broca) are connected by a series of axonal bundles. They, in turn, form the arcuate fasciculus.

The functions of the Wernicke Area are the following:

Injury to Wernicke’s Area causes a language disorder called Wernicke’s Aphasia. Unstructured and meaningless speech characterize this disorder. Another trait of this disorder is terrible speech comprehension. However, though the message lacks meaning, the individual speaks fluidly and effortlessly. This is because speech production remains intact.

Unlike Broca’s aphasia, the patient uses a large number of functional words (the, of, before, an…) The patient uses complex verb tenses and subordinate clauses. But, they don’t use very many words with content, and the words don’t go together to make meaning. This is primarily due to an effect called semantic paralexia. This is when an individual says a different word with a similar meaning instead of the word they are looking for. That happens because Wernicke’s Area isn’t specific in selecting words through meaning.

One key aspect of Wernicke’s aphasia is that speech fluidity remains completely intact. Individuals with this disorder have no problem carrying on a conversation. However, it lacks meaning. This is because the brain structure responsible for speech production is Broca’s area. This helps us understand that Wernicke’s area specializes in language semantics and comprehension. Although this area connects to other areas, those other areas are capable of functioning independently.

Lastly, a curious thing happens when there is an injury to these language areas at a young age. Because of the great plasticity of the brain, if the left side is injured, language might develop in the right hemisphere instead. Thanks to this, brain injuries before language consolidation aren’t as significant. Someone with an early brain injury of this type could still achieve normal or practically normal development.