There are people who nag, complain, or ruminate as a way of life. Why do they do this? What lies behind these behaviors? Psychologist Marcelo Ceberio tells us about it. 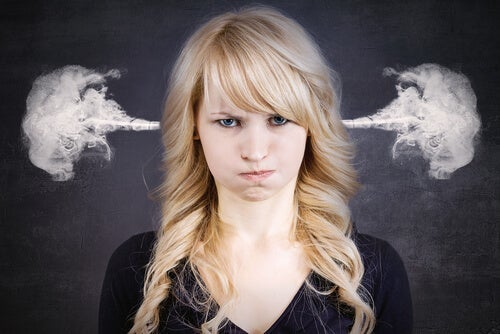 It’s quite common for people to find it easier to complain and judge other people’s actions but turn a blind eye on their own. Now, what do they complain about? What or who do they judge? Why do they like criticizing others so much? Let’s be real, what’s the point of doing so?

Usually, the tendency to criticize and complain are part of very structured inertia that’s part of a lifestyle where we can discern between different variants:

In general, these attitudes arise out of the blue. Those who are used to being this way don’t even know it; they’re incredibly used to this system, to the point where they’re not even aware of their thoughts.

As a matter of fact, part of their way of thinking comes from self-fulfilling prophecies. By this, we refer to situations that end up coming to life thanks to the negative attitude they have toward their surroundings and even themselves. In the end, the situations that prove their negative ideas are all products of the mind games they themselves play.

Let’s think of a hypothetical scenario. Imagine that you think and think and think that a job interview will go badly. You’re sure you’re going to embarrass yourself and that the interviewer won’t think you’re right for the job. Of course, with that mindset, you’re going to be extremely nervous, stressed, and anxious upon walking in. As a consequence, it’s more than likely that you won’t get the job in the end. And the worst part about it is that you’ll probably think you had nothing to do with it.

It’s even worse if someone with this profile (naggers, complainers, and ruminants) suffers from another disorder. This, as a result, will end in serious issues, as the individual discomfort will be great.

It doesn’t matter if it’s a simple or a complex disability. You could have a headache, feel panic, an eating disorder, or gastrointestinal spasms. In the end, it doesn’t matter. Complaining will for sure increase your discomfort.

Making up a “complaining script” in your head

More often than not, these three styles (naggers, complainers, and ruminants) go along with a mental script. In other words, a prototype of situations that cause some level of discomfort. The whole point of these negative scenarios is putting the individual to complain or criticize (either themselves or others).

In fact, many of the subjects that follow these three attitudes have a hard time solving their mental script. The reason for this is that they run out of text to develop any of them. As a result, they resist changing problematic situations. In the end, what would they do if they couldn’t criticize or complain when it’s basically all they know? They basically perpetuate their problems to maintain their attitude.

However, naggers, complainers, and ruminants aren’t all the same. There are a number of differences between them that are worth considering:

As you can see, naggers, complainers, and ruminants are usually able to identify flaws in everything they see or do. They notice all details no matter how small they are. It’s as if remaining calm made them uncomfortable. Oddly enough, they’ll always find a way to look down on things and people.

We must mention an important detail. Naggers have the tendency to be envious. Now, envy is a dark and disqualifying feeling that operates through criticism. Believe it or not, it’s so powerful that it’s able to detract the interlocutor from any progress or achievement. These people can turn against a friend just because they have something they lack.

Naggers, complainers, and ruminants usually face the option of observing a glass half full or half empty. Of course, they specialize in seeing the glass half empty. Even if they have the opportunity to see the positive side of things, they choose not to. They find shelter in attitudes of criticism and complaint with the aim of highlighting the things that could’ve been done and not those that were done.

However, this isn’t about not considering the negative aspect of things or what’s missing. Only by paying attention to your inner self will you be able to better yourself, rectify mistakes, and improve your results. In this case, we refer, in particular, to pointing out the negative through the predominance of the complaint and criticism and, thus, making change quite an impossible thing to achieve.

Complaining is a mechanism that obstructs the possibility of modifying an action and making it better. Those who choose to complain and criticize oftentimes get too carried away when it comes to any issue. This, as a consequence, makes them frustrated and leads them to move further and further away from the real solutions.

There’s something else that adds up to their frustration. We’re talking about their desire to always pinpoint what’s missing. It’s as if it were never enough. No matter what they do, they always could’ve been done a little bit better.

Moreover, there’s an important factor present in complaints: inaction. Complainers usually criticize themselves but do nothing to change. All their energy goes toward complaining and judging themselves or what’s around them. Thus, by not taking concrete actions that translate into solutions, there’s a huge blockage that favors complaints. This way, they form a seemingly never-ending vicious cycle.

As you can see, criticism and complaints are incredibly detrimental to an individual’s self-esteem. It’s only a matter of time until people start drifting apart from them. In the end, nobody likes to surround themselves with people who permanently point out what wasn’t done, what’s missing, or the error in everything.

On the other hand, it’s true that giving constructive criticism is hard as well. After all, criticism is used to point out what’s missing and disqualify. However, not only the content of the criticism is important but also the way the person states it. The tone, cadence, facial expressions, hand movements, and general bodily expression are vital in this aspect.

It seems as if complainers have one goal: to create rejection from others. In fact, many complainers use criticism to disqualify others and put themselves in a place of superiority. This comes hand-in-hand with their low self-esteem: they feel they have to do this due to their feeling of inferiority.

Many criticisms, especially those that occur in relationships (be it couple, parental, etc.) conceal requests. Basically, underneath that person’s criticism, there’s a request they want to make.

Let’s analyze this example. Imagine a teenage son yelling at his parents: “You’re never with me, you’re always taking care of other things. You never listen to me!” Sounds like a complaint, right? Well, in reality, he’s saying, “I love you. I need you to spend more time with me”. Let’s see another example. Imagine a husband tells his wife, “You always go to bed early. You never spend time with me at night!” This criticism could easily translate to, “I’d love it if you stayed up with me for a while so we could talk”.

It’s important to keep something in mind when making these kinds of requests. You must always take into account the other person’s possibilities and resources. Not doing this will result in a failed request right there and then. Everyone’s possibilities are different. Remember that the fact that you’re able to do something doesn’t mean another person can as well. Analyze how feasible your request is before making it.

Finally, when they criticize, naggers and complainers place themselves in a position higher than the other person’s. Remember that criticism oftentimes comes from a position of perfection, where people think they have the right to judge as much as they wish. This, of course, makes any interlocutor feel angry.

Making a request is different. When requesting, there are no higher and lower positions. Requests have everything to do with value. When you request, you value the other person and make them feel emotionally important. On the other hand, criticism is all about disqualification.

How to Face Manipulative Criticism
How do you handle criticism? Most people aren't very comfortable with it, and that's completely normal. Criticism can be destructive, and in some cases, Read more »
Link copied!
Interesting Articles
Personal Development
The Calimero Syndrome: Complaining as a Way of Life

Personal Development
Uncovering the Potential in Your Personal Strengths

Like every branch of science, psychology has evolved a great deal over the years. In the past, it was believed…