The Mind Is What Makes People Free or Slaves 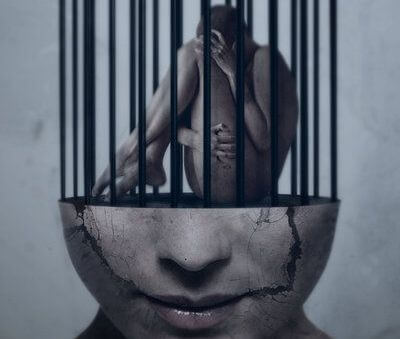 One of the greatest leaders of our time was imprisoned for more than 25 years. However, he was able to forgive and transcend the bars of his cell where he was being held. From his lips came wise words such as, “Money will not create success, freedom will.” His name is Nelson Mandela, a figure that clearly understood that the mind is what makes people free or slaves.

Mandela is an example of free thought. A man who was able to feel peace with himself despite being locked in a forced labor camp and deprived of his rights as a human being. He knew how to escape from captivity through his mind.

“If you do not have inner freedom, what other freedoms do you expect to have?”

The fable of free people or slaves

Mandela was able to find freedom in a prison, the thread of life for this great South African leader. I would like to tell you the fable of the free person and the slave so you know if you live among free people or slaves.

Imagine a medium-sized city in which two people, one at each end, of the population live. One of them is very rich and opulent and the other has a near average salary. For simplicity, we will call them the opulent gentleman and the average gentleman.

Every day, the opulent gentleman leaves the garage of his huge mansion with his expensive, spectacular car. He feels very satisfied with the car, but knows that a new, even more beautiful and expensive model has come out and can’t wait to exchange it in order to brag about the vehicle.

Meanwhile, the average gentleman leaves his communal garage that he has rented with his small apartment on his way to work. He has a medium-sized car which isn’t very expensive, but it is one he likes a lot. Somehow in it he travels with the memories of some of his first encounters with the person he loves.

The opulent gentleman gets to work with head held high, chest out and makes all his employees look away because he is very angry. He thinks he is the one who is worth something and the rest are just a bunch of lazy people who don’t know how to do anything. Today he will spend all day at the office because he thinks that without him everything goes wrong.

The average gentleman knows that unless he is struck by good luck he will never be rich, but he doesn’t care because he loves what he does. He has fun with his profession, greets his peers, and later they eat together at break time and laugh.

The opulent gentleman knows he has to work all day because he needs more money. He wants a new car, is going to expand his pool, needs to buy a new yacht and is planning to go on trip to the other end of the world.

The average gentleman will work his hours in the workplace, without any stress and unhurried. He loves knowing he’ll be leaving work soon because his wife and child are waiting for him to walk around the park and feed the birds while his little boy plays.

The opulent gentleman and the average gentleman in their personal lives

Throughout the day, the opulent gentleman only thinks about making more money. He wants everything. A better car, the most expensive trip flying in first class or on a private plane, the most spectacular pool, the best clothes…he only thinks about buying things to be envied by the city.

Average gentleman spends his days enjoying his free time with his family and friends. He strolls through the park, takes a vacation from time to time, goes out to dinner at a restaurant, enjoys reading and his life with his people and once in a while goes to the movies or the theater.

The opulent gentleman loves to pretend. He has money and wants everyone to know it. He ardently wishes to show how rich, powerful and big he is. He has succeeded in life and is dying to show the world that he is an example to follow: a winner.

The average gentleman is able to smile, be surprised and cry. We could say that he is happy because he has what he needs. The love of his family, a job he enjoys and which lets him live without stress by doing what he likes and gives him free time to devote himself to the people he loves.

In conclusion, I would like to ask a question. Who do you think is the freer person? Is it the wealthy man who has everything he could ever dream of and always wants more? Or maybe the average man who has what he needs and enjoys it every day?

Indeed, whether we are free people or slaves does not depend on how much money and possessions we have, the country we live in or our personal situation. A poor man can be happier than another man who has everything. It’s all in the mind. The more you need, the greater your slavery. You choose the moral you’d like take away from this fable.

Sometimes Loneliness Is The Price of Freedom

It is often said that better alone than in bad company and it is better a dignified solitude than trying to stay with someone who is NOT in love with us. See more

Biographies
Ramiro Calle, a Biography of a Yoga Teacher

Today's article is about the life and work of Ramiro Calle, one of the most influential yoga teachers of all…

Culture
4 Values That Govern Our Lives But Make Us Unhappy

In our interview with Jenny Moix, we’ll discover a dimension that’ll help us to be a little happier: flexibility. Being flexible means questioning many of the things we do and…

Culture
Physical Signs Someone Is Lying to You

Surely you have suspected that someone is lying to you on more than one occasion. This happens more often than…