The midbrain may be the key to finding a cure for some diseases such as Parkinson's or Alzheimer's. 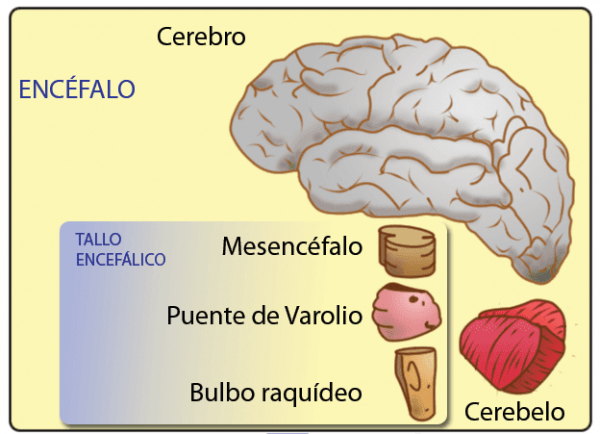 The midbrain is an essential part of the nervous system and the various functions of the human body are possible thanks to it. This is because it’s one of the brain structures that communicates with the main parts of the central nervous system.

It lives in the middle of the brain, hence the name “midbrain”. Thus, it connects the pons and the cerebellum with the diencephalon.

In addition, it’s made up of various structures, all related to motor and sensory functions. In this article, we talk about the characteristics and functions of this small but fundamental part of the brain.

The midbrain is the structure in the middle of the brain that extends from the diencephalon to the bump. In addition, its shape is similar to a trapezoid, only with a narrow base and a tiny hole that runs through it. This is known as Silvio’s hole.

Externally, one can only appreciate its anterior face. But you must lift the cerebellum to see the temporal and occipital lobes and the cerebellum.

The pons is the lower limit of the midbrain, while its upper limit is in the continuation of the nerve fibers of the optic nerve, also called optical bands. Around the frontal lobe, with the interpeduncular fossa; it reaches the pineal gland on the back.

The functions of the midbrain

The main structures of the midbrain are the tegmentum, the tectum, and the cerebral peduncles. Here’s a description of each one of them.

Located in the dorsal area of ​​the midbrain. It consists of three parts:

This means “roof” in Latin and constitutes the posterior portion of the cerebral aqueduct. Its main structures are:

These are two white nerve cords. Also, they’re separated from each other by the interpeduncular fossa. They live in the upper area of ​​the brain stem, above the annular protuberance and disappear in the hemispheres.

Their main function is to maintain communication between the midbrain and the brain. In addition, brain peduncles are made up of nerve fibers that include:

However, they’re not the same as cerebellar peduncles. The interpeduncular fossa is between them and separates them. In addition, the black substance on the dorsal and ventral side of each peduncle keeps them apart.

Various pathologies can manifest when something fails in the midbrain. This is because it’s a fundamental zone for certain processes. These are some of the consequences of a malfunction:

The midbrain is the link that connects various parts of the brain to each other. Due to the amount and complexity of inputs and outputs it has, any brain accident could damage it. This is because it’s an axis where fundamental unions for the human body converge.

Brain Plasticity: How to Achieve an Elastic Mind
Albert Einstein said that the true potential of human intelligence relied on its ability to change. Learn about the elastic mind here! Read more »
Link copied!
Interesting Articles
Brain
What's the Relationship Between Poetry and the Brain?

Your internal dialogue changes your brain. That daily conversation you have with yourself can strengthen a number of brain areas…