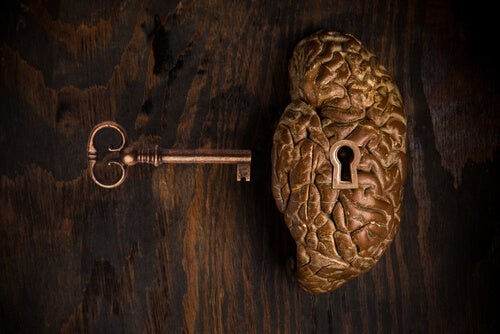 The word “close-minded” has been used in popular language for a long time. We use it to describe people who display mental rigidity, or people who don’t understand or want to understand another point of view. Or people who, just to be right, will try to convince you that you’re wrong.

Conventionally, when we talk about close-minded people, we’re referring to people who reject other people’s approaches, ideas, or perspectives, so they can remain “enclosed” in their own ideas and mental schemas. These are people who try to adapt the world to their own minds and not the other way around.

This word, among many others that have been popularized, has more depth when you look at it from a psychologist’s perspective. The word “close-minded” has different variants in psychology. We’ll focus on two of them, since their meanings are quite similar.

Mental rigidity involves a lack of flexibility and open-mindedness towards seeing ideas from different perspectives, towards withstanding criticism of something we believe in, and towards living instead of surviving. This term has been used frequently in clinical psychology as a phenomenon, a symptom, and a personality feature. Here are some examples:

The need for cognitive closure

The second definition of mental rigidity is a little twist on the idea of close-minded people. The need for cognitive closure refers to the need to eliminate the uncertainty that arises from certain thoughts and situations. This need motivates the person to find a quick answer. The greater need for closure, the more energy they’ll put into accepting that answer and defending it.

Even so, that doesn’t mean the answer is correct, true, genuine, or even healthy. But what does this have to do with close-minded people? It’s simple. Imagine that one day, ash starts to fall from the sky. Something inexplicable at first, as there’s no volcano nearby, nor is there anything else that should produce ash on such a large scale.

A close-minded person, or someone with a high need for cognitive closure, would say that it isn’t ash, it’s snow. And that’s that. They wouldn’t give it another thought. Like we said, the more need for closure, the more urgent it is to find an answer, even if it’s not true.

Now imagine a situation in which emotions are involved. Let’s say a family member has passed away. Someone with a high need for closure – and don’t forget individual differences – would try to find an answer to the great uncertainty that is death in an emphatic and possibly even more painful way. They’d channel their anger towards blaming the doctors, or they’d feel guilty over their own mistakes that they’ve made regarding their loved one.

There are many possible scenarios, but they all share the characteristic of urgency, even though urgency is no help in these situations. This is how the need for cognitive closure and close-mindedness are related: immediacy and a low tolerance for uncertainty push them to find a quick answer without actually looking for the right one.

The answer to this question has two parts. We’ve talked about mental rigidity as a type of personality feature and as the need for cognitive closure, which both fulfill a need that we all have more or less: to overcome uncertainty.

The first part of the answer involves being honest with yourself and asking yourself whether you’re trying to find explanations or give them. If you let your friends finish when they talk, if you sometimes let curiosity win over the temptation to stick with the first explanation, or if you’re able to live with unanswered questions, you’re probably far from being close-minded.

As we’ve seen, being mentally rigid or not is a personal question, so obviously it doesn’t make sense to say “I’m less rigid than you are,” because everyone determines their own scale.

On the other hand, regarding the need for closure, it must be said that despite there being scales and tests to measure it, when it comes to daily life, the reality is that we all have it. There’s nothing more human than seeking mental efficiency and avoiding the distress caused by not understanding something, even more so when emotions are involved. Who could blame the family member in the example we mentioned for their feelings towards death?

Don’t forget they key point of this article: all of this occurs on a spectrum. It’s hard to say whether somebody is “rigid” or “not rigid,” whether they “need closure” or “don’t need closure.” At the end of the day, despite being able to measure these factors, we are the only ones who can get to the bottom of our own rigidity. So maybe it’s not about being more or less rigid, but rather understanding why you are and how it can hurt you.

Carl Gustav Jung is without a doubt an essential name if we want to understand the history of psychology. His…

Psychologists characterize dissociative identity disorder by an interruption and/or discontinuity in the normal integration of conscience, memory, identity, emotions, perception,…

The Big Five personality traits or the five-factor model (FFM) is one of the most famous models that structures personality.…