Martin Luther King's quotes demonstrate the tremendous struggle this great man fought throughout his whole life. Indeed, he strove to make the world a fairer place through peaceful means. For this reason, his thoughts are well worth reading and reflecting on. 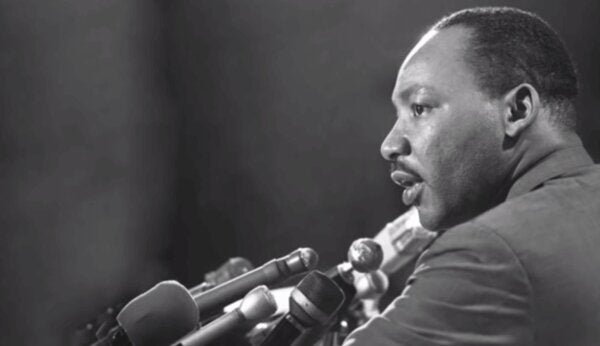 Martin Luther King’s quotes reflect the courageous and insightful man he was. He was undoubtedly one of the greatest civil rights activists. However, when you read his quotes, you realize that he was much more than that. In fact, he was a thinker, a genuine leader who practiced what he preached. Furthermore, he remained faithful to his convictions until the very end.

The most interesting and moving thing about Martin Luther King was his mix of absolute steadfastness and radical pacificism. He was an advocate of non-violence who always stood by his decisions.

“As long as there’s poverty in this world, no man can be totally rich even if he has a billion dollars.”

Martin Luther King mentioned injustice in many of his speeches. In fact, he suffered the effects of racial discrimination in his own country. This experience led him to believe that lack of justice only led to greater evils.

In this regard, he said, “Injustice anywhere is a threat to justice everywhere”. He meant that justice is a universal value. Furthermore, that it shouldn’t just be defended in certain circumstances but everywhere and at all times.

Martin Luther King led what seemed to be an impossible fight. Consequently, he knew what he was talking about when he said, “Faith is taking the first step even when you don’t see the whole staircase”.

Luther King faced an age-old problem. He fought against ideas that seemed immovable. For this reason, he knew he wouldn’t achieve his goals in the short term. That’s why he stressed the value of perseverance. In other words, you should take action, no matter how long it might take you to reach your goal.

This particular quote has never ceased to be relevant:

“The ultimate tragedy isn’t the oppression and cruelty by the bad people, but the silence over that by the good people.”

In reality, the wicked, cruel, and unjust are a minority. Most people are good. However, it’s the indifference of the good people that often allows the wicked ones to take control of everything.

4. The criterion for judging others

Judging a human being for an accidental and random circumstance is ridiculous. The fact that someone was born in a certain country or looks a certain way doesn’t tell you anything about that person. These facts are irrelevant.

However, what isn’t irrelevant is the degree to which people’s mindsets have evolved or not. That’s why Martin Luther King said, “I look to a day when people will not be judged by the color of their skin, but by the content of their character”.

5. How to increase your truth

Martin Luther King was convinced that fraternity and cooperation should form the axis of human coexistence. That’s why he said, “Your truth will increase as you know listen to the truth of others”.

When you close yourself off to anything different, or “other”, you limit your possibility of expanding your knowledge about the world. In fact, listening to and recognizing other ways of thinking and seeing reality allows you to broaden your horizons.

This is one of Martin Luther King’s most beautiful sayings. It reads, “We must accept finite disappointment, but never lose infinite hope”. It’s an inspiring statement that strengthens the spirit in difficult times.

This is a quote that tells you to keep hoping because it helps you find the strength to carry on. Therefore, if you want to succeed, you have to consider disappointment just a passing phase.

7. Martin Luther King and the cycle of violence

This quote explains that violence tends to engender a logic that then acquires a life of its own. Without a doubt, it’s impossible for something obtained with violence not to leave behind any scars or consequences. These eventually turn into grudges and revenge. Therefore, a vicious cycle begins, which can only end when justice is done.

Martin Luther King left behind many other quotes that bring messages of hope and enlightenment. In fact, everyone can learn from this man’s thoughts and life.

Martin Luther King Jr. and His Quest for Civil Rights
Martin Luther King Jr. was an inspiring man who embodied one of those humans that only come by once in a lifetime and represent the best of human beings. Read more »
Link copied!
Interesting Articles
Sayings
7 Wonderful Sayings from Emil Cioran