Assertive Indifference: What it is and how it Works 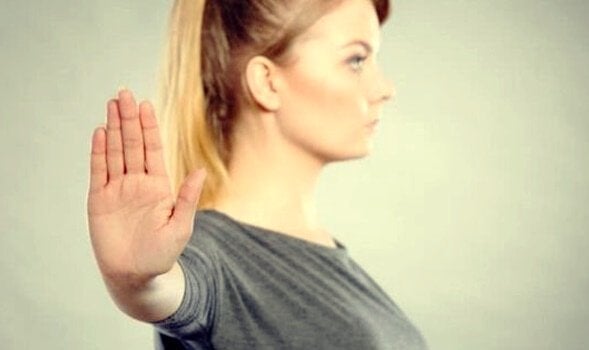 Assertive indifference is a new expression that was first used in the field of relationships. However, little by little, the concept has started to be used in other fields, and has proved to be a useful way of managing different situations.

Assertive indifference is a type of behavior that purposely blocks any type of external reaction, in any given situation. You act as if it doesn’t matter to you and doesn’t affect you in any way. It is a type of simulated behavior, because the purpose is to not reveal to the other person what you are really feeling.

“Wherever people feel safe (…), they will feel indifference.”

When people use assertive indifference what they are trying to do is not expose their real emotions to the other person. In principle it might seem like a pretense or a bit of manipulation. However, it is actually quite the opposite. The idea is to avoid showing weaknesses, so that others won’t manipulate you when there is a type of power game going on. That is why we have added the word “assertive” to this type of indifference.

Assertive indifference in your love life

Our love lives can sometimes be like a rose garden, but at other times it can feel like a battlefield too. There are often power games being played out in them. We’re not only talking about the male chauvinism that can be found all over the world. The woman too also uses her power in many situations.

In a relationship the partners often try and sound each other out. One, or both, of them wants to see how much influence he has over the other. This happens especially at the beginning of the relationship. It also happens when the relationship ends, and things are still up in the air, and one of the two wants to see what the chances are of trying again.

It’s like a kind of emotional arm wrestling, and in these cases, assertive indifference can be a good option. You pretend that you don’t feel anything for the other person, either to stop your ex-partner from manipulating you, or to prevent a relationship you finished from starting again. It is not a deception as such, but is rather a tactic to achieve a higher good.

Assertive indifference is also an appropriate response when we have constant conflicts with certain people. One example would be with a work partner that you are always having disagreements with, which always ends up leaving a bad taste in your mouth. You already know that they’re never going to change. For some reason, that person always seems to seek conflicts with you.

If you can see that dialogue is impossible, the best option that remains to you is assertive indifference. It means you not giving in to provocations, ignoring offensive comments and, ultimately, cutting yourself off from them. The objective is not to offer any sort of answer to what they are saying to you, things that only end up worsening the whole situation.

Over time, assertive indifference becomes a valid way of defusing the other person’s objectionable behavior. When they see that they are getting nowhere in the ridiculous game they are playing then, sooner or later, they’ll give up that type of behavior.

A tool to overcome situations

Assertive indifference can also be applied in our day-to-day conflicts. Differences with other people are just part of life. Most of the time such differences are really insignificant. However, sometimes they give rise to more serious confrontations. In one way or another, we constantly have to decide whether we take things further or not.

Not every conflictive situation needs us to react to it. We can also simply “let go”, and that is an important part of assertive indifference. It means that we have to judge what reaction on our part will bring greater benefits, and fewer negative consequences. Responding to the aggression of a drunk person, for example, is only valid if it really endangers something that is fundamentally good.

Assertive indifference, then, is a tool which can help us manage different conflictive situations, but in an intelligent way. Sometimes the best thing we can do is to do nothing. In fact, the option of doing nothing, when appropriate, is exactly what this whole concept aims at.

Seeking Someone Who Does Not Want To Be Found: Indifference
Read more »
Link copied!
Interesting Articles
Wellness
The Shortest Path To Happiness Starts With A Smile

Do happy people smile more, or are people who smile happier? The answer is that both are true. When we…

Wellness
When the Fear of Death Doesn't Let You Live

We're all clear on one unavoidable fact: we're all going to die some day. Nevertheless, sometimes thinking about the end…

Wellness
It's Clear That You Make Love by Talking

Wellness
Relationship Debts: When I Make Sacrifices but Expect Something in Return

We all know what debts are: payment commitments between two entities that have to be fulfilled. However, few people realize…

Wellness
Why am I Insensitive to the Suffering of Others?

Every species of animal in groups has the ability to be sensitive to the pain or suffering of its peers.…