'Cantinflas' was a kind of Latin American 'Charlot'. Mario Moreno was similar to Charlie Chaplin in other ways as well. They both contributed greatly to white humor and social criticism. But how did the famous character originate? What was Mario Moreno, his creator, really like? 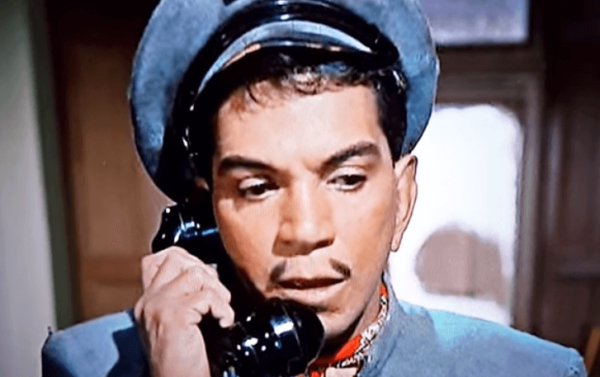 There are many similarities between Charlie Chaplin and Mario Moreno, also known as Cantinflas, both in their lives and in the style of their humor. In fact, they both lavished a very public mutual admiration of each other. We could even say that both embody the same concept, one in its English version and the other in its Latin American incarnation.

Mario Moreno, “Cantinflas”, was perhaps the most important comedian in the history of Latin America. Even his particular, often chaotic, way of using language, combining rhetoric, demagogy and words, gave rise to the verb cantinflear, which was accepted by the Royal Spanish Academy in 1990.

“The difficult I do immediately, the impossible takes a little longer.”

Words occupied a prominent place in his humor, and that’s why most of his success came with the Spanish-speaking public. He wasn’t so successful when his films were translated into other languages. In other languages, as good as the translation might be, the true meaning of his words was often lost, as was the picaresque content of his humor.

Like Charlie Chaplin, Mario Moreno came from a poor family. He had 13 siblings, but only seven of them survived at birth. He spent all his childhood in the neighborhood of Santa María la Redonda, very close to Tepito, one of the poorest and most dangerous sectors of Mexico City.

His full name was Mario Fortino Alfonso Moreno Reyes. He was born on August 12, 1911. During his childhood and at the beginning of his youth, he performed several humble jobs, such as a mailman, shoeshiner, and errand boy.

In 1928, he enlisted in the army, but lied about his age in order to enter; he was 16 and said he was 21. The lie was discovered. Consequently, he was expelled.

He also tried to become a boxer, a bullfighter, and even a dancer. In the early 1930s, he began working in the Mexican traveling theaters. There, Mario Moreno began to create and shape his iconic character Cantinflas. Around this time, he married Valentina Ivanova, with whom he stayed until her death.

The birth of Cantinflas

Although we can’t be completely certain, everything seems to indicate that the name “Cantinflas” came up during his tent theater performances.

People have said that, on one occasion, he was given the opportunity to perform a monologue. He was very nervous and forgot most of his lines. However, despite his words being rather incomprehensible, they were also extremely funny at the same time. It was from this moment that the main trait of his character was born.

Some say that this confusion of words gave rise to the expression “cantina inflas” (two words which mean “canteen” and “inflate” in English), which later became the name “Cantinflas”. However, Mario Moreno’s heirs claim that this isn’t true at all, and that the great comedian took the secret of the name’s origin to his grave.

Be that as it may, the fact of the matter is that Mario Moreno created “Cantinflas”, a character who represented the poor young men of Mexico. His mere appearance in shows made people laugh and guaranteed their success.

He often questioned those in power, and always got away with it thanks to how he played around with the Spanish language. Mexico and Latin America loved his character and its humor, as well as his sweetness and social criticism.

In Mexico, they loved Cantinflas so much that, in many elections, they voted for him without him even being a candidate. Moreno, like Chaplin, became the leader of an actors’ union. However, he didn’t achieve much in this area. Documents that came to light after his death seem to indicate that his alliance was probably with some obscure power groups.

As his success and wealth increased, his films changed, and so did he. He stopped representing poor Mexicans, and started transmitting messages in his films that, at face value, seemed to be social, but were really institutional. He also kept an unforgivable silence during the student massacre in Mexico City in 1968.

We know little about his family life, but what we do know is tinged with darkness and sadness. His own son, and one of his grandchildren, both committed suicide, his grandson in 2014 and his son in 2017. Another grandson lived on the streets as a result of his addictions. And, finally, the comedian’s third granddaughter suffered extreme domestic violence: her husband caused 200 fractures to her face.

Mario Moreno died before these terrible events took place. While he was alive, little was known about his family. He died in 1993 of lung cancer. In many ways, people still love Cantinflas, but many questions remain about just who his creator, Mario Moreno, really was.