Happiness, According to Charlie Chaplin 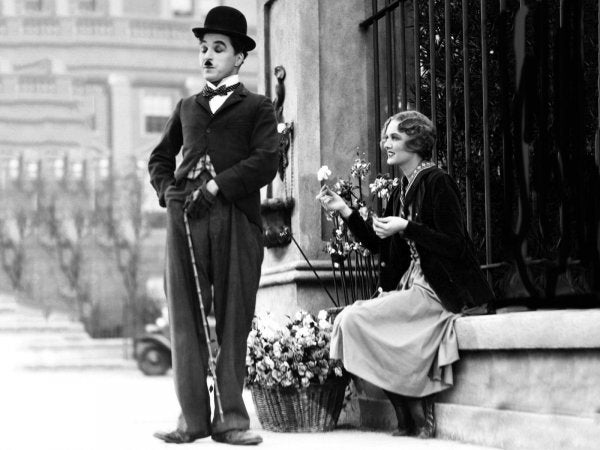 Let’s talk about happiness. Do you feel heavily burdened today? Maybe your finances aren’t so good, you’re not living in the house you always dreamed of, or people who used to make you smile so much have left your life.

But happiness doesn’t necessarily reside in the physical plane where we make most of our goals. Nor does it reside in some far away, hard-to-reach realm. It isn’t a Holy Grail you obtain upon completing a difficult personal journey. True happiness, authentic happiness, is an attitude. A vision. A way of seeing life.

That is, happiness resides in everyone. It just needs to be cultivated each and every day. It involves refocusing on the little things in life, the simple things.

You can choose a path of personal anguish where you burden yourself with negativity and give up at the first sign of trouble, or you can use that same energy to encourage more positivity in your life. Give yourself daily motivation through the simple things. Have the enthusiasm to make goals for the future and enjoy the present.

Charlie Chaplin, the legendary actor, left us with a realistic vision of happiness and how to reach it. Whether you’re a loyal fan of his, or totally unfamiliar with his work, everyone can learn a thing or two from him.

Today, we want to share with you a part of the real man that was hidden behind a character, and I’m sure you’ll love it.

Charles Chaplin, the man behind the character

Maybe you’re familiar with certain unforgettable films like “The Gold Rush (1925),” “Modern Times (1936),” or “The Great Dictator (1940).” They are true icons in cinema that serve as cultural legacies, continuing to form a part of our history and society. His humor was entangled with tragedy but always brought out smiles. He was a breath of fresh air among the cynicism and tragedy that often characterizes people.

For many, cinema wouldn’t be the same without Charlie Chaplin. Perhaps someone else would have come along, but Chaplin’s impact is undeniable – he was an innovator in the realm of film and acting.

But, we’re talking about happiness.  Do you know anything about the man hidden behind the character of funny walks? He was an immensely gifted artist and actor. He was an acrobat with a natural comedic instinct. But his comedy was of a tragic sort – it was bittersweet.

He was the man of a thousand faces: an actor, director, musician, screenwriter, producer, etc…The list goes on. But before anything else, he was a man who overcame adversity from a very young age. He grew up in abject poverty. Almost completely without the means to survive, he earned what he could on the stage, always in the world of entertainment but poverty and hunger were always close by.

His family was just another example of broken relationships in his life where there is no room for safety and security to grow. There was little attachment among them. His father never worried too much about him and his siblings, and his mother, despite also being a stage performer, suffered from serious mental illness that forced her to be confined in sanatoriums for long periods of time, away from the rest of the family.

Behind the character, under his great big shoes, his cane, and his dusty vest, was a man who learned how to invent himself in order to survive; someone who knew how to draw smiles from tragedy and connect with a public that was very familiar with the themes he explored.

Chaplin was a craftsman of emotion, and as such, left a legacy not only through his films, but through written word. I will leave you with the following poem, a great example of his legacy. I hope it serves you somehow:

Life is a play that doesn’t allow testing
So you must sing, laugh, dance, cry and live intensely each moment of your life before the curtain closes and the play ends without applause.

Smile! But don’t you hide behind that smile. It shows what you are, without fear… There are people who dream of your smile, as well as I.

You go and live! Try! Life happens in an attempt to live.

Love above all, to everything and everyone love.

Do not close your eyes to the dirt of the world,

do not ignore the hunger.

but soon do something to combat it,

Looking for what’s good in everything and everyone.

make them your reason for living.

Understand people who think different to you,

do not criticize them…

Look at your back, friends…

Did you make someone happy already today?

or did someone suffer from your selfishness?

Why such a hurry?

Running is only fear within you.

But do not prejudice anyone,

and do not transform your dream on to them.

There will always be a way out,

Do what you like…you must feel what is inside you.

Listen to what others have to say, it is important.

and climb the steps for what you want to achieve.

But don’t forget those who failed to climb the ladder of life.

Find out what is good within you…

Try above all as people,

I must tell you all of that,

simply because you exist…

Problems also represent new opportunities, which is a truth that has been proven over and over again. It's also something…