Ludwig Binswanger was the first existentialist psychiatrist. Thanks to him, psychologists started paying attention to the patient's personal reality and context. 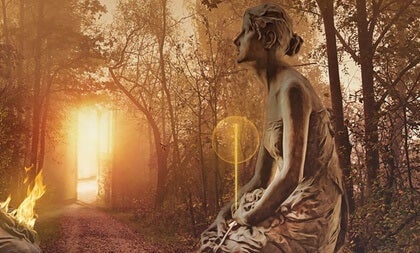 Ludwig Binswanger was a Swiss psychiatrist and writer who introduced the term Daseinsanalyse (Daseinsanalysis) into the field of psychoanalysis. With this term, he referred to the fact that human beings were open to any experience. Therefore, the patient’s psyche isn’t an isolated entity or reduced to its own processes. An individual’s behavior is, in a way, defined by their environment and their interpretation of it.

Few figures in the psychoanalytic school were as close as Ludwig Binswanger and Sigmund Freud. Although they differed a lot at a theoretical level, they always admired each other. They sent letters to each other very often and even Freud himself offered Ludwig refuge during World War II. Both of them enriched the foundations of this therapeutic school.

Ludwig Binswanger was the first existentialist psychiatrist. The works of authors such as Edmund Husserl and Martin Heidegger greatly inspired him. This allowed him to approach every patient’s reality in a unique way. Moreover, he put aside that limited perspective that stated that a therapist would only focus on the individual’s pathological aspects. For the first time, therapies started focusing on the human being’s reality, circumstances, and context.

In 1956, he received the Kraepelin medal, the highest distinction in the field of psychiatry. At the time, he was admired by everyone around him. Artists, musicians, poets, writers, and philosophers such as Ortega y Gasset, Martin Buber, or Heidegger established a friendship with this key figure in the history of psychology.

Ludwig Binswanger, a figure with his own voice

Ludwig Binswanger was born in Kreuzlingen, Switzerland, in 1881. We certainly can’t ignore the relevance of this European city as the key to the birthplace of psychoanalysis. At the beginning of the 20th century, at the University of Zurich, it was possible to see gatherings between such emblematic figures as Carl Jung and Eugen Bleuler.

In fact, both of them were Binswanger’s colleagues. However, the one figure he’d always say marked his academic and professional life was, without a doubt, Sigmund Freud. Their friendship lasted a lifetime and was decisive, especially when Binswanger was diagnosed with a malignant tumor in 1912. Their bond gave him strength and determination during this tough time.

Once that trance was over, it wasn’t long before he joined the “Freud Group”, the theoretical nucleus that Carl Jung led in Switzerland. Now, we must note that, although he had a faithful friendship with and admired Sigmund Freud, Ludwig Binswanger had his own ideas about what clinical psychiatry should be about.

His individual perspective strayed a lot from classic psychoanalysis.

The pioneer of existential psychology

Ludwig Binswanger was the medical director of the Bellevue Hospital in his hometown of Kreuzlingen from 1911 to 1956. In fact, his grandfather founded this internationally renowned clinic. Moreover, Binswanger used this place to innovate on new therapeutic foundations. So much so that many people know him as the first doctor to combine psychotherapy with existential and phenomenological philosophy.

In 1942, he wrote the book Basic Forms and the Realization of Human “Being-in-the-World”. In this piece of work, he introduced the term Daseinsanalyse right off the bat and talked about making use of existential analysis as an empirical science. Its purpose was undoubtedly the most innovative in the psychoanalytic field. It’s based on the following premises:

The theoretical contributions of Ludwig Binswanger

Ludwig Binswanger was a pioneer in the creation of the existential psychology school. Thanks to him, it was possible to understand the complexities of human existence and the relevance that this had in the clinical field.

He wrote almost a hundred articles, books, reports, and methodological criticisms of psychoanalysis. One of the most popular ones is Die drei Grundelemente des wissenschaftlichen Denkens bei Freud (The Three Fundamental Elements of Freud’s Scientific Ideas; 1921).

He subjected psychoanalysis to improvement. He discarded the methodology that was being used and, instead, he introduced the foundations of Edmund Husserl’s phenomenology and Wilhelm Dilthey’s hermeneutics.

Binswanger’s unique perspective showed that every individual is free to build the type of existence they want. There’ll be those who want to dedicate their lives to art, others to the world of business, others will want to spend their lives helping others, etc. Existence transcends being and each subject is free to take the existential path they choose.

In turn, he defined three very specific types of existence:

Love can change you

Another very interesting concept by Ludwig Binswanger was Being-beyond-the-world. With this idea, the Swiss psychiatrist referred to the fact that it’s in every individual’s power to change the circumstances that make them uncomfortable and unhappy. Their free will makes this possible.

The orientation of Binswanger’s train of thought, the so-called Daseinanalyse (or existential analysis) spread throughout Europe and the United States in a short time. To this day, his legacy remains one of the most interesting trends in contemporary psychology.

Ludwig Binswanger passed away in 1966 in his hometown of Kreuzlingen. He was 75 years old.

Existentialism According to Rollo May
Rollo May was born in Ohio (United States) in 1909. Existence and freedom were the central themes of his analysis. Read more here! Read more »
Link copied!
Interesting Articles
Clinical Psychology
Irrational Thoughts Aren't Negative Thoughts