In this article, we're going to tell you about Emil Kraepelin, the father of modern psychiatry. Learn more about this man and all the fascinating research he did into the human mind. 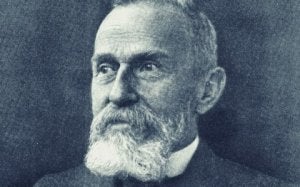 The name Emil Kraepelin is one of the most important in the history of medicine. He’s basically the father of modern psychiatry, psychiatric genetics, and psychopharmacology. He was also the main figure in promoting the field of biological psychiatry, which sees mental illness as a biological issue.

Emil Kraepelin developed his theories at the beginning of the 20th century, but they’re all still important in psychiatric practice even today. At the same time, his ideas have also been criticized for being “too scientific.” In the end, it’s unthinkable not to at least be familiar with his ideas as a psychiatrist.

The life of Emil Kraepelin

Kraepelin was born on February 15th, 1865 in Germany. He studied medicine in various places, though mainly at Leipzig University. He was always very interested in the human mind, from the moment he began.

That led him to take a course in experimental psychology with Wilhelm Wundt, the creator of the field. Then, he became a psychiatric assistant.

He graduated in 1874 with a thesis titled “The Influence of Acute Illness in the Causation of Mental Disorders.” Later on, he studied neuropathology and began to do research about psychopharmacology and psychophysiology. He also worked at several mental hospitals and went on to become a professor at Dorpat University (in Estonia) in 1886.

In 1922, he became the chair of the German Institute for Psychiatric Research in Munich. He was already world-renowned by that time. He had made a lot of progress in developing his theories, with very detailed research and exhibitions that involved painstakingly minute observations about people with “mental illnesses.”

Kraepelin’s first major work was the Compendium of Psychiatry. In it, he talked about the many observations he’d made in the countless clinical cases he had in mental hospitals.

It was a pioneering work in the field of psychiatry. He described their symptoms in extreme detail and tried to classify their illnesses based on those symptoms. He was only 27 when he published the book.

The second and third editions of the book changed the name “compendium” to “treatise.” In these later editions, Emil Kraepelin introduced the concept of the evolution of an illness, which was a key part of making a differential diagnosis. He also added a chapter about catatonia.

In the fourth, fifth, and sixth editions, he went on to talk about processes of mental degeneration. Those processes included catatonia, premature dementia, and paranoid dementia. He also introduced the concept of “manic depressive insanity.”

In other words, he continued to fine-tune his definitions and broaden the content from edition to edition. The eighth edition was over 2,500 pages long.

One of the most interesting moments in the history of cognitive science is when Emil Kraepelin saw a patient who ended up becoming famous, but not because of him. The man was Sergei Pankejeff, who Kraepelin wasn’t actually successful with. He ultimately diagnosed Pankejeff with manic depressive disorder.

The very same man went on to see Sigmund Freud. He went on to become famous in the history of psychoanalysis under the nickname “Wolf Man.”Freud diagnosed with a “neurotic obsessive” disorder.

Emil Kraepelin’s classifications of various mental illnesses have gone on to become the basis of modern psychiatry. His theories stood out over all the others during his time and he became very prestigious. He wanted psychiatry to have a more solid, scientific reputation, no matter the cost. This is why all his research was so rigorous.

Kraepelin also took an interest in studying the mental illnesses in other cultures. This acted as the basis for the fields of ethnopsychiatry and cross-cultural psychiatry. He actually traveled several times to Mexico, Spain, Indonesia, India, and the United States to gather information. He called it “comparative psychiatry.”

Emil Kraepelin died at 70 years old in Munich, Germany. By that time, he had already set the foundation for all of the modern psychiatry with his wide body of work. Even though there are people who question some of his ideas, there are still many psychiatrists who are faithful to his theories.

The Renaissance Of Anti-Psychiatry
Antipsychiatry was a movement which protested against psychiatric methods in the 60s and 70s. Read on to see whether it still has a voice today. Read more »
Link copied!
Interesting Articles
Psychopharmacology
Lorazepam: What Is It and What Are the Side Effects?